The Return of Instability to the Horn of Africa

The Horn of Africa comprises six (five sovereign and one de-facto) States: Sudan, Eritrea, Djibouti, Ethiopia, Somalia and the self-governing state of Somaliland. As per demography and geography, Ethiopia, Sudan, and Somalia are large States in the region. Ethiopia is the second-largest State in Africa in terms of demography (with an estimated population of 110 million). The region was in turmoil in the 1980s and 1990s on account of civil wars in Ethiopia, Somalia and Sudan as well as inter-State conflict between Eritrea and Ethiopia. At the turn of the century, Horn of Africa seemed to stabilize with Ethiopia emerging as an engine of economic growth. However, the instability has returned to the Horn. There are no signs of stability returning in 2022.

The most serious crisis has been brewing in Ethiopia with the future of the country at stake. Since November 2020, Ethiopia has been fighting a civil war with the northern rebels of the Tigrayan People’s Liberation Front (TPLF).[1] The region of Tigray saw the coordinated military operations by Ethiopia’s federal troops and the Eritrean military.[2] However, the fortunes of TPLF and Ethiopia’s federal government have shifted rapidly. Meanwhile, the Tigray, located at the crossroads of Sudan, Eritrea, and Ethiopia, is staring at a massive humanitarian crisis with severe shortages of food and medicines.[3] International aid agencies have not been able to supply much-needed assistance and the famine looms in the face of blockade of the land-locked region imposed by Ethiopia’s federal government. 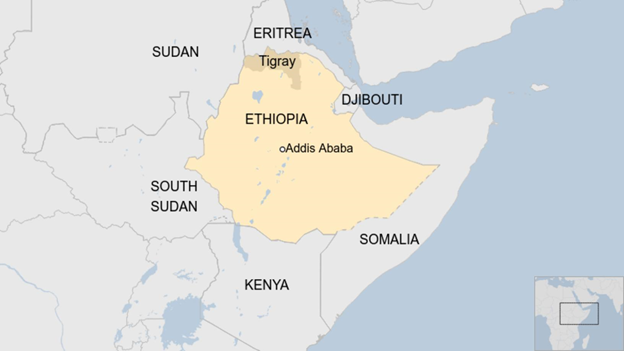 Meanwhile, on the battlefield, the TPLF has been on the retreat. As the pressure on Tigray mounts, the role of Sudan and Eritrea will be critical. The Ethiopian government has been arming itself with the help of foreign powers like China, Turkey, Iran, and the United Arab Emirates (UAE).[4] The role of unmanned aerial vehicles (UAVs), better known as drones, has proven to be a game changer that tilted the balance in favour of the Ethiopian government.[5] (An interesting and related side note here: the role of drones in varied battlefields such as Azerbaijan-Armenia, Libyan civil war, and now Ethiopia has come under scrutiny and military experts, the world over, are carefully following the trajectory of these conflicts to draw appropriate lessons out of it.)

In next-door Sudan, with the dismissal of the civilian Prime Minister (PM) Abdalla Hamdok by the military in October 2021, the fragile political balance of post-al-Bashir Sudan has been thrown off the cliff. The country is in the grip of protests ever since and the unexpected return, and equally shocking resignation, of the civilian PM has not calmed the protesters.[6] If anything, it has dented the image of the military. Sudan has been undergoing a difficult political transition since 2019, when the long-standing Sudanese dictator Omar al-Bashir was forced to resign, and a hybrid civilian-military government came up to oversee the transition to the democracy.[7] The current political crisis allegedly engineered by the military has raised serious doubts about the future prospects of the transition.

The regional security scenario is further complicated by border tensions between Sudan and Ethiopia as both countries claim a portion of land known as al-Faqsha (which is currently under the control of Sudan). Moreover, the construction of the Grand Ethiopian Renaissance Dam (GERD) by Ethiopia and the sharing of Nile waters is another contentious point in the Horn of Africa. Located downstream, Sudan and Egypt are worried about the GERD and its impact on the flow of Nile. Egypt and Sudan are strengthening their relationship and all three countries have hardened their positions over this issue. These inter-state disputes over land and water are contributing to the instability in the Horn of Africa.[8]

While the turmoil in Sudan and Ethiopia are dominating the global news cycle, the ever-brittle Somalia has not been able to hold an election even after the term of the current President Mohamed Abdullahi Farmaajo ended in February 2021. On the contrary, Somalia’s PM Mohamed Hussein Roble and President Farmaajo, both representing different factions; are at odds with each other and the full-blown tussle for power continues with the country plunging into the further instability.[9] Somalia’s ongoing political crisis and the meddling by the Gulf powers have accentuated the situation.[10] The threat posed by Al-Shabaab, the Islamist terrorist organization operating out of Somalia, remains real and the political crisis will not enhance the prospects of security in a troubled country.

The cumulative impact of these developments has been the return of instability to the Horn of Africa. The challenge is further heightened by the difficulties of the economic recovery and the persistence of the Covid-19. The economic situation in Sudan, Somalia and Ethiopia remain grim. In fact, the International Monetary Fund (IMF) refused to publish the outlook for Ethiopia for 2022.[11] (The only other countries for which the outlook was not published are: Afghanistan, Syria and Libya.) Moreover, the vaccination rates across Africa are low and the Horn of Africa is no exception to this general trend. Ethiopia has managed to vaccinate only about 3.5% of its population.[12]

In addition to the instability in the strategically important region like the Horn of Africa, Libya, which is the northwest neighbour of Sudan, has not been stabilized. The much-awaited Presidential elections in the oil-rich North African state, scheduled for 24th December, have been postponed.[13] Adjacent to Libya and Sudan, in the central-west Africa, terror-affected states of the Sahel such as Chad and Niger are located. They are struggling to deal with the challenge of Islamist terrorism. And to the East, just across the Bab-el-Mandeb strait, the civil war rages in Yemen. However, from Libya to Yemen, the zone of instability is in the making with two exceptions: Djibouti and Eritrea. Notwithstanding the regional instability, these two states have managed to maintain internal stability. It is a function of a combination of factors including the smaller geographic and demographic size, and tight grip over politics and society maintained by the authoritarian regimes, led by long-standing rulers.

The challenge of stability and security will be further complicated as the region is the focal point of strategic rivalries between great powers like the United States, Russia and China. The competition for military bases has intensified in the region. For example, Djibouti hosts the military bases of the US, France, China and Japan whereas Russia intends to establish a base at Port Sudan. The instability will create opportunities for further increasing great power presence.

In this context, the year 2022 does not look promising to bring-in stability to the geostrategically important region of Horn of Africa which continues to remain riddled with intra and inter-state conflicts, Islamic terrorism, political turmoil, disputes over the control of land and water and economic as well as health challenges.

[5] Alex Gatopoulos, “How armed drones may have helped turn the tide in Ethiopia’s war”, Al Jazeera, December 10, 2021. Available at: https://www.aljazeera.com/features/2021/12/10/how-armed-drones-may-have-helped-turn-tide-in-ethiopia-conflict (Accessed on January 7, 2021).

[8] Christopher Rhodes, “Sudan and Ethiopia are nearing a fight over land and water”, Al Jazeera, September 15, 2021. Available at: https://www.aljazeera.com/opinions/2021/9/15/sudan-and-ethiopia-are-nearing-a-fight-over-land-and-water (Accessed on January 10, 2022) ; Shewit Woldemichael, “Ethiopia-Sudan border tensions must be de-escalated, Institute of Security Studies, May 10, 2021. Available at: https://issafrica.org/iss-today/ethiopia-sudan-border-tensions-must-be-de-escalated (Accessed on January 10, 2022)