It took only a tweet and a day for Donald Trump to make history by setting foot on the North Korean soil on June 30, 2019, the first sitting American President to have done so. But it took seven decades and a maverick Presidency to unwind the last living relic of the Cold War. The image of Trump and Kim shaking hands at the heavily militarised Demilitarised Zone (DMZ), the space that curates memories of the Korean War and reminder of the continuing ‘state of war’ in the Korean Peninsula, is not only watering down the hostility, but more importantly is seen to be setting a new normal for US-North Korea relations.

Under President Trump, US-North Korea relations have been dramatic and unprecedented. During the first year in office, Trump elevated the tension with North Korea to the brink of war. However, in 2018, Trump initiated unprecedented diplomatic manoeuvring that produced two Summit meetings and high-level diplomatic exchanges between Washington and Pyongyang. With the symbolic visit to North Korea, President Trump has taken the next step towards normalising US-North Korea relations.

Trump is the first US President to cross the DMZ but not the first one to visit the DMZ. Previously, five US Presidents have visited the DMZ; Ronald Reagan in 1983, Bill Clinton in 1993, George W. Bush in 2002 and Barak Obama in 2012. Traditionally these visits have been used to send a hard-line message to Pyongyang and show the strength of US-Korea alliance. Such visits were also intended to reinforce the image of North Korea as an isolated, brutal and strange country ruled by dictatorship. In contrast, Trump’s visit to the DMZ in civilian attire, compared to previous presidential visits in military fatigues and body armour, presented a friendly and positive image of US-North Korea relations. 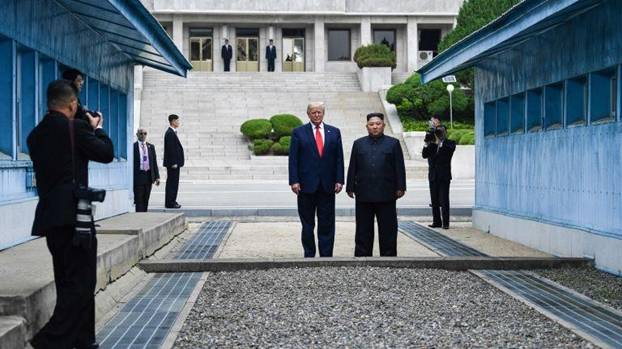 Until the Trump Presidency, US President’s visit to North Korea or a Summit was inconceivable, as it would have been seen as a source of legitimacy to the regime in Pyongyang. Having had two meetings with Kim and a symbolic visit to North Korea, President Trump used the Summit as an instrument for a diplomatic breakthrough, a departure from Washington’s traditional view as a reward for North Korea’s behavioural change.

Madeline Albright, Secretary of State, who visited Pyongyang in October 2000, had been so far the top US official to visit North Korea. Two former Presidents have also visited North Korea. Former President Jimmy Carter so far made three trips to Pyongyang. His first visit in June 1994, during which he met Kim Jong-un’s grandfather and then leader Kim Il-sung helped to produce a breakthrough in the relationship between the two countries during the first nuclear crisis.1 Carter made return visits to Pyongyang in August 2010 and April 2011 to arrange the release of an American captive and deal with a food shortage in North Korea respectively. Former President Bill Clinton made a surprise visit to Pyongyang in August 2009 to negotiate the rerelease of two American journalists. 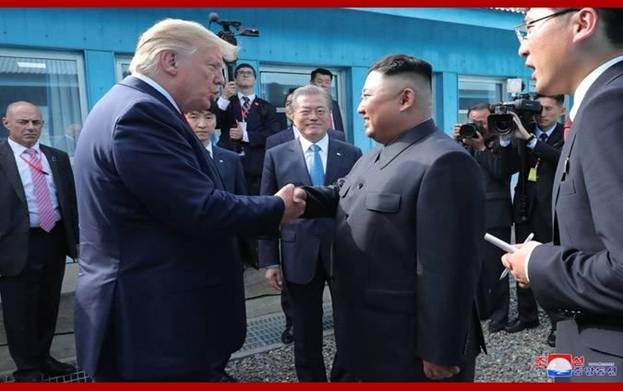 The three way meeting of President Trump, Chairman Kim and South Korean President Moon Jae-in at the DMZ, is also indicative of the continuity and preference for a top-down approach to resolving the problem in the Korean Peninsula. This top-down approach of Trump came under pressure after the failure of the dialogue at the Hanoi Summit in February early this year. The use of an impromptu meeting between Trump and Kim to impart momentum to restart the US-North Korea nuclear negotiation illustrates the belief of the leadership in the effectiveness of a politically driven top-down approach in comparison to the technically oriented bottom-up dialogue process.

While the unorthodox methods of President Trump have helped reduce tensions and create a conducive environment for dialogue, not much progress has apparently been made on the denuclearisation front. The agreement reached between Trump and Kim to restart the stalled nuclear negotiation is indicative of the political will to overcome the Hanoi failure. As far as the nuclear issue is concerned, two parties are now back to the post-Singapore Summit outlook, but possibly with a better understanding of each other’s position on the issue.

The role of the working level negotiation is to draft a roadmap for implementing the agreements reached between the two leaders during their meeting in Singapore in June 2018, mainly on improving US-North Korea relations, denuclearisation of the Korean Peninsula and building a peace regime to replace the armistice. The failure to reach a deal in Hanoi revealed the substantial difference in their negotiating positions, particularly the difficulty in coming up with a definition of denuclearisation.

In Hanoi, Washington proposed a grand bargain or “all or nothing” approach predicated on an all-inclusive agreement that included a clear picture of the end state of denuclearisation. On the other hand, Pyongyang remained firm to its “synchronous and phased” approach demanding a series of gradual agreements based on the principle of ‘action for action’, while leaving the end state of denuclearisation open. The fundamental difference in their positions led the US to reject North Korea’s offer to demolish the Yongbyong nuclear facility in exchange for relaxing key sanctions that are affecting public livelihood. Washington reasoned that Yongbyong was not enough and proposed the withdrawal of all sanctions for the complete shutdown of North Korea’s nuclear programme.

Personal chemistry and goodwill developed between President Trump and Chairman Kim may not last long if no progress is made on the denuclearisation front. Given the domestic political compulsions, upcoming Presidential elections in the US and the deteriorating economic situation in North Korea, the incentives are high for both Trump and Kim to maintain the momentum to reach a deal. The DMZ meeting is indicative of the high stakes in the political game that forms the subtext of the Trump and Kim interaction.

Meanwhile, the US Special Representative for North Korea, Stephen Biegun has lately been stressing the need for a flexible approach and expressed Washington’s willingness to approach the negotiation “simultaneously and in parallel”, a position comparable to North Korea’s “synchronous and phased” approach. Though in principle Biegun rejected the idea of relaxing US sanctions, but he did say that there are “things we can do in the meantime,” including concessions such as humanitarian aid, people to people exchange and opening of liaison offices. His remark about US’s acceptability of “a freeze (of North Korea Nuclear programme)” during the denuclearisation dialogue a sign could well be of Washington’s changing negotiation posture.

The agreement to restart the stalled negotiation process is welcome news not only for US- North Korea relations, the momentum of which appeared to have been lost after the Hanoi Summit, but more importantly for regional peace and stability. While it is true that the DMZ meeting of Trump and Kim imparted fresh energy in US-North Korea dialogue, finding common ground on the nuclear issue is not going to be easy. However, what is more significant about the highly personalised diplomacy between Trump and Kim is its positive impact on lowering structural and perception gaps between the two countries.

1The standoff between North Korea and the United States during 1992-94, following North Korea’s announced intent to withdraw from the nuclear Nonproliferation Treaty (NPT) is referred to as the first nuclear crisis. Former President Jimmy Carter’s visit to Pyongyang helped diffuse the two year standoff, paving the way for the signing of 1994 Agreed Framework between the two countries. See, Creekmore, Marion V. (2006), A Moment of Crisis: Jimmy Carter, the Power of a Peacemaker, and North Korea's Nuclear Ambitions, New York: Public Affairs.