Major aspect of President Jinping’s visit that has made Western observers and European allies particularly concerned — Italy's decision to sign up to Beijing's Belt and Road Initiative, as well as other trade and infrastructure agreements. While President Xi also signed multi-billion-dollar deals with French President Emmanuel Macron, however the French leader has refused to endorse the BRI.

Chinese Premier Xi Jinping visited Italy, Monaco and France between 21-26 March 2019. The most crucial outcome of his visit to Europe was that Italy became the first member of the G7 and the first founding member of the EU to officially endorse the Chinese Belt and Road Initiative (BRI). Although, other smaller European member states like Greece and Portugal have substantial investments from China, Italian endorsement of the initiative carries much more weight as it is the fourth-largest economy of the Eurozone after Germany, UK, and France and the eighth largest in the world. Therefore, the signing of the MoU between Italy and China has implications on both Chinese presence in Europe and its relations with its traditional partners – namely the US and the European Union.

In the first leg of his European tour, Chinese President Jinping visited Italy from 22-24 March 2019. During the visit, China and Italy signed 29 agreements worth €2.5 billion in various sectors like energy, services, steel plants, etc. Di Maio, the Italian deputy premier, said the potential value of those business accords with the Chinese is as much as €20 billion, giving the economy a much-needed boost. The business deals involve firms such as energy giant Eni SpA, gas pipeline operator Snam SpA, engineering company Ansaldo Energia SpA, and bank Intesa Sanpaolo SpA.

However, the most important outcome was the signing of a MoU to join the BRI. Two agreements were signed with China Communications Construction Company (CCCC) to develop and manage the Italian ports of Genoa and Trieste. While Genoa is the most important seaport for Italy, Port of Trieste assumes more significance for China. The port offers a link from the Mediterranean Sea to landlocked countries like Austria, Hungary, the Czech Republic, Slovakia and Serbia, all of which are markets that Beijing hopes to reach through its BRI programme. CCCC will develop the rail infrastructure around the port to “increase of the influence of the port of Trieste both in Central Europe and in the Chinese maritime markets.”1

Image 1: Connectivity through Port of Trieste 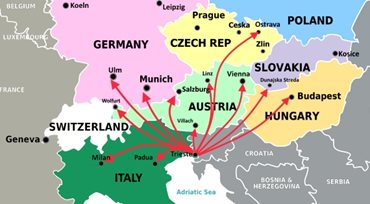 In the second leg of the visit, President Jinping visited Monaco and France. Xi’s visit to Monaco marked the first state visit by a Chinese head of state. President Xi’s visit to France marked the 55th anniversary of the establishment of diplomatic ties between Beijing and Paris. During the visit, President Macron and President Jinping signed 15 business contracts almost worth €40 billion, including a 300-aircraft order with Airbus costing 30 billion euro and a €1 billion contract for EDF to build an offshore wind farm in China. France’s Fives and China National Building Materials Group also signed a €1 billion agreement to cooperate on energy savings in developing countries. Shipping line CMA CGM and China State Shipbuilding Corporation signed a €1.2 billion deal to build 10 container ships.2

Analysis of the Visit

President Jinping’s visit to Europe came at a time when the EU in its Strategic Outlook, released on 12 March 2019, called China a ‘strategic competitor and a systemic rival’3 and had raised various concerns regarding lack of access to the Chinese market, subsidies to Chinese state-owned enterprises that are buying European companies, forced technology transfer and exclusion from major Chinese projects. Evidently, this has not stopped countries in Europe to seek further cooperation with and investments from China. If looked at more closely, China’s strategy towards EU member states is customised to each country’s key needs. For instance, in the case of Italy, Chinese funding for infrastructure projects is the best incentive to the Italian government to support its flagging economy. However, the Italian endorsement of Chinese BRI also came at a time when Euro-Atlantic relations are sensitive; the US is working towards countering China’s growing political and economic clout worldwide and at a time of rising differences within the Italian government. The Deputy Prime Minister Matteo Salvini, who heads the far-right League, has warned against the risk of China “colonialising” Italian markets.4 Chinese strategy for France, on the other hand, presented a very different picture as it focuses on increasing imports of French goods (especially for aircraft and aerospace industry) as well as access to the Chinese market for French financial institutions (banks and insurance in particular).5

The endorsement of BRI by Italy has been criticised not only by the US but also by the EU member states. White House spokesman Garrett Marquis tweeted that “Italy is a major global economy and great investment destination. No need for Italian government to lend legitimacy to China’s infrastructure vanity project”. He further added that “We are sceptical that the Italian government’s endorsement will bring any sustained economic benefits to the Italian people, and it may end up harming Italy’s global reputation in the long run”.6 The Vice-President of the European Commission Jyrki Katainen warned Italy of a debt-trap and said that, “if the BRI is providing financing to the projects, it means that the member states must pay the loans back. So, there are no free lunches”7. The German foreign minister, Heiko Maas, also expressed a warning for Italy, “if some countries believe that they can do clever business with the Chinese, and then they will be surprised when they wake up and find themselves dependent.8”

While the rapprochement between Rome and Beijing represents in some ways an Italian snub to the European concerns, it has also alarmed Italy’s European allies, who consider it to be a strategic error to let Chinese companies acquire EU infrastructure such as ports. During the visit, the French President made it a point to present a united European front by inviting German Chancellor Angela Merkel and European Commission President Jean Claude Juncker to join him in the talks with President Jinping. The leaders said that they wanted a fairer trading relationship with China, signaling an openness to engage with Beijing’s “Belt and Road” infrastructure project if it meant more access to the Chinese market, with German Chancellor saying that, “we, as Europeans, want to play an active part (in the Belt and Road project)… That must lead to certain reciprocity, and we are still wrangling over that a bit”9. To this Commission President Juncker added that “European businesses should have the same degree of access to the Chinese market as Chinese businesses have in Europe.”10 The French President, on his part, said that competition and cooperation were natural but that Europe and China must strengthen multilateralism, referring to WTO, through deeper cooperation. He also pushed against China’s human rights record saying, “the European Union is based on respect for individual freedoms and fundamental rights,” referring to Beijing’s alleged mistreatment of Muslim Uighurs.11 He added, “that’s why France brings this issue up in its dialogue with China to express concerns that are ours and those of Europe on the question of respecting fundamental rights in China.”12

President Jinping’s visit to Europe came at a time when the Europeans have expressed serious concerns about China’s rise, having recently declared Beijing a systemic rival. His promotion of the BRI as a global infrastructure program have raised concerns within the EU that this initiative is an effort by China to project its influence internationally through projects in various sectors. It is true that when it comes to BRI, Europe is divided as some countries such as Greece and Hungary are enthusiastic about cooperation; others such as Sweden remain ambiguous, while France and Germany seem increasingly hostile to China, seeing a growing economic threat. The Italian government has defended its decision to sign the BRI agreement and has said that it is sensitive to its allies’ concerns.

The EU is unlikely to welcome the deal, at a time when it is doubling down on efforts to challenge China’s search for influence. The European Union has finalised a EU-wide FDI screening mechanism, giving individual member states a legal framework that they could adopt voluntarily, allowing them to review cases on national security grounds, as well as economic and competition aspects. Despite this, Europe’s lack of cohesiveness and countries’ divergent views on how best to engage with China are the primary challenges for the EU in formulating a comprehensive strategy for Beijing.

5 Takeaways from Xi Jinping’s visit to France and Italy and ideas for the EU-China summit, Bruegel, 27 March 2019, http://bruegel.org/2019/03/takeaways-from-xi-jinpings-visit-to-france-and-italy-and-ideas-for-the-eu-china-summit/, Accessed on 1 April 2019