The successive conduct of elections since 1999 is a positive sign of democratic consolidation in Indonesia and its resolve towards ensuring its sanctity.

On April 17 2019, over 185 million strong Indonesian electorate will participate in the country’s 12th general elections and its first simultaneous legislative and Presidential elections. This exercise is the second largest one-day election in the world - just behind that of the US – while India being the largest democracy goes into polls in a phase manner1. Indonesia’s 2019 national election would be the fifth successive elections2 since the reformasi period which concluded before the turn of the 21st century in 1999. The following paper looks at the upcoming 2019 elections as a testimony to the democratic political institutions and practices gaining ground in contemporary Indonesian polity and society.

Deepening of Democracy in Indonesia

Indonesia is a representative Republic whereby the President is both the head of State and of Government. The 1945 Constitution of Indonesia is the foundation for the country’s system of Government, which provides for a limited separation of legislative, executive and judicial powers. Plans were put in place for Indonesia to hold its first free general elections since the 1950s3.However, elections at that time were considered more western in style and did not fit in line with Indonesian culture. During President Suharto’s regime, five political laws were introduced in 1985. These laws were widely regarded as the legal cornerstone of the New Order4, and made it impossible for any opposition party to win power. There was a strong pressure from the reformasi movement for a speedy election, after the fall of Suharto and the installation of the interim government under Bacharuddin Jusuf Habibie on May 21 1998. President Habibie made it a priority to revise the 1985 political laws in order to ensure a more acceptable system of elections so that representations could be accommodated within the existing 1945 Constitution.5 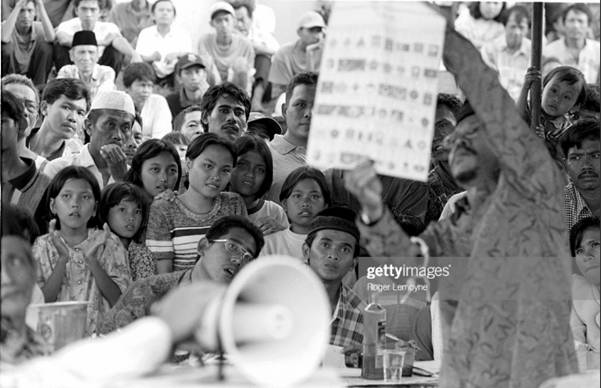 The reformasi movement led to significant amendments to the Constitution, impacted all three branches of government, added important human rights provisions and for the first time inserted the concept of ‘election’ into the constitution.6After the Indonesian Parliament ratified the three political laws concerning political parties, general elections and the composition of parliament on June 7, 1999, the way was paved for the conduct of elections. The Indonesian parliament consists of the House of Representatives (Dewan Perwakilan Rakyat/DPR) and the Regional Representative Council (Dewan Perwakilan Daerah/DPD) both elected for a five-year term. While the DPR is an existing body established by the 1945 Constitution, the DPD was formed in 2001 through an amendment to the Constitution in a move towards bicameralism. The DPR has a total of 560 representatives while the DPD has 132 representatives.7 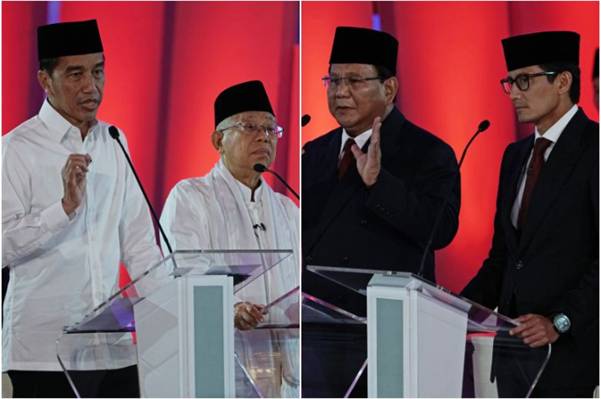 The 1945 Constitution was also amended to subject the once powerful, party-centred Presidency to popular election and limited it to a maximum of two five-year terms. The Presidential nomination for the election is determined by the candidates demonstrating support from parties in the DPR. A candidate team for the President and Vice-President needs to show they have the support of parties commanding at least 20% of seats in the current DPR or 25% of the votes their parties secured in the last election. For the impending election of 2019, the candidacy of the incumbent President Jokowi and his running mate Maruf Amin is being supported by nine parties. Collectively this coalition represents 60% of seats in the Parliament and 62% of all votes from the last elections.  Their coalition has a face-off against Lt Gen (ret) Prabowo Subianto, and Sandiaga Solehuddin Uno, the Deputy Governor of Jakarta, as his running mate. This coalition is supported by Mr Prabowo’s party (Gerindra) and other four major parties that collectively represent 40% of seats and 36% of all votes from the last elections. To win the Presidential election the candidate must secure over 50% of the popular vote. If no candidate secures 50% of the vote in the first round then the top two candidate pairs face-off in a second round.8At the 2019 National Elections voters for the very first time would elect members to the DPR, DPD and Regional Legislative Council (DPRD) members concurrently with the President and Vice President.9

Dr Patrick Ziegenhain who is currently a Visiting Professor at the Atma Jaya-University in Jakarta, have been sceptical of the certainties in Indonesia’s transition to a transparent and stable democracy. According to him the country faces numerous obstacles like powerful vested interests of the previous and current regimes, an immature party system and existence of centrifugal forces of separatism. Nevertheless, he also explained that the pace of democratisation in Indonesia is being undertaken carefully with a long term perspective. Incremental changes being introduced through reforms, like the case of its election process, indicate that Indonesia has chosen a longer but a more certain road to democracy and prosperity.10

Today, Indonesia has moved from the once authoritarian government system to a democratic political system, and enjoys a  broader public legitimacy with an increasing role of extra-parliamentary actors from civil society. The conduct of its elections in a timely manner since 1999 is one such indicator that democratic consolidation in Indonesia is today on a positive trajectory. Indonesia’s ongoing transition towards a complete democratic system has enabled it to create the right ecosystem for further Constitutional amendments. These constitutional reforms have in turn enabled the setting up of more stable structures and procedures that determine the rules governing political decision-making. The revival of Islamic politics in Indonesia since the fall of Suharto remains to be a concern. However, Indonesia which has the two largest member-based Islamic civil society organisations – Nahdlatul Ulama and Muhammadiyah – in the world is not in support of Indonesia becoming an Islamic State or the establishment of Sharia as the only source of law. Further, it needs to be mentioned that the very strong popular support for non-denominational parties such as the Indonesian Democratic Party of Struggle – to which the incumbent President Jokowi belongs – indicates that the majority of Indonesians do not vote on religious lines. The deepening and widening of democracy in Indonesia has created the right signals for further expanding partnerships with other nations in the area of economics and security. Further, the stable political environment has enabled new developmental agenda under its Global Maritime Fulcrum (GMF) announced by President Jokowi in 2014, to attain an accelerated momentum for growth and stability.