The protests against President Sebastine Pinera and his government’s decision to increase subway fares by 3% have transformed into a national uprising of the people demanding dramatic changes in the socio-economic and political system of the country. It is becoming Chile’s worst unrest in decades, reminding people of the protests that preceded the fall of General Pinochet’s dictatorship.

Violent protests in Chile have forced President Sebastian Pinera to cancel the COP-25 Summit and APEC Summit 2019 to be held in Santiago scheduled for December and November 2019, respectively. Chile has also cancelled international football and other sporting events due to the ongoing demonstrations. The cancellation comes amid massive protests and riots of an intensity the country has not seen since the last days of General Augusto Pinochet’s dictatorship. The protests have led to more than a dozen deaths and millions of dollars in damage to property and affected local economies.

The unrest in Chile started with students demonstrating against the government’s decision to raise the rush hour metro prices by 3%[1]. In response to the public demands for a reversal, the then Minister of Economy Juan Andres Fontaine announced that those upset with the price rise could wake up earlier and pay a lower rate. The remarks led students to call for mass fare evasion. The efforts by the police to stop the students shifted the protests to the streets of Santiago, from where they have spread. President Pinera’s comments that the country was ‘at war’ against “a powerful enemy” after the protests started and his government’s decision to deploy the military to control crowds, enforce curfews and detain people, reminded many of militarisation under General Pinochet providing added momentum to the unrest. While the state of emergency declared by the government immediately after the protests started has been lifted[2], demonstrations have continued, with protestors now demanding the resignation of President Pinera and a new constitution. ‘Although it has undergone many reforms over the decades, Chile's current constitution was written by a small commission during General Pinochet's rule. Protesters want a participatory constitutional assembly to draft a new constitution, laying the foundation for a state representative of all Chileans and their priorities.’[3]

As the protests have grown, they have broadened into nationwide daily demonstrations against low wages and pensions, increasing cost of living, poor healthcare and education systems, lack of a social security and widespread inequality between the rich and poor. According to the UN Economic Commission for Latin America, while poverty has reduced in the South American nation, 1% of the population owns close to 27% of the country’s wealth.[4] There is a growing disillusionment at how millions of citizens have been frozen out of the country’s economic rise. 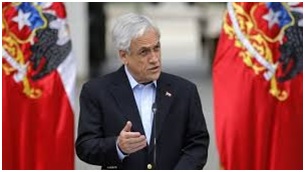 In an effort to break the impasse, President Pinera has reversed the metro fare hike, reshuffled his cabinet and announced reforms in pension and wage programmes, which still need to be approved by the Congress. His efforts have not halted the protests. The opposition parties have met President Pinera after his call for a dialogue, nonetheless, the lack of common points of agreements have meant a solution to the social unrest is not in sight.

The waves of protests in Chile, along with similar protests in Ecuador and now Colombia have highlighted fragilities behind the image of sound economic management and prosperity in these countries. These countries do have growing economies, boast of a growing middle class and reduced poverty; nonetheless, prosperity has been uneven and has left a vast majority of population out of it. In Chile, market friendly policies have encouraged private enterprises to invest more, with the government restricting its spending. It is one of the few countries of the region where education and housing are not guaranteed. The high cost of education has increased levels of debt. The global economic slowdown coupled with a weak currency has meant that the government has less money to spend on public services. This has further pushed the average Chilean to spend more on basic service and reduced savings. The financial insecurity is the main reason for the groundswell of protests. The recent vote against President Macri and the return of Cristina Fernandez de Kirchner as vice president of Argentina along with tensions in Bolivia as President Evo Morales returns to power has led to speculations of similar protests in the region.

To ensure that similar unrest does not rise in their respective countries, other leaders in the region would have to work to reduce the economic inequalities and improve social services. And they would have to do so in an environment of global economic slowdown and the end of the commodities boom, which over the years has raised expectations higher than ever. Today, much of Latin America has entered a long period of declining growth. Against the backdrop of stagnating wages and rising costs of living, issues such as inequality, corruption, lack of law and order and political repression have further compounded the situation. The governments of the region would have to implement a reform agenda that goes beyond populism to measures that boost economic health if they wish to overcome the simmering disillusionment and unrest.

[1] The protests started on 14 October and on 19 October the government had withdrawn the revised fares. However, the protests have continued.