The ongoing street protests in Baghdad and the Shi’ite dominated southern Iraq demonstrate the legitimacy crisis of the ruling Shi’ite elite and the ethno-sectarian power-sharing model of the post-Saddam Iraqi polity. Nationalist and non-sectarian in their outlook, the protests have received the backing of Ayatollah Sistani and Muqtada al-Sadr.

The most recent wave of anti-government protests in Iraq, which started in the beginning of October 2019, has so far left over 400 Iraqis dead. The death toll increased significantly on November 28, when protesters stormed and torched Iranian consulate in Iraq’s holy city of Najaf, and security forces opened fire on protesters, killing at least 28 people. On the same day, in the southern Iraqi town of Nassiriya, troops shot at protesters who were blocking a bridge, killing about 29 people. As the violence escalated, Ayatollah Ali Sistani, the marjaiyya (source of religious emulation) for majority of Iraq’s Shi’ite population, warned of civil war. In the Friday sermon released by his office on November 29, Sistani said that the government “appears to have been unable to deal with events of the past two months” and called on lawmakers to “reconsider” their support for the current government.[1] Subsequently, Prime Minister Adel Abdul-Mahdi tendered his resignation, which was accepted by the Iraqi parliament. Ayatollah Sistani has supported protesters’ demands for replacing Mahdi’s government with a government that will hold those responsible for the deaths, draft new electoral legislation, and form an independent election commission which will conduct an early parliamentary election under international monitoring.[2] 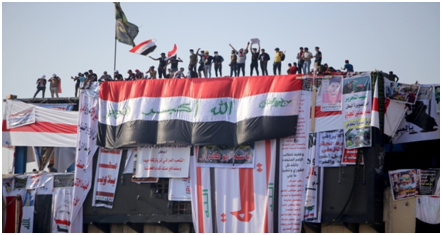 The sustained mobilisation at Baghdad’s Tahrir Square and other cities in the Shi’ite dominated southern Iraq is a powerful indication that Iraq’s Shi’i majority, having suffered under years of poor governance, has lost faith in the ruling Shi’ite political parties.

Structural Crisis of the Post-Saddam Iraqi state
Saddam Hussein’s Ba’athist state was a typical Arab socialist state, where an authoritarian regime, taking a nationalist populist line dispensed significant economic and social welfare creating a strong social base among peasants, workers and the middle class, but did not allow political space for civil society to develop.[3] Iraq’s transition to democracy, engineered from above by the US led invasion removing Saddam Hussein from power, was dominated by the exiled opposition parties. Lacking an organisational base inside Iraq, these parties organised their politics along primordial ethnic and religious lines and the new Iraqi polity was founded on the basis of an ethno-sectarian formula of ‘balance’ between different communities. The power-sharing arrangement has favoured elites by dividing up ministries and government institutions between ethno-religious power-blocs. The ethno-sectarian arrangement has not only precluded the development of coherent and rational state, it is also blamed by common Iraqis for the erosion of Iraqi national identity and facilitating external influence.

The US policy of supporting personalities in Iraq rather than pursuing good governance and the institutions of government has also contributed to current crisis facing the post-Saddam and post-ISIS Iraqi state.[4] In 2012, the United States continued to back the then PM Noor al-Maliki when Iraqi parliament brought a no-confidence vote against him for his ‘autocratic decision making’, interfering with functioning of parliament and security forces, and side-lining Sunni and Kurds.[5] Similarly, Iran is also blamed by Iraqis for cultivating Shi’ite parties and militias as a vehicle for its strategic and ideological influence in the country. Iranian-backed Shi’ite paramilitaries- Hashd al-Shaabi (Popular Mobilisational Forces) which played a crucial role in the fight against the Islamic State of Iraq and Syria (ISIS) are still in the process of being regularised into the Iraqi army. Their rise has undermined the role of Iraqi security and police forces, which continue to be trained by the North Atlantic Treaty Organisation (NATO) mission in the country.

From Islamism to Reform Populism
In early 2014, when ISIS had taken over Fallujah, 40 miles west of Baghdad, Noor Al- Maliki, the then PM belonging to the Iran-backed Shi’ite Dawa party, was busy projecting himself as the leader of the Shi’ite community under attack from Sunni extremists. Subsequently, Muqtada al-Sadr, the leader of the Shi’ite Sadrist movement, who had until 2010 engaged in the anti-U.S. insurgency with assistance from Iran and supported Iran’s theocratic institution velayat-e-faqih (guardianship of jurist), announced his withdrawal from active politics. By launching a frontal attack against Iraq’s corrupt, inefficient political class dominated by formerly exiled Shi’ite figures, Sadr was able to acquire formidable political clout across sectarian lines.

His year-long sit-ins (2015-16) in Baghdad’s Green Zone focussed on popular demands of reform, better public services and an end to corruption. Secular and nationalist in its orientation, the Sadrist led protest movement also drew active participation from communists and civic groups. These groups later became part of the cross-sectarian Sairoon (Marching towards reforms) alliance that went on to win the highest number of seats in May, 2018 parliamentary elections. Last year when talks for government formation lingered on for months after the elections, massive popular protests erupted in the predominantly Shi’ite Basra-Amara-Nasiriyah triangle in southern Iraq. These protests demanding better services and jobs turned into violent anti-government protests. The attacks on political party offices and provincial council buildings exposed the exposed the legitimacy crisis of the Shi’ite Islamist parties which have ruled Iraq for the last sixteen years. The most shouted slogans in these flag-waving protests were ‘No, to political parties’ and ‘corruption is terrorism.’[6]  When the ongoing round of the youth-led protests started in early October, al-Sadr supported protesters demands, calling on Prime Minister Abdu-Mahdi to resign and conduct early elections. Andul-Mahdi had agreed to step-down provided the leading blocs had found ‘an acceptable alternative’ and a new electoral law was passed by the parliament.[7]

Though protesters have welcomed the resignation of the Prime Minister, they have maintained that street protests will continue until there is a complete overhaul of the country’s political system. President Behram Saleh has asked the parliament speaker to name a new prime minister. But finding the replacement for Abdul-Mahdi would not be easy as no single bloc wields majority in the parliament and Abdul-Mahdi himself was a compromise candidate. Leading the way forward from the current political crisis, Ayatollah Sistani has called on the parliament to enact electoral reforms to pave the road for “free and transparent” early elections. It seems that a combination of pressure from the top by Ayatollah Sistani and al-Sadr and popular pressure from below by common Iraqis may well determine the next phase of Iraq’s transition to a functioning democracy.