Austerity measures have broken the back of many parties in fulfilling their poll promises in Greece and the Syriza party did not prove to be an exception.

Greece has seen five elections between 2009 to 2015.In the sixth election held in Greece on July 7 2019, Greece chose to return to power New Democracy- a centre right party, turning away from the leftist Syriza Party that came to power in 2015. Austerity measures have broken the back of many parties in fulfilling their poll promises in Greece and the Syriza party did not prove to be an exception.

In the elections Kyriakos Mitsotakis led New Democracy (ND) won nearly 40 per cent of the votes to reach the majority mark of 158 in the 300 seat Greek Parliament. Despite managing to turn the Greek economy around, the Syriza party lost. The extent to which the ND can offer a new hope to the Greeks and the reasons that led to the loss of Syriza Party are some questions that require a detailed analysis.

Electoral Downfall of the Syriza Party

It was ND that had ruled Greece from 2004-2009 and again from 2012 to 2015- a period synonymous with the peak of the Greek economic crisis. Syriza party led by Alexis Tspiras took over the reins of the government from ND in 2015, which was mired in corruption, nepotism and had brought Greece to the brink of bankruptcy. Under the rule of Syriza, labour market and pension reforms were carried out, unemployment rate fell and a number of construction projects are underway in Greece, for instance the Trans Adriatic Pipeline- a gas pipeline from Central Asia to Western Europe, which also promises to create employment in Greece.1

Greece’s relations with its neighbours had improved under Alexis Tspiras. He deserves credit for settling the long-standing dispute with Macedonia (now North Macedonia). The decision was not very popular in Greece as Macedonia is not only a region in northern Greece, which the Greeks feel affinity for but also the homeland of Alexander the Great. 2 The Prespa Agreement as the deal is called earned Tspiras much international acclaim and even led to him along with his Macedonian counterpart Zoran Zaev being nominated for the Nobel Peace Prize. However, domestically, the agreement threatened the survival of Tspiras’ government and probably added to his unpopularity in the recently concluded elections.

Further, it has been argued that the primary surplus that the country achieved to exit the bailout programme was a result of heavy taxation on the middle class rather than economic growth.3Debt still continues to be very high, hovering around 181 per cent of the Gross Domestic Product (GDP). The Greek economy is beginning to bounce back since it exited the third bailout last year, but the growth is still minimal around 2 per cent. When Alexis Tspiras came to power, he had promised radical changes, which included a referendum on whether Greeks wanted to exit the Eurozone. However, economic constraints soon tied his hands and he accepted the bailout measures for Greece. There has been a dearth of jobs with unemployment rate of 18 per cent.4This caused his supporters to switch allegiance to the ND party.

The Road Ahead for ND

Prime Minister Kyriakos Mitsotakis, a Harvard graduate and son of one of the former Prime Ministers of Greece heads a centre right party, but is more of a centrist than a right winger. His primary responsibility before he takes up the task of propelling the Greek economy out of its sluggish pace of growth is to rein in his own party. It cannot be forgotten that Greece descended into crisis during the rule of ND replete with clientelism and crony capitalism. To maintain the support of hardliners within his own party, he rejected the separation of church and state and is not supportive of Syriza’s stand on LGBT rights. Interestingly on migration as opposed to hard-line views, he supports treating migrants in a more humane manner and one of the priorities of his government is to improve the living condition of refugees.5

As far as economy is concerned, the scale of non-performing assets with the Greek banks is to the tune of 45 per cent. He proposes to implement tax cuts by early next year, digitise Greece’s public sector, and streamline judiciary so that Greece becomes an investment friendly country.6 In his televised address, he said that,

“I am committed to fewer taxes, many investments for good and new jobs, and growth which will bring better salaries and higher pensions in an efficient state."7

The new PM heads the first post-bail-out government and must deliver on his promises of creating jobs and boosting growth. His cabinet has several technocrats.8He has said that the Parliament will not be breaking for summer, so that new bills could be drafted. Moving forward,it is expected that he will introduce business friendly reforms, such as tax reforms, push ahead with privatisation and reform the bureaucracy and also haul up the education sector.9 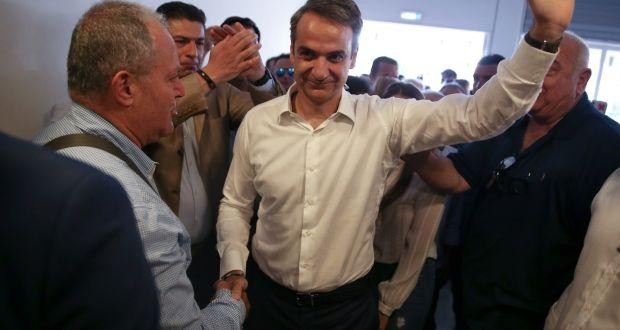 Kyriakos Mitsotakis being greeted by supporters as he arrives at the party’s headquarters in Athens, Greece Photograph: Costas Baltas/Reuters

Internationally, Greece is a strategic partner for the EU in the Mediterranean. Greece’s role in the Balkans is also recognised by the US. A bill known as the Eastern Mediterranean Security and Energy Partnership Act is under consideration of the US that speaks of trilateral partnership of Israel, Greece and Cyrpus through energy and defence cooperation and lifting arms embargo on Cyprus.10 Greece can play the role of arbiter in the Balkans. The solution of the dispute with Macedonia can provide better access to Greek businessmen in the Balkans, but it remains to be seen if the Mitsotakis government will capitalise on the opportunity.11

It can be argued that in the case of Greece, economy continues to be boon/bane of any Prime Minister of Greece. It caused the downfall of ND in 2015 and in 2019, Syriza bore the brunt. However, the crucial difference between the two governments is that Syriza has handed down an economy that is in a better shape from what it had inherited in 2015. Unlike Syriza, ND has a relative free hand in implementing the policies given its seats in the parliament. However, an uphill battle lies ahead for the new Prime Minister. He will have to find the middle path between hardliners in his own party and following a liberal agenda. While on the one hand the fiscal policy of the new government will continue to be monitored by EU so that the budget surplus is maintained, at the same time Mitsotakis must deliver on his promises of ushering in growth.

He will also need to build his relations with the EU and with the neighbours of Greece. A stable neighbourhood augurs well for the growth and prosperity of Greece. He will also need to deftly handle the changing geopolitical environment in the region as China’s influence increases, where Turkey gets increasingly assertive and relations with Russia go through a strenuous phase.

It can be said that for now the people of Greece have reposed his faith in him and the Prime Minister will have to summon all the resources that he can so that Greece turns a new leaf.

9 Greece does not allow for privately owned universities.

11 When in opposition his party had opposed the agreement tooth and nail.