Economy of Resistance and Regional Economic Outreach: How Iran is coping with the US ‘Maximum Pressure’ Campaign

Faced with the US maximum pressure campaign to press Iran to renegotiate the nuclear agreement, Iranian leadership is using the concept of economy of resistance to tell the Iranian people that the country cannot depend on Western powers for its economic goals, while it is also intensifying its outreach to its neighbours to support its plummeting export revenue.

Ever since the US President Donald Trump withdrew from the multilateral nuclear agreement between Iran and P5+1 in May 2018, Iran’s Supreme Leader Ayatollah Khamenei has been telling Iranian people and the government that ‘we should not pin our hopes on the outside world,’[1] resonating the notion of the ‘economy of resistance,’ which he first articulated at the peak of the crippling nuclear sanctions in 2012. However, in a shift from the autarchic underpinnings of the concept of the ‘economy of resistance,’ the Leader has also been advocating that Iran’s advantageous location along the Persian Gulf and the Sea of Oman and the fifteen countries that are its neighbours constitute a ‘very important possibility and capacity for the country.’[2] Tehran hopes that notwithstanding the unilateral sanctions imposed by the US, Iran’s crossroad location between north-south as well as east-west and its hydrocarbon resources will predispose its neighbours to continue to seek mutually beneficial economic relations with Iran. 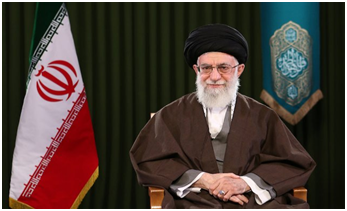 (Ayatollah Khamenei, as the Supreme leader of Iran sets the directions of the national security and foreign policy of the country, Image: http://english.khamenei.ir)

The notion of the economy of resistance was first introduced by Ayatollah Khamenei as a national response to the US and European Union oil embargoes, imposed in 2012 to force Iran to curtail its nuclear program and bring it back to the negotiating table. Against what he called the ‘economic war unleashed against Iran,’ Ayatollah Khamenei envisaged an economy that ‘is not seriously harmed or disrupted by the enemies’ machinations.’[3] Framed within the language of the Islamic revolution, the concept securitised the national economy by projecting the source of economic crisis to a hostile West seeking to undermine the Islamic Republic, in effect shielding the leadership from popular criticism. In economic terms it advocated supporting domestic production, promoting small and medium economic units, knowledge-based economy, management of foreign currency reserves and preventing extravagant consumption at the levels of government and the people.[4]

The rhetoric of the economy of resistance made a comeback when on Persian New Year in 2017, Ayatollah Khamenei took a populist line to increase pressure on President Rouhani ahead of presidential elections, and named the year as the ‘Economy of Resistance: Production and Employment.’[5] The Islamic Revolutionary Guard Corps (IRGC), the elite military force responsible for protecting the Islamic Revolution against internal and external threats and answering directly to the Supreme Leader, is most crucial for implementing the economy of resistance. In the wake of the withdrawal of investments by foreign companies, Khatm al-Anbia, the engineering arm of the IRGC, took the lead in carrying out mega national projects in key sectors such as oil and gas industry, water management, railway and road construction, port and mine development, oil and gas pipelines, and information technology.[6] The Guards also control Iran’s ballistic missile program. The unprecedented designation of the IRGC and its special operations wing Qods Force as a Foreign Terrorist Organisation (FTO) by the US administration in April 2019 is aimed at making it difficult for foreign companies to conduct business with Iranian entities linked to the IRGC.[7]

(Just days after the US designation of the IRGC as FTO, Ayatollah Khamenei appointed Brigadier General Hossein Salami as new Commander-in-Chief of the IRGC, Image: http://www.irna.ir )

As President Trump’s ‘maximum pressure’ campaign intensifies, Tehran has ruled out negotiations and has concentrated on its economic outreach in the neighbourhood. Hosting Iraqi Prime Minister Adel Abdul Mahdi in Tehran in early April, President Rouhani noted that ‘the plans to export electricity and gas and hopefully oil continue and we are ready to expand these contracts not only for the two countries but also for other countries in the region.’[8] Given that Iraq remains heavily dependent on Iranian gas to fuel its power stations, importing roughly 1.5 billion standard cubic feet per day, it has been granted waiver by the US to deal with Iran economically.[9] Iran’s National Iranian Oil Company is set to open an office in Baghdad to ‘facilitate cooperation in oil industry and the transfer of engineering and technical services to Iraq.’[10] The two countries are also conducting studies for joint operations of shared oil fields along their borders. 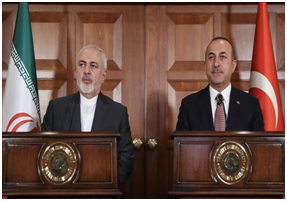 In mid-April 2019, the Iranian Foreign Minister Javad Zarif visited Turkey, where he argued for setting up a financial mechanism similar to INSTEX -- a special-purpose vehicle set up by Germany, France and United Kingdom (EU-3) to facilitate non-dollar trade with Iran.[11] After the US ended waivers on purchase of Iranian oil, Ankara maintained that it was not possible for it to diversify its oil imports quickly as it would have to renew the technology of its refineries before it could buy from third countries.[12] Furthermore, replacing cheaper Iranian oil would put more inflationary pressure on the Turkish economy by raising the cost of petroleum products. Since the threat of the US secondary sanctions makes it difficult for Turkey to import Iranian oil, Turkey is set to increase its gas imports from Iran. Iran already accounts for 20 per cent of natural gas imports to Turkey.[13]

Under the impact of the US sanctions, Iranian oil exports fell by nearly 39% in the first quarter of 2019, however, Iranian gas exports, which remain limited to its neighbouring countries, are currently exempted from the US sanctions.[14] In March 2019, Iran announced its plans to launch four new development phases of South Pars gas field with a capacity to produce 112 million cubic meters per day. During his visit to Tehran in late February, the Armenian Prime Minister Nikol Pashinyan pitched his country as a transit corridor for Iranian gas in the region. President Rouhani expressed Iran’s readiness to step up gas supplies to Armenia and launch tripartite gas cooperation to export gas to Georgia.[15] Similarly, Iran is pushing Pakistan to work on its section of the much delayed Iran-Pakistan gas pipeline. In February, 2019 Iran threatened to file an international arbitration case against Pakistan at The Hague for unilaterally shelving the two-country project, seeking damages worth $1.2 billion. However, following Prime Minister Imran Khan’s visit to Tehran in April last month, the two countries are likely to resume negotiations on the project.[16]

During Foreign Minister Zarif’s visit to New Delhi in early May, 2019, India indicated that the decision on the issue of importing Iranian oil will be postponed till the election process is over and a new government is formed.[17] But the two countries are working towards operationalising the rupee-payment mechanism signed during Zarif’s visit to Delhi in January, 2019. The state-run IDBI Bank, which is in charge of the executing the mechanism, has stepped up its efforts to create Iran trade processing cells in Delhi, Ahmedabad and Kolkata.[18]

Iran’s announcement of suspending some of its commitments under the nuclear agreement is about pressurising the EU-3, who have failed to come up with practical mechanisms to circumvent the US sanctions even after one year of the US withdrawal from the agreement.

However, the fate of the multilateral nuclear agreement will depend not only on whether its remaining signatories are able to come up with effective means to protect Iranian economy from the US sanctions but also the extent to which Iran’s resistance economy and economic outreach to its neighbours will enable it to beat the US gambit to isolate the country economically.

* Dr Deepika Saraswat, Research Fellow, Indian Council of World Affairs, New Delhi.
Disclaimer: The views expressed are that of the Researcher and not of the Council.

[5]Leader names the year ‘year of Economy of Resistance: Production and Employment,’ 20 March, 2017, , accessed 10 May, 2019, http://english.khamenei.ir/news/4727/Leader-names-New-Year-Year-of-Economy-of-Resistance-Production

[7] Statement From the President on Designation of the Islamic Revolutionary Guard Corps as a Foreign Terrorist Organisation, 8 April, 2019, https://www.whitehouse.gov/briefings-statements/statement-president-designation-islamic-revolutionary-guard-corps-foreign-terrorist-organization/

[17] India to decide on Iran oil imports after elections, 14 May, 2019, The Hindu Business Line, accessed 16 May, 2019https://www.thehindubusinessline.com/news/india-to-decide-on-iran-oil-imports-after-elections/article27129684.ece.