The forthcoming parliamentary elections in Maldives are once again presenting a picture of political uncertainty for the country.

The parliamentary elections in Maldives proposed to be held on April 6 2019, are once again presenting a picture of political uncertainty for the country. The relative stability achieved in the past few months due to change of government, may be weakening owing to continuing political manoeuvring of political parties to gain maximum strength in Parliament.

During the presidential elections in September 2018, the united opposition consisting of the Maldives Democratic Party (MDP), the Jumhoori Party (JP), the Adaalat Party (AP )and the fraction of Progressive Party of Maldives (PPM) led by Abdulla Gayoom had put up a united fight against the policies of the Abdulla Yameen government. The MDP leader Mr. Mohammed Solih was supported by the united opposition and won the September 2018 Presidential elections. However, after the presidential elections, political parties are interested in pursuing their own agenda and have so far decided to put up stand alone candidates to contest in 87 constituencies. The differences in opinion among the political parties revolve around constitutional  amendment, handling of corruption charges and local issues, which are driving the agenda of individual parties.

The decision to singularly contest parliamentary elections was first taken by the MDP and followed by other parties. The prominent candidate from the MDP for upcoming parliamentary elections is the former president of Maldives Mohamed Nasheed. The MDP has already launched a nationwide election campaign called the Agenda 19. Some of the important promises made by the MDP are ‘minimum wage, unemployment benefits, personnel tax and transitional justice’.[1] This decision by the MDP may be based on past experience of political crisis, wherein Nasheed had to resign from office of the President in 2012, due to non-cooperation from the parliament, which was dominated by the PPM on implementation of various decisions taken at that time by his office. Therefore, MDP would want to win maximum number of seats in parliament, for smooth implementation of decisions, including a possible change from presidential to parliamentary system as desired by the MDP.

Media reports also suggest that all is not well between the JP and the MDP since the presidential elections. The JP has reportedly accused the MDP of going back on the promise of contesting parliamentary elections by seat sharing. However, President Solih has sought to down play the differences by saying ‘there is no agreement in place signed by all four political parties and it is only a matter of difference of opinion’[2]. Meanwhile, much to the satisfaction of the PPM led by the former President Abdulla Yameen, the Supreme Court (SC) ruled that the extraordinary congress held by the PPM after the presidential elections on September 29, 2018 were legitimate. The congress elected Yameen as the president of the PPM, much to the disappointment of the former ruler Gayoom. To contest in the elections, Gayoom is reportedly planning to launch a new party called Maldives Reform Movement (MRM). Gayoom is in favour of continuation of coalition and has emphasised that leaders of the ruling coalition should prioritise national interests.[3]

The victory of Solih against Yameen, yielded positive results in terms of release of political prisoners, review of past sentences and return of political leaders who were in exile. The100-day agenda of the Solih Government had promised these measures including re-joining the Commonwealth of Nations, establishment of a committee to deal with corruption and asset recovery, commission to investigate murders and enforced disappearances as well as corruption in allocating government housing schemes.

Dealing with issues of corruption was the central promise of the MDP coalition candidate Mr. Solih, and after coming to power, the former President Abdulla Yameen has been cornered by the government over his alleged involvement in ‘money laundering of US$90 million from the state-owned company Maldives Marketing and Public Relations Corporation’.[4]According to reports US $ 1 million was deposited in Yameen’s account at the Maldives Islamic Bank by a local company SOF. After his defeat in the presidential election, Yameen’s bank account having more than US $ 6.5 million was frozen. The criminal court of Maldives has ordered the detention of Mr. Yameen until the end of the trial. In this scenario, the ways in which the PPM led by Yameen would appeal to the voters remains to be seen.

The Anti-Corruption Commission (ACC) report published on February 14, 2019 talks of Villa Group’s involvement in corruption, which is run by the JP leader Quasim Ibrahim.  Though Quasim has denied the charge, the ACC investigation reported that US $ 700,000 was deposited in the bank account of Villa Travels[5]. This could hamper possible ties between the MDP and  JP. The JP leader has been known to switch sides in the past during elections to secure his business interests. Recent media reports also suggest that the PPM may leave some seats vacant for the JP candidates to contest elections. If the JP and the PPM come together, the past political history could repeat in Maldives, which would be a loss to democratic gains of recent months. 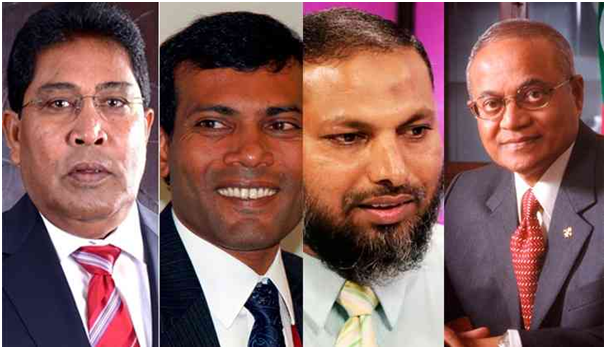 Maldives engagement with India in Post-Election

Amid the internal political developments, the change of government in Maldives presented an opportunity for India to engage with Maldives in a constructive manner towards enhancing development, political, economic and security cooperation. The High-level visits that followed since September 2018 between India and Maldives are a testimony to growing interest in renewed mutual cooperation. During the visit of Maldives President Solih to India in December 2018, India offered a grant assistance of US$ 1.4 billion to Maldives. Both countries signed four MoUs on facilitation of visa arrangements, visa facilitation, cultural cooperation, ecosystem for agribusinesses and Information and Communication Technology and electronics.  The visa facilitation agreement will come into force from 11 March 2019. In a further boost to bilateral cooperation, in its budget aid to Maldives, India’s 2019-20 budget increased from Rs 125 crore in 2018-19 to Rs 575 crore. Increase in aid could cement the relationship and may help address India’s concerns in the security of Indian Ocean given the Chinese inroads into Sri Lanka and Maldives. India is assisting Maldives in setting up Coastal Surveillance Radar System to protect Maldives EEZs from trafficking, piracy and other threats. However, there are sections who continue to raise anti-India slogans and spread false information on India’s takeover of Maldives. For example, former home minister of Maldives, Umar Naseer had remarked that India was trying to finance it politicians and to make Maldives a state of India by 2030’.[6] The MDP leader, Mr. Nasheed has been vocal about improving Maldives relations with India, which suffered during the Abdulla Yameen government. He is also critical about China’s role in Maldives and wants to “buy back the sovereignty from China”.[7]  Maldives external debt stands at US $ 3.4 billion, most of it owed to China.

The post-election developments suggest that the road to democracy in Maldives is fraught with challenges and political parties of Maldives will play an important role in determining the future of democracy. The people of Maldives voted for democracy and transparency but the political manoeuvring and allegations and counter allegations of corruption could result in political instability. The forthcoming parliamentary elections results in Maldives might impinge on future India-Maldives relations, if there is no consensus among political parties in parliament, in implementing the agreements agreed upon between the two countries.

* Dr. Samatha Mallempati, Research Fellow, Indian Council of World Affairs, New Delhi.
Disclaimer: The views expressed are that of the Researcher and not of the Council.

[7]  Haidar Suhasini, “Mohamed Nasheed: In a sense, we now need to buy back our sovereignty from China”, The Hindu,  19 February 2019, https://www.thehindu.com/news/international/mohamed-nasheed-in-a-sense-we-now-need-to-buy-back-our-sovereignty-from-china/article26305618.ece.  Accessed on February 21, 2019.