Vietnam Assumes Chair of ASEAN: The Continuing Impasse on the South China Sea 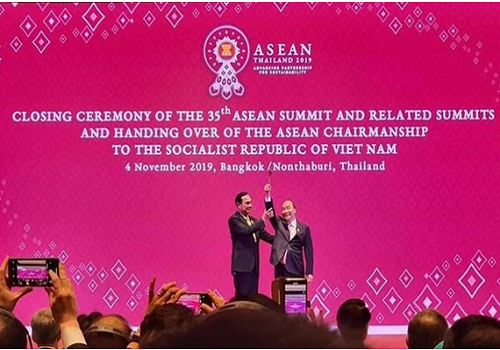 PM Nguyen Xuan Phuc receives the Chairmanship gavel from his Thai counterpart Prayut Chan-o-cha at the closing ceremony of the 35th ASEAN Summit in Bangkok on November 4, 2019

At the conclusion of the 35th ASEAN Summit, Thailand’s Prime Minister Prayut Chan-o-cha handed the Chairmanship of ASEAN to his Vietnamese counterpart Nguyen Xuan Phuc at a ceremony in Bangkok on November 4, 2019.[1]Vietnam has adopted the theme “Cohesive and Responsive” for its Chairmanship. According to the Deputy Foreign Minister Nguyen Quoc Dung – who is also the Secretary-General of the 2020 ASEAN National Committee – the theme “Cohesive and Responsive” urges ASEAN to become more inclusive and pro-active to address the opportunities and challenges of the emerging regional and global landscape. Vietnam would seek to push priorities in the areas of economic integration through hard and digital connectivity and build ASEAN institutional capability and effectiveness through global partnership.[2]On 1 January 2020, Vietnam would also assume the role as a non-permanent member of the United Nations Security Council [UNSC]. This would help Vietnam steer ASEAN’s engagement towards expanding the scope of its global partnership for sustaining peace, cooperation, and development. One of the major issue that would confront Vietnam as Chair of ASEAN is to take forward the dialogue on the South China Sea [SCS].

The situation in the SCS continues to remain tense with China, increasing its assertiveness over the disputed islands and reefs. China has increased its military presence in the region and in particular its naval build-up along with the construction of artificial islands by increasing the area of landfills around the existing islands and reefs. IHS Jane’s Defence Weekly, in 2015 reported that the Chinese infrastructures developed in the disputed sites were explicitly military in nature. Satellite images indicate that these artificial islands have helipads, airstrips, harbours, and facilities to support large number of troops. According to US officials, China seeks to establish an Air Defense Identification Zone [ADIZ] through the new infrastructure that would be used to enhance radar coverage of the area, support a small presence of military personnel, and provide logistic support for ships patrolling the farther reaches of the SCS.[3]

These new developments in the SCS have heightened the level of insecurity within ASEAN, especially amongst those with whom the dispute with China remains unresolved. One of ASEAN’s primary purposes given in its charter is to “maintain and enhance peace, security and stability…in the region”.[4] This implies that issues arising out of the tensions in the SCS are of concern to all of ASEAN and therefore it has an obligation to play a role in the ongoing discussions and help reach a resolution. China has urged ASEAN members to work with it to finalise a draft Code of Conduct [COC] for the SCS and prepare for its adoption in 2021, making 2020 a crucial year for negotiations. Vietnam as Chair of ASEAN would have to take the lead in building consensus amongst the member states in order to have a workable COC by 2021.[5] The COC is an upgraded version of the Declaration on the Conduct of Parties in the SCS (DOC). The COC, once concluded would put in place rules that are binding and help make the situation in the SCS more stable, through mechanism that are effective to manage and control disputes, and facilitate deeper cooperation amongst all. During a press conference after the conclusion of the China-ASEAN Foreign Ministers' Meeting in Bangkok, Thailand, on July 31, 2019, China’s Foreign Minister Wang Yi, expressed confidence on the early conclusion of the COC and expressed satisfaction over the first reading of the single draft negotiating text of the COC that was completed ahead of schedule.[6]

Vietnam is one of the strong voices in the region against China’s unilateral actions in the  SCS. The theme of ‘Cohesive and Responsive’ adopted during its Chairmanship of ASEAN implies there will be pro-activeness in addressing key challenges that threaten peace and  stability in the region. China and Vietnam’s major dispute in the SCS is over the Paracel and the Spratly islands. The contention over the Paracel islands is a bilateral dispute between Vietnam and China, while the dispute over the Spratly includes five other Southeast Asian nations, Taiwan, and China. According to China’s self-declared maritime boundary – the ‘nine-dash line’ – the Paracel and the Spratly islands falls well within China maritime boundary. The dispute over the Paracel islands has in the past witnessed intense military engagement between the naval forces of China and South Vietnam in January 1974.[7] 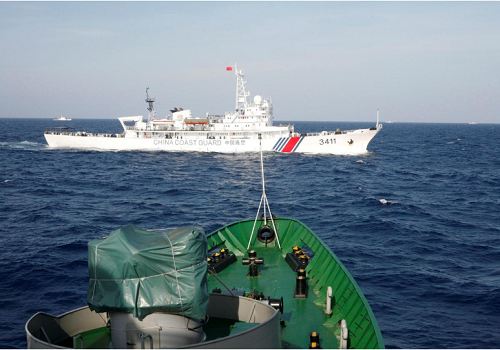 Over the last few years there has been further escalation to the ongoing dispute with both countries contesting each other’s claims of maritime rights over the resources in the SCS. In July 2019, there have been reports which suggested a large-scale stand-off between several coastguard ships of both countries. The incident occurred after a Chinese oil exploration ship entered the contested waters near the Spratly Islands.[9] China’s repeated intrusions into Vietnam’s Exclusive Economic Zone [EEZ] off its central and southern coastlines have become one of the biggest challenges for Vietnam foreign policy in terms of security and defence. As the ASEAN Chair, Vietnam must carry forward the discussions for early conclusion of the COC on the SCS that would help ease the ongoing tension. While the military option has never been ruled out by Vietnam, the resort to the use of force however, would also imply the failure of diplomacy along with further regional instability. The multilateral approach with Vietnam as Chair of ASEAN seems to be a viable option. One of the major challenges for Vietnam would be towards building consensus amongst the other member states. This would be an essential requirement in order to ensure that Vietnam’s diplomatic effort towards breaking the ongoing impasse in the SCS does not become futile.