Giving Peace a Chance? The US and the Taliban sign Agreement to end War in Afghanistan

On 29thFebruary 2020, the United States (US) and the Taliban signed a historic deal towards ending nearly two decades of war in Afghanistan. It is being called the first step towards lasting peace in Afghanistan and can be seen as an outcome of eighteen months of extensive negotiations between Taliban representatives and the US officials. “The agreement for bringing peace to Afghanistan” (Mowafeqatnamah-e awardan-e saleh be Afghanistan)[i] was signed in the Qatari capital of Doha by US envoy Zalmay Khalilzad and Taliban deputy leader Mullah Abdul Ghani Berader in the presence of representatives of several countries including Pakistan, Turkey, Indonesia, Uzbekistan, Tajikistan and India. Interestingly, the Taliban was referred as “the Islamic Emirate of Afghanistan, which is not recognised by the US as a state and is known as the Taliban” in the text signalling the awkward dynamics between the Trump administration and its partner in the agreement.

A successful “week-long reduction of violence”[ii] across Afghanistan paved the way for signing of a preliminary agreement that announced “a timeline for the withdrawal of all foreign forces from Afghanistan” in return for guarantees from the Taliban that it will prevent the Afghan territory from being used as a launchpad for attacks that threaten “security of the US and its allies”. This is supposed to be followed by an important phase of intra-Afghan negotiations that would ideally lead to a political settlement eventually ending decades of war and conflict in Afghanistan.

As the deal was being signed in Doha, in Kabul the US did a balancing act by sending US Defence Secretary Mark Esper and NATO Secretary General Stiltenberg to sign a joint declaration with the Afghan government led by President Ashraf Ghani reiterating the support for the latter. The exercise was also to commit the Afghans to the forthcoming negotiations and to put across the crucial message that “achieving lasting peace in Afghanistan will require patience and compromise among all parties.”[iii]

Key components of the peace accord 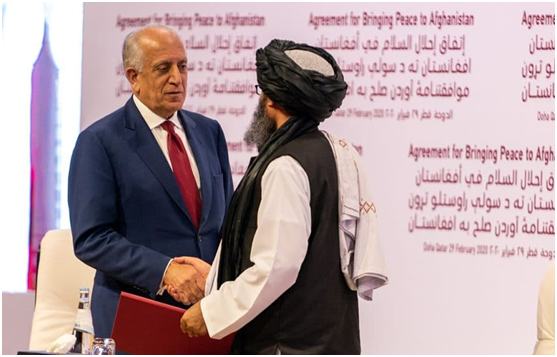 As per the text of the peace accord[iv], the US pledges to withdraw all of its military forces and supporting civilian personnel, as well as those of its allies, within 14 months, following the announcement of the agreement. The reduction of the military footprint will begin with the drawdown of US troop levels to 8,600 in the first 135 days and pulling its forces from five bases. The remaining forces will leave in the next nine and a half months. The agreement further states,  as goodwill gesture the Afghan government will release up to 5000 Taliban prisoners in exchange of 1000 Afghan security forces held by the Taliban by the time first talk between Afghan government and Taliban take place. After the beginning of intra-Afghan negotiations, the US intends to initiate the procedure to “remove members of the Taliban from the sanction list with the aim of achieving the objective by May 29, 2020”.Finally, once the Afghan government begins negotiations with the Taliban, the foremost objective would be to achieve a lasting ceasefire in Afghanistan and also map out a political settlement that can establish the role that the Taliban would play in the future of Afghanistan.

Two of the most curious aspects about the agreement were its silence on the issue of Taliban sanctuaries in Pakistan and the absence of any provision of permanent and comprehensive ceasefire in the country. Ceasefire has only been listed as an agenda item for future negotiations vaguely referred to as “Intra-Afghan negotiations with Afghan sides”. It is interesting to note that the provision of withdrawal in the agreement is not conditional to any commitment on the part of Taliban to protect the democratic process or for that matter any progress being made in intra-Afghan negotiations. It arguably leaves the Taliban with an inducement to use violence as a bargaining chip during their negotiations with the Afghan government. As expected, reports of new wave of attacks in some parts of Afghanistan started emerging just days after the deal was signed heightening tensions about its adverse effect on the launch of intra Afghan talks.

The road to peace

A day after the peace deal was signed the first stumbling block surfaced in the form of a question whether President Ghani’s government should release Taliban prisoners as mentioned in the peace accord. As per the agreement released by the US Department of State[v], up to 5000 Taliban “combat and political prisoners held by the Afghan government will be released by March 10,2020”, which is the tentative date for the beginning of intra-Afghan dialogue. The document further states that “The US commits to completing this goal”. In Kabul, President Ghani emphasised that “there is no commitment to release the Taliban prisoners”[vi]- a position that the Afghan government has repeatedly shared with the US. He further stated that “only the Afghan government has the authority to release Taliban prisoners, not the US.”[vii] However, later he changed his position and indicated that he was not averse to the idea of releasing prisoners in order to move the peace process forward.  Recent reports suggest that a decree has been signed to release 1,500 Taliban prisoners based on “a written guarantee to not return to the battlefield.”[viii] Needless to say, the issue of release of prisoners posed a crucial challenge in taking the initiated process forward, the recent developments suggest that a way out of the stalemate has been achieved.

The second issue pertains to the election crisis that the government in Kabul is currently facing. The much-delayed September 28,2019 presidential election declared President Ghani to be the winner.  Dr. Abdullah Abdullah, Ghani’s key rival in the presidential campaign and Chief Executive of the Unity Government, rejected the results and announced that he would be setting up a separate “inclusive government” and declared his “victory” in the polls.[ix] On 9th March 2020, both the leaders held their own ceremonies and formed parallel governments, with Abdullah refusing to recognise Ghani’s inauguration, as efforts by the US to resolve the crisis failed.[x] This political feud would further raise questions on the legitimacy of the elected government in Kabul, which would invariably be in a back foot during its negotiations with the Taliban.

One can hardly exaggerate the challenges ahead for Afghanistan. Today it encounters contestation of two political ideas and visions – the democratic ‘Islamic Republic of Afghanistan’ that emerged post-2001 with the backing of the international community and the Taliban’s ‘Islamic Emirate of Afghanistan’. The negotiations of these two divergent and contradictory perceptions about the prospective future of Afghanistan are likely to be extremely challenging. Having experienced the Taliban regime, the common people of Afghanistan, especially women have reasons to be sceptical about the intentions of Taliban. A 2019 Survey by the Asia Foundation indicated that an overwhelming 85.1 percent of Afghans had no sympathy for the Taliban.[xi]

In the past few years, various parties have recognised that a military solution to Afghanistan might not be a feasible option and this realisation paved way for more serious efforts to broker a deal with the Taliban. The culmination of these talks is an important milestone in the 18-year long Afghan war which has seen America spend more than $1 trillion on fighting and reconstruction and a death of around 2,400 US soldiers, along with tens of thousands of Afghan troops, civilians and insurgents.[xii] For President Trump, this is a vital development in his election year. There has been a growing resentment in the US about America’s “endless wars” in Afghanistan and Iraq. Moreover, in his previous campaign he had vowed to end ongoing wars and bring back the American soldiers. After this deal, he will be in a position to convince his supporters back home about fulfilling his promise. Speaking at the White House after the signing of the peace deal, President Trump mentioned that the Taliban had been trying to reach to an agreement with the US for a long time and he underlined his optimism by saying “I really believe the Taliban wants to do something to show we’re not all wasting time”.[xiii] In an interview given to Fox News post his telephonic conversation with Taliban deputy leader Mullah Baradar, he referred to Taliban as ‘warriors’ and spoke about the difficult task ahead of the Taliban leadership to persuade the group’s fighters to end violent attacks in the country.[xiv]

India has been watching the developments in Afghanistan very carefully. Its concerns and scepticism regarding Taliban are well-known, yet it has adhered to its consistent policy of supporting all mechanisms that promises to bring peace, security and stability in Afghanistan. India accepted the invitation of the Qatar government to be part of the ceremony in which the US-Taliban Peace deal was signed. The participation of P Kumaran, Indian Ambassador in Doha, in the deal signing occasion has been a significant step considering India’s earlier reluctance for engage with the Taliban in an official capacity. Commenting on the hopes of the peace talks, the External Affairs Minister, S Jaishankar said that it would be important to see if the negotiations that will take place are cohesive or not- “Does Taliban want a democratic set up or does a democratic set up adjust to the Taliban”- remains to be seen. He added “the real negotiations will start now with the intra-Afghan dialogue.”[xv] President Trump’s visit to India did provide an opportunity to discuss each other’s concerns and expectations pertaining to the future of Afghanistan. Overall, India has to be extremely cautious in its response to the rapidly changing ground realities in Afghanistan.  While India will be willing to back any effort that gives peace a chance in Afghanistan, Indian policymakers should consider adhering to Ambassador Rakesh Sood’s advice of “watchful waiting” – a term he borrowed from modern medicine that is usually applied “when there is a complicated case and doctors wait to see how different things are unfolding before deciding on the intervention that is needed.”[xvi]

[i]“Agreement for Bringing Peace to Afghanistan”. US Department of State, February 29,2020. Available at:https://www.state.gov/agreement-for-bringing-peace-to-afghanistan/?fbclid=IwAR07KIQXZ_-hL_34ppgpUGHIOyLgqithW7HXpXvq3DV0gDHZBia7grnB7vk (Accessed on 2.3.2020)

[iv] “Agreement for Bringing Peace to Afghanistan”. US Department of State, Op.cit

[vii] “Ghani’s remarks after the signing of peace deal between U.S. and Taliban”. The Khaama Press, March 1, 2020 Available at :https://www.khaama.com/ghanis-remarks-after-the-signing-of-peace-deal-between-u-s-and-taliban-04464/(Accessed on 2.3.2020)