India’s Outreach to the Island Nations: Summits with CARICOM and the FIPIC

India is looking at the CARICOM and the FIPIC as partners in pursuing mutually beneficial policies to address global climate change, working to address food security needs that arise as a result of climate change, development of eco-sensitive tourism development of renewable energy, sustainable utilisation of ocean resources and development of blue economy and capacity building for disaster management and relief and rescues operations. The long-term goal is to exchange ideas that would facilitate and substantiate the relations of the future.

Just after taking over as the External Affairs Minister, the late Ms. Sushma Swaraj launched the Brihad Sampark Yojana to connect with all UN member countries (192). The initiative was to look beyond the economic ties to strengthen relationships across sectors through engagements with nations irrespective of their geographical size or location. Through this outreach, India aims to build action-oriented and substantive relations that would address issues of mutual interest and concern. In keeping with this aim of India’s foreign policy, Prime Minister Narendra Modi held two meetings with the India-Caribbean (CARICOM) Island Summit and the Forum for India-Pacific Islands Cooperation (FIPIC) on the sidelines of the UN General Assembly (2019). These meetings are a step towards deepening both bi-lateral and multilateral levels through regional and international platforms with the island nations. The CARICOM and FIPIC allow India to strengthen its relations with the region on areas of larger convergences and resolve differences, if any.

India and the CARICOM

The CARICOM1- the Caribbean community of nations that has encouraged common policy and economic goals for the region, helps India reinforce its relations with the countries of the region. The deepened engagement will not only allow India to understand CARICOM’s priorities, concerns, and requirements, it will also help it in its outreach to the larger Latin America region as well.

For the CARICOM, relations with India and other emerging economies and other countries in the “South,” is being viewed as one that ‘could support regional integration and bring sustainable development outcomes to the region in the long term. These relations could be complimentary and serve as alternatives to traditional sources of development cooperation for the Caribbean nations. Development cooperation with emerging economies is of particular interest to the CARICOM as it finds concessional funding from traditional sources shrinking.’2

India has been a development partner for the nations of the region. In his effort to add momentum to the relations Prime Minister Modi laid emphasis on partnering with CARICOM countries in capacity building, development assistance and cooperation in disaster management and resilience. He announced a USD 14 million grant for community development projects in the CARICOM and USD 150 million Line of Credit for solar, renewable energy and climate- change related projects.3 In an effort to further strengthen cooperation Prime Minister Modi extended an invitation to a CARICOM parliamentary delegation to visit India. The need to establish contact beyond just government officials and members of the party in majority, relations with members of the opposition, other prominent political actors and state government officials allows India to enhance its engagements. It provides India with increased areas of cooperation through greater interactions with people, share ideas and explore opportunities to collaborate on projects that may specific to particular region or area. This allows India and the CARICOM members to share ideas beyond national level projects to small scale regional projects that are the need of the people.

Prime Minister Modi in his first meeting with the 14 CARICOM leaders, highlighted the steadily intensifying and deepening relations between India and partner countries of the Caribbean, not only in the bilateral, but also in the regional context. The meeting deliberated on means to strengthen the existing political and institutional dialogue processes, boost economic cooperation, increase trade and investment opportunities and foster robust people- to-people relations. 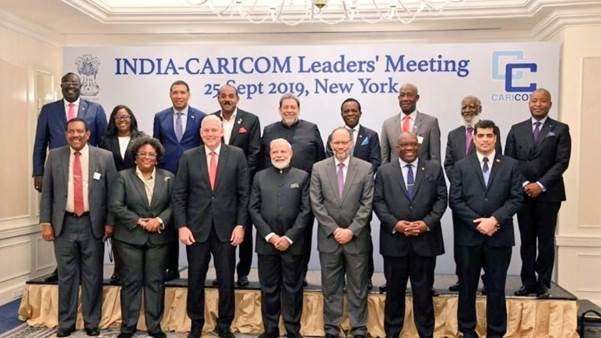 Prime Minister Modi and the leaders of the CARICOM (2019, New York)

One such area of economic cooperation is the blue economy. Ocean based economies are an important component of their respective economies and, both, India and the CARICOM, are looking at developing the blue economy under the UN Sustainable Development Goals. CARICOM is also putting forward a case for strengthening cooperation between small island states in the Caribbean and India in the health sector and other areas that are critical to their development. The scope for partnership is to not just in traditional curative medicines and treatments, but also in complementary alternative medicines, which make up a booming sector of India’s economy. The CARICOM is keen to from India’s venture into wellness and medical tourism.

India has a sizable diaspora in the region that can help open new doors for mutually invigorating partnership. It has a vibrant community of PIOs, people of Indian Origin, which occupies a considerable position of power and influence in the island nations. The disapora is educated and assimilated with the host nations and ready to look for solutions to common challenges. NRI entrepreneurs are also making their presence felt in the various Special Economic Zones of the nations. Their success in the fields of business, politics, culture and education while retaining their links to India and the Indian diaspora across the world allows them to play a contributing role to the regions development by leveraging such linkages.

India and the CARICOM are also engaged with each other through the BRICS, where the CARICOM is exploring investment and trade opportunities to further its diversification of its economic relations. Of mutual interest to the BRICS and CARICOM is the need to reform the global economic and political order to take into account their specific needs. For India, relations with the CARICOM at a multilateral platform and bilateral relations with the countries of the region allow for opportunities for achieving their development goals and objectives. CARICOM and India can explore the possibility of exploring each other to deepen their relations in their respective regions. CARICOM has extensive outreach with Latin America, a region that India is focusing on and India provides the CARICOM nations the space to engage with other nations of South Asia.

India and the FIPIC

As India looks at the development of a free, open and inclusive Indo-Pacific, it is looking at the island nations of the Pacific region to assist in operationalising the concept that would further strengthen relations through the Act East Policy. The India-ASEAN relations have allowed India to play a role and protect its strategic and commercial interests in the Indian Ocean. The FIPIC4 marks its serious efforts to look beyond and engage with the Pacific region.

India’s relationship with the Pacific Island nations has deepened with the establishment of the FIPIC. [The first and second meetings of the FIPIC took place in Fiji (2015) and Jaipur (2016)].The recent meeting between Prime Minister Modi and the leaders of the India-Pacific Islands Developing States (PSIDS) at New York (2019) was with a view to build close partnership with the Pacific Island nations and work closely to advance mutually beneficial developmental goals. In keeping with India’s focus on providing developmental assistance based on the requirements as stated by the receiving country, Prime Minister Modi announced the allocation of USD 12 million grant (USD 1 million to each PSIDS) towards the implementation of high impact developmental projects in areas of their choice. In addition, a concessional Line of Credit of USD 150 million, which can be availed by the PSIDS for undertaking solar, renewable energy and climate related projects based on each country’s requirement was also announced.Prime Minister Modi extended an invitation to all the leaders for the 3rd FIPIC Summit to be held in Port Moresby in first half of 2020 to continue the high-level engagement and keep the momentum going.5 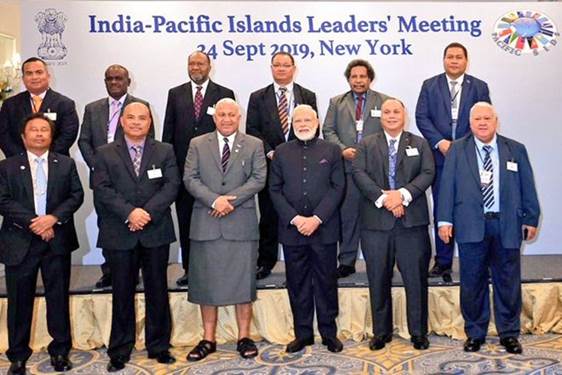 Prime Minister Modi and the leaders of the FIPIC (2019, New York)

India’s outreach to the Pacific Island nations is being shaped by various factors. India wants greater cooperation with the island nations in sectors like oil and natural gas, mining, IT, healthcare, fishing and marine research among other areas. The Pacific islands are home to the Indian diaspora. The geographical location, at the centre of important sea routes of trade, makes it crucial for India to deepen its engagement here. The role of other regional powers such as China, Japan and the United States has raised the strategic and economic significance of the region

India and the nations of the region share similar concerns on the issue of climate change. The recent report by the United Nations’ Intergovernmental Panel on Climate Change (IPCC) has stated that if climate change is not arrested, the rise in sea levels would devastate coastal cities, small island nations, Arctic communities and marine ecology and habitat. For India, the report warns of the devastation of two its mega-cities-Mumbai and Kolkata, while the threat to the island nations of the Pacific are more pronounced. This is an agenda point that India shares with the CARICOM nations as well.

India’s engagement with the FIPIC includes joint projects in research and development of clean energy, setting up marine biology research centres, building capacity, collaboration on space technology for building a land and water resources inventory. Besides these areas, the island nations and India are working together in the field of affordable healthcare and education.

India’s efforts to advance its engagement is with an aim to collaborate with FIPIC nations to help it increase its maritime domain awareness, share information on commercial movement along these lanes and strengthen security linkages across navies and coast guards. It also wants to collaborate with FIPIC nations on capacity building, in both the civil and defence sectors and engage in maritime infrastructure development projects that would further enhance trade. This holistic view is an extension of the concept of ‘SAGAR’ (Security and Growth for All in the Region) as forwarded by Prime Minister Modi. The initiative is aimed at enhancing a range of capacities, engaging with other countries, and fostering greater cooperation in the littoral. To ensure that the region gets due attention, in April 2019, India set up an Indo-Pacific wing in the Ministry of External Affairs.

India is looking at the CARICOM and the FIPIC as partners in pursuing mutually beneficial policies to address global climate change, working to address food security needs that arise as a result of climate change, development of eco-sensitive tourism development of renewable energy, sustainable utilisation of ocean resources and development of blue economy and capacity building for disaster management and relief and rescues operations. The long-term goal is to exchange ideas that would facilitate and substantiate the relations of the future. This could be achieved through various means such as by addressing the needs of the younger generation through collaboration in the education sector especially in the information, science and technology sector, healthcare and as well as building ecosystems to encourage the development of start-ups and build an entrepreneurial culture. As they battle issues of mutual concern, India and the CARICOM and FIPIC takes into account their unique experiences and expertise to contribute to the formulation of international policies on issues such as climate change, sustainable development etc.

While the island nations of, both, the Caribbean and the Pacific region are small, they have considerable economic, political and strategic significance for India. The economies of these nations are improving and they look towards a demographic change, providing India with new economic opportunities. Strengthening the engagements with the island nations would open new opportunities for exchange of ideas, knowledge and information for cooperation and to address challenges.

3Ministry of External Affairs, Government of India, “Prime Minister met with the leaders of CARICOM at the UNGA,”https://mea.gov.in/press-releases.htm?dtl/31862/Prime_Minister_met_with_the_leaders_of_CARICOM_at_the_UNGA, Accessed on 10 October 2019