Libya descends into an abyss

Fresh round of fighting in Libya seems to have diminished all hopes for an early political solution in Libya. Colonel Hifter’s new offensive in Tripoli against UN-recognized government of Serraj might lead to another wave of violence in war-torn Libya.

When things seemed to be moving towards a political consensus in war-torn Libya, the country once again has been dragged back into a civil war. It all began in the first week of April, 2019 when the self-styled leader of Libyan National Army (LNA) and chief of the Operation Dignity (began in 2014) Colonel Khalifa Hifter ordered his forces to launch an offensive against Tripoli. This happened when the UN Secretary General, Antonio Guterres was in town to hold a preliminary talk for a UN-brokered national conference scheduled on April 14-16, 2019 to chart out the mechanism and a time frame for the election. The timing of the offensive challenges the UN’s position to broker and stabilize peace in the strife-ridden country.

This sudden offensive against Tripoli came as a surprise because Prime Minister Serraj of the UN-recognized Government of National Accord (GNA) had met Colonel Hifter in UAE in February only and both had agreed to hold an early election as a necessary step to steer the nation away from the ongoing quagmires. Meanwhile the UN envoy for Libya, Ghassan Salame announced the postponement of the UN-backed conference in the backdrop of violence in Tripoli. Given the worsening security and uncertainty, India announced the evacuation of its entire contingent of peacekeeping force comprising 15 Central Resaved Police Forces (CRPF) personnel after situation suddenly worsened.1 The US has also withdrawn some of its security forces due to poor security. The Indian Mission in Tunis is closely monitoring the situation in Tripoli following fresh wave of fighting and has provided phone numbers of mission officials to Indians currently living in Tripoli in case of any distress or seeking any assistance. 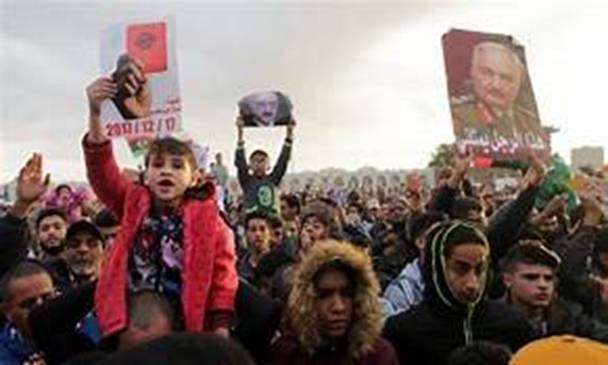 On April 4 2019, LNA air forces belonging to Colonel Hifter and its affiliated local militias started air airstrikes against southern Tripoli and captured national airports in the town. The only operational air service at the international Mitiga airport has been suspended due to constant air raids and artillery shelling that have damaged the major part of the airport. It was reported that in the fighting between LNA and Serraj-supported militia and his army, more than two hundred including civilians have been killed while many others were injured. The local militias sympathetic to LNA are reported to have taken over southern part of Tripoli completely.  It must be noted that they are already in control of southern and eastern part of the country including some major oil ports.

The UN mission in Libya had sought a two-hour ceasefire to facilitate the exit of trapped civilians to nearby safer places. Reports suggest that around 2,2 00 civilians in Tripoli have fled the town already for safer places. Meanwhile, neighbouring Algeria has deployed additional forces to deter its impact and stop the entry of illegal immigration into their country. Libya shares a six thousand kilometres border with Algeria, which itself is in deep political turmoil. Around five hundred Tunisians have already left Tripoli on the advisory issued by Tunisia to avoid the war zone in Libya.2It is also reported that many are crossing border into Tunisia to receive treatment after injuries and hospital sources in Tunis sayl that they have received injured persons from both warring groups.

Prime Minister Sarraj on his part accused Hifter of betraying him3. Forces of Sarraj along with local militias have claimed to counter the offensive of Hifter and slow LNA’s advances. The spokesperson of Sarraj-led forces termed the counteroffensive against Hifter’s forces as ‘Volcano of Anger’ to purge Tripoli of all the aggressors and illegitimate forces4 hinting at the Hifter-led forces. Mr. Khalid Al-Mishri, the head of Supreme Council of State, an advisory body of the GNA has called the government to issue an arrest warrant against Colonel Hifter who has marched into the capital to subvert the peace process and destroy the nation.5 Hifter, on the other hand, has claimed that he is targeting the radical Islamist forces affiliated with the regime of Sarraj. He is also expecting local Tripoli militia affiliated with the regime of Sarraj to desert him and join his forces.

The UN Secretary General, Antonio Guterres and the US Secretary of States Mike Pompeo have called all sides to halt the war and not subvert the ongoing efforts to achieve peace in Libya. The EU foreign minister has echoed the same sentiment and has asked all warring sides to stop fighting and come on the negotiating tables.6

Role of external powers: An obstacle to peace

Libya, like Syria, Iraq and Yemen has not been able to guard against the political influence and strategic ambitions of regional and global powers following the Arab uprising. The latest fighting in Tripoli between LNA and forces loyal to Sarraj should not be seen merely as a war between two factions but its genealogy goes beyond the Libyan territories. The fresh assault against Tripoli could also be seen through the prism of ideological and political entrenchment of countries like UAE, Egypt, Saudi Arabia, Qatar, and Turkey in the internal politics of Libya in addition to economic interests of France, UK and Italy. Since the ascendency of Hifter in Libya in 2014, UAE, Saudi Arabia and Egypt have been extending all military and financial support to his anti-Islamist operation because they see him as a strong military actor against the ascendency of radical and terrorist forces. These regimes are fighting their own anti-Islamist battle in their respective countries. It is not a coincidence that Hifter has launched this radical offensive only after his meeting with King Suleiman of Saudi Arabia in Riyadh in March, 2019 and earlier he had visited Egypt and Russia as well. 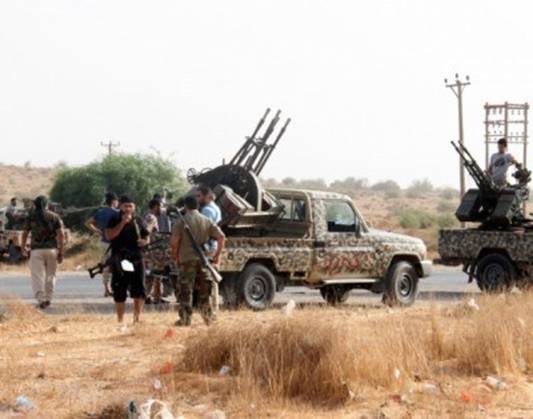 On the other hand, Turkey and Qatar are opposed to Hifter because they represent a block sympathetic to the radical Islamist forces. Qatar has offered shelter to many prominent members of Egyptian Muslim Brotherhood (MBH who have been castigated under the new Egyptian law. It is not only about the military support but regional media also seem to be involved in this battle and Aljazeera is fully supportive of Prime Minister Sarraj while Hifter is reportedly seeking the help of Sudanese opposition leaders in his anti-Sarraj offensive.

It is worth mentioning here that Hifter, in a Sicily conference in Italy on Libya in November 2018, refused to participate until Turkey and Qatar withdrew from the meeting. Colonel Hifter is reported to have enjoyed the support of French government that has provided clandestine advisers. The French covert intervention seems to have undermined the efforts to achieve peace process in Libya.7 Prime Minister Sarraj is said to have called the French President, Macaron immediately after entry of Hifter’s forces in Tripoli and asked him to advise Hifter against this move.8 France has never hidden its closeness to Hifter and considers him a close partner in fighting terrorism and illegal migration but it also said that there is no such secret plan to install Hifter and the French has called all parties in Libya to be the part of negotiation.9 It is worth recalling here French forces were found fighting along with Hifter’s forces in July 2016 when it had lost three armed personals.

Italy has criticised France for its embrace of Hifter and the current President of the EU, Mr. Tajani, who also heads a political party in Italy, has accused France of being the reason behind the current turmoil in Libya and alleged that some countries are fomenting the crisis in Libya to serve their economic interests.10 Russia has threatened to veto a UK-proposed resolution in United Nations Security Council (UNSC) calling Hifter to stop war against the legitimate government and demanded that   the resolution must include a call to all sides to stop war. 11 As far as US is concerned, it has avoided taking sides openly like France or Egypt.

However US has some strategic inclination towards Hifter because he has allowed a US military base in the town of Benghazi and further its close allies UAE and Saudi Arabia are in full support of Hifter.

The current turmoil in Libya seems to signify that peace in the country has become a mirage. Any solution is a distant reality due to lack of coordination, involvement of economic interest of multitude stakeholders and absence of consensus on the objectives among the mediators. By launching this offensive, Colonel Hifter has made his disdain for peace quite clear. Interestingly, he had declared that Libya is not ready for democracy.12 This disorder could strengthen the radical Islamist forces who had in recent months lost ground but the new power vacuum could offer them a new lease of life. There are reports that IS members have killed three civilians since the city descended into chaos.

What further makes peace difficult in Libya is the huge natural wealth in Libya and the temptation this has for Europe and other powers. Libya has the highest oil wealth in Africa and it exports 300,000 barrel of oil every day to Europe. Libya has huge gas reserves worth 177 million cubic meters and has fifth highest reserves of shale gas after US, Russia, Argentina and China.13 After the Venezuelan crisis, the Libyan turmoil might cause shock in the oil market as Hifter already controls the oil crescent in of Gulf of Sirte region in the east, which has four major oil ports and constitutes a lion share of national oil reserves. Libya was exempted from OPEC oil production cut in a recent meeting and in November 2018, it produced 1.28 million barrel per day (highest in last five years) but the recent crisis would have its deep impact on global market.

The people of Libya are politically divided among supporters of Hifter, GNA and the Islamist forces. Those who control Tripoli would produce the real winner but who can bring peace is not so clear. Colonel Hifter might be looking for alliances to form a strong block to unseat Prime Minister Sarraj and there are some reports that he is in touch with the son of Colonel Gaddafi and other chiefs of pro-Gaddafi tribes14  and they might align to form the government whenever the political process begins.

With the withdrawal of some US and UN peacekeeping forces due to the worsening situation, it remains to be seen whether other foreign stakeholders will follow suit and whether Libya will ever be left to the Libyans to resolve their issues and form a sustainable model of governance. The situation in Libya may also take such a turn that all external powers may have to openly take sides among warring Libyan factions.

10EU President accuses Franc of being behind the Tripoli war The Libya Observer, A Libyan English Daily, Accessed https://www.libyaobserver.ly/news/eu-president-accuses-france-being-behind-libya%E2%80%99s-tripoli-war April 8, 2019