Nigeria went for polls: Challenges ahead of Buhari

The re-election  of incumbent President Buhari and his party All Progressive Congress coming to power with a strong majority is an indication that Nigerians have faith in him to revive the deteriorating economy and tackling the threats from Boko Haram.

The result of a- week-delayed Nigeria’s Presidential elections was declared on 27 February, and this indicated a victory for democratic consolidation in one of Africa’s most populous and important countries. The incumbent President Muhammadu Buhari from the All Progressive Congress won for a second and final term receiving 15,191,847 votes. His immediate contender Atiku Abubakar, candidate of the People’s Democratic Party (PDP) received 11,262,978 votes. A tight presidential competition between President Muhammadu Buhari and former Vice President Atiku Abubakar was predicted by scholars; yet, Buhari defeated Abubakar by a wide margin in the election, with 56 percent of the vote. 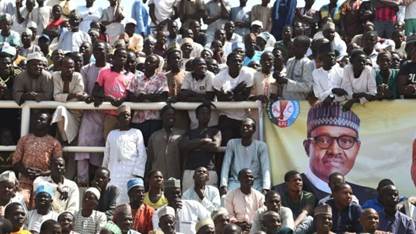 Nigeria was supposed to hold general elections for the President and National Assembly on 16 February. But this came to a halt when Nigeria’s Independent National Election Commission (NIEC) announced a week’s postponement on account of logistical challenges, just a few hours before the polls. The NIEC had difficulty in arranging the general election that witnessed participation of 23,300 candidates from 100 parties and eighty-four million registered for 120,000 polling stations.

The postponement of elections disrupted the momentum as millions of Nigerians had travelled to their hometowns to cast their votes and it impacted the voter turnout on the day of election. The overall turnout of voters across the country was 35.6 percent of registered voters, which was less than the turnout in 2015 which was 43.6 percent. Cases of violence in some states during the elections also hindered voters from casting their votes. Violence during election used to be a common feature in most African countries including Nigeria. However in recent times, a number of factors including support from the United Nations, European Union has contributed to more peaceful democratic progression in Mali, Senegal, neighbours of Nigeria. Despite this, during this election, the Situation Room- an amalgam of 70 civil society groups in Nigeria reported the deaths of at least 39 people across many states.  In fact, according to Clement Nwankwo, convener of the Situation Room, around 260 people were killed since the beginning of the election campaign in October 20181. Besides, there were various reports of election manipulation such as vote-buying, multiple stoppage of card readers to recognise voters and numerous attacks at polling stations, stuffing of ballot boxes, intimidation of voters, mishandling of administration in the election and insufficient voting materials.2 The opposition leader Atiku Abubakar and his People’s Democratic Party (PDP) have rejected  the poll outcome, calling it a ‘sham’ and promised to appeal to the highest court to challenge the election outcome.3However, it is unlikely to overturn the official result as the Chairman of INEC Professor Mahmood Yakubu has conferred President-elect Muhammadu Buhari the Certificate of Return on 27 February. In the past such efforts to contest poll outcomes have failed.

What led to Buhari’s win?

In Nigeria and Africa and also in general in the developing world, the personalities of leaders and their background often takes centre stage and ideology or policy of the party taking a back seat. As far as the presidential candidates were concerned, many observers believe that Buhari’s honest and soft spoken demeanour stood out vis-à-vis that of Atiku Abubakar who had several allegations of self aggrandisement from public treasury during his tenure as Vice President. Mr. Buhari is also considered as a strongman to fight the Boko Haram, the Islamist militant group. 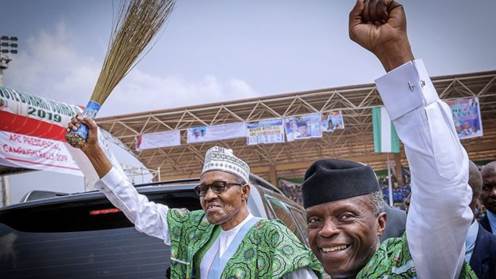 Issues and challenges ahead of Buhari

As Buhari wins a second and final term, challenges ahead of him remain enormous and include tackling corruption, insecurity and delivering on economic development.

As soon as his victory was announced, President Buhari vowed to restructure the Nigerian economy. In recent time, there were some improvements in the Nigerian economy and in the year 2018, the country’s GDP increased by 1.93 per cent as against the 0.82 per cent achieved in 2017. Buhari has attempted to diversify Nigerian economy by focussing on telecommunications; financial services sector and cement industry.4The telecommunications sector alone has created over one million direct and indirect jobs and helped attract investment over USD twenty-five billion.5This in turn boosted the growth of mobile telephony, developing other sectors such as e-commerce and entertainment. Nevertheless, Nigeria continues to face daunting tasks. Many onlookers criticised escalating corruption cases in the oil sector as the reason behind Nigeria’s underdevelopment, given the fact that the Nigerian economy is heavily dependent on the oil and gas sector, with around 80 percent of government revenues coming from it. Nigerian National Petroleum Corporation (NNPC) - a state owned institution has faced corruption allegations for misappropriating public funds to support the Nigerian government.6

The Buhari administration launched various anti-corruption measures such as the Treasury Single Account, the whistle blowing policy and establishment of Presidential Advisory Committee against corruption7. According to various analysts, not been much progress have not been made in taking action against those suspected of corruption.8 In some cases, President Buhari has accused the judiciary for not cooperating the government campaign against corruption as reported by the media. But this allegation has been refuted by many scholars who have noted that the trial and investigation process are often inadequate and, and in several cases political interference has led to pressures on the judiciary. Thus, Buhari’s administration’s challenge remains to design more effective institutional mechanisms to deal with the problem of rampant corruption.

Nigeria has witnessed unprecedented levels of ethnic violence, which are mostly intertwined with religion. Violence along these lines has significantly disturbed Nigeria’s social and political life. Conflicts between the Muslim Hausa Fulani majority group in the northern region and Christian minority ethnic groups in the south have been  a common occurrence that has led to unacceptable levels of destruction of lives and property and high levels of physical displacement of people every year.9The migration of Fulani herders from the northern belt on account of water scarcity and rising attacks of Boko Haram in central Nigeria, inhabited by Christians has been accompanied by prolonged ethno-religious conflicts. Many scholars have said that the incumbent President Buhari has paid not much attention to the Fulani crisis despite his assurance of security to be the top priority of the government.10 Therefore, the real challenge before the re-elected Buhari administration is to ensure the inclusion of all ethnic communities for effective management of water resources and grazing land.

Apart from religious and ethnic conflicts, issues concerning the Niger Delta region have greatly undermined the security of Nigeria and attracted international concern over the years. Prolonged neglect from state authorities has led to continual conflicts between local communities and oil companies who are operating in partnership with the Nigerian state. Often foreign oil workers have been targets of local armed groups such as the Movement for the Emancipation of Niger Delta (MEND) whose major demand has been more autonomy in the region. Oil installations have been sabotaged by them.11As a result, the oil and gas companies have become increasingly reluctant to fix oil pipelines and the ineffectiveness of the Nigerian security forces to prevent such attacks remains a challenge for President Buhari.

Nigeria has also been plagued by constant terrorist attacks from Boko Haram- the Islamist militant group and its affiliate ISWAP that has affiliation with the Islamic State. When President Buhari first came to power in 2015, he promised to revamp the security structure of the country and launched a counter-terrorism offensive in conjunction with Nigerian Air Force and Nigerian Army in the north-eastern region, known to be a sanctuary for these groups. Despite such efforts by Buhari, the rising attacks by ISWAP on military bases since July 2018 raised serious questions over the effectiveness of counter-terrorism offensive. The new Buhari administration cannot afford to disregard this menace which poses challenge to the peace and stability of the country. 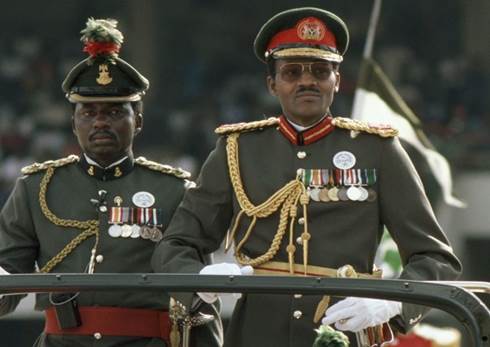 Nigeria’s election outcome assumes significance for the India-Nigeria partnership that have  acquired a greater thrust when President Buhari visited India to participate in India-Africa Forum Summit (IAFS-III) held in New Delhi in 2015. Both countries have attempted to upgrade their partnership in areas of human capacity development, e-governance, industrialisation, Information and Communication Technology apart from oil.

Oil is the most crucial factor of India-Nigeria partnership as India imports 12 percent of its crude oil requirement from Nigeria. Apart from oil, India is an emerging development partner of Nigeria with India having contributed US$ 100 million Line of Credit (LoC) to Nigeria. In January 2019, India and Nigeria signed a Bilateral Air Service Agreement to expand air connectivity between both countries.

Both India and Nigeria share the view that countries need to come together to combat the scourge of terrorism.

The re-election of incumbent President Buhari and his party All Progressive Congress coming to power with a strong majority is an indication that Nigerians have faith in him to revive the deteriorating economy and tackling the threats from Boko Haram. However, the election unlike the previous one held in 2015, which witnessed a peaceful transition of power, has seen contestation by the opposition leader Atiku Abubakar of People’s Democratic Party (PDP) who has rejected the poll outcome, citing cases of irregularities. The election also witnessed a lower voter turnout as compared to 2015. At present, the real task before President Buhari is to fulfil his commitment of tackling security challenges and corruption and strengthening the economy which are similar to the issues and challenges of India as it gears towards the Lok Sabha election from 11 April onwards.

1010 “Why Buhari will not act on Fulani herdmen killing”, The Punch, 9 January 2018, Accessed 1 February 2019, URL: https://punchng.com/why-buhari-will-not-act-on-fulani-herdsmen-killings/