Thailand’s upcoming elections are to be welcomed, but it remains to be seen how much space the new Government would have.

Thailand is gearing up for its first election in almost five years, to be held on March 24, 2019. This paper gives a brief account on the series of events in the lead up to the announcement by the Thai Election Commission on January 23, 2019. The adoption of Thailand’s new Constitution in 2017, which mandated necessary institutional reforms before the polls could be conducted, would be highlighted in the paper. The process of implementing these institutional reforms caused the elections to be postponed several times and was marked by pro-democracy demonstrations demanding that the military government lift the ban on political activities and commence the election process as promised. The first parliamentary elections since the country came under the military rule in May 2014 are important for Thailand.

Thailand’s Parliament under the New Constitution 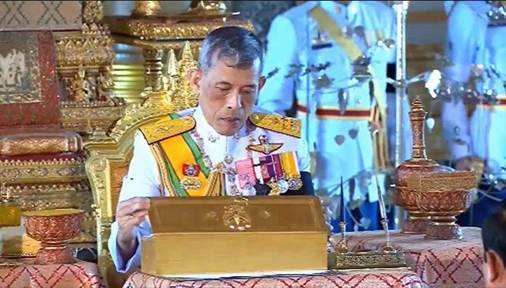 The new Charter signed by King Vajirilongkorn in April 2017 is the 20th Constitution for Thailand since its transition from an absolute monarchy to a constitutional democracy in 1932. The new Constitution paved the way for the conduct of the Parliamentary elections while also introducing reforms in the election process. The Thai Parliament comprises of the House of Representatives and the Senate having 500 and 250 members, respectively. The members of the House are elected for a period of four years, while the Senators are elected for a five-year term. The members of the House are elected through a first-past-the-post system and through proportional representation. The new Constitution stipulates that out of the 500 members, 350 would be elected under a first-past-the-post system and the remaining 150 would be chosen according to proportional representation. This is a departure from the previous composition of 375 elected under the first-past-the-post system and the remaining 125 being chosen according to proportional representation. The type of proportional representation has also changed. In the 2011 election, each voter cast two ballots – one for a candidate from their constituency, and the other for one of the parties. In the upcoming election, a system called mixed-member proportional representation has been implemented under which voters will cast only one ballot. Their vote would be counted twice – once for the candidate, and once for the candidate’s party.1

Unlike the members of the House of Representatives, Senate members are not directly elected by the public. Under the new Constitution, out of the 250 seats  members,  194  Senators would be selected by the current ruling military government also known as the National Council for Peace and Order (NCPO)2, six seats are reserved for the leaders from the armed forces, the Supreme Commander, the defence Permanent Secretary and the national police chief. The remaining 50 Senators are elected by special panels and consisting of 10 professional and social groups - including bureaucrats, teachers, judges, farmers and private companies – after being approved by the Election Commission through a detailed background check on each of them. The 2017 Constitution also stipulated that the new Senate would convene along with the newly elected House of Representatives. Further, in choosing the next Prime Minister of Thailand, all the 500 members of the House as well as the 250 non-elected Senators would join the vote. Therefore, the candidate who receives a combined majority in both houses of the Parliament would be elected as the Prime Minister who would then form the new Government.3

Events Leading to the Final Announcement 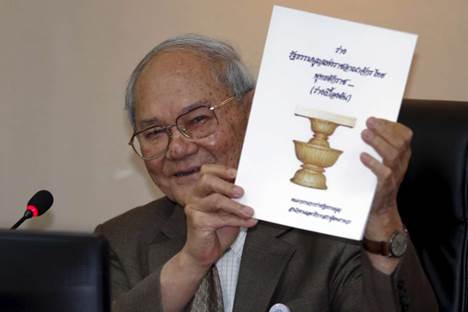 The Preamble of the new Constitution says that Thailand has always maintained the intention to adhere to a democratic regime of Government with the King as Head of State. In line with the Constitution, the Prime Minister of Thailand Prayut Chan-o-cha on September 12, 2017 stated that the elections would take place between mid-October and December 2018. There were four organic bills which needed to get cleared by the National Legislative Assembly (NLA) and receive the royal endorsement in order for the elections to take place. According to Section 268 of the new Constitution general election should be held within 150 days after these four bills took effect. These four organic bills related to the Election Commission, political parties, elections of the Members of Parliament, and the acquisition of Senators for the Upper house or the Senate.4

PM Prayut Chan-o-cha speaking after a joint meeting of the Cabinet and the NCPO on October 10, 2017, stated that he would announce the exact date for the election in June 2018 with the target being November 2018. Further he also stated that the regime would consider easing political restrictions so that parties can resume their political activities in compliance with the new law.5 Since the 2014 military coup, there was a ban on the political parties as well as on gatherings of more than five persons. The military Government had cited this requirement for ensuring peace and order after months of street protests against the civilian Government of Prime Minister Yingluck Shinawatra. NLA Vice-Chairman Surachai Liangboon Lertchai assured that by June 2018, the law-making assembly would finish the scrutiny of the four bills that were the pre-requisites for the conduct of the elections. Meanwhile Thailand’s major political party, Pheu Thai Party member Samart Kaewmeechai welcomed the announcement while demanding the lifting of the political ban that had been imposed on them.6 Thailand’s Prime Minister in December 2017 assured that he would use special order under Article 44 to resolve the issue on the ban imposed on political parties. This special order would give the military sweeping powers to allow political parties to prepare for the general election. Positive developments like these were welcomed by the international community, specially the European Union which began to resume its political contact at all levels with Thailand after putting their relations on hold.7

However, in February 2018, Pronpetch Wichitcholchai, President of the NLA hinted that the organic bills relating to the election of MPs and selection of Senators could be scrapped, which in turn could delay the general election beyond February 2019. According to the NLA President, these two bills had already been sent to the Constitution Drafting Committee (CDC) and Election Commission (EC) for a detailed study and after their respective examination of the bills, the two institutions would decide whether there were other issues that needed further scrutiny. Further, if the lawmakers submitted the two organic bills to the Constitutional Court for an opinion, on whether it complied with the new Constitution, then it could possibly cause the elections to be pushed till February 2019 and even beyond.8 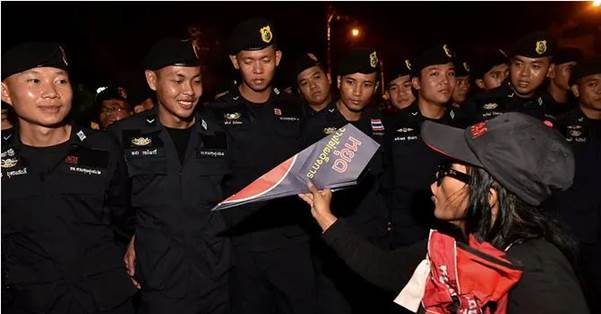 A Pro-Democracy protester near the army headquarters in Bangkok, on Mar 24, 2018

This constant failure to stick to the time table for the conduct of the elections and the government’s inaction towards easing the restrictions on political activities that included public gatherings without permission or discuss policy in public, added to the build up of political unrest. On March 24, 2018, over 300 Thai pro-democracy demonstrators marched to the gates of the army headquarters in Bangkok. The protestors called upon the soldiers to withdraw their support from the ruling military government. It was one of the biggest waves of protests against corruption and the government's failure to stick to its election timetable.9 In the meantime, the Thai political parties called on the government, to lift the restrictions on campaigning and continued to deepen their demands for the conduct of elections. Critics of the military government, including Thai opposition parties demonstrated against the government for deliberately delaying the vote and also accused it of attempting to consolidate its power base to ensure its influence over politics remained intact even after the elections.10 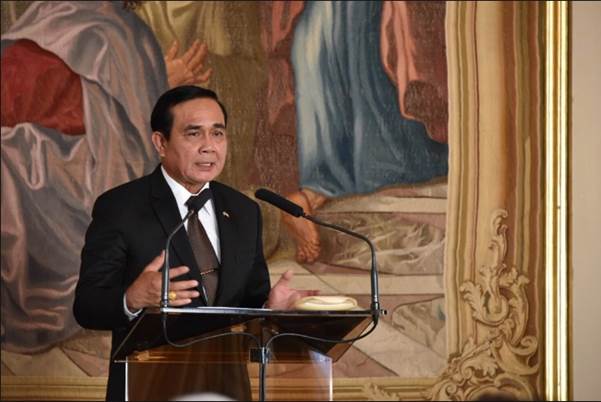 PM Chan-o-cha while speaking in a seminar on “Transforming Thailand: Thailand-France Partnership”, in France on June 25, 2018, promised the gathering that included leaders and business elite, that the military government, which took power after a coup four years ago, would hold an election in early 2019.11 In September 2018, the government relaxed some restrictions on political parties and allowed them to resume organising themselves ahead of a general elections in 2019. However, it still maintained a ban on public gathering of more than five persons and political campaigning.12 On September 12, 2018, the two key organic laws on the election of MPs and selection of Senators received royal approval and were published in the Royal Gazette. This has paved the way for the parliamentary elections to take place. According to the officials of the Election Commission, after receiving royal endorsement, the two laws would take effect after 90 days. Once the laws took effect in December 2018, the Constitution mandated for the conduct of elections for the 500 members of the House of Representatives within 150 days. This meant that the Election Commission was obliged to hold the election before May 2019.13

Amid concerns from government critics and the opposition that the elections could be further postponed, the Deputy Prime Minister Prawit Wongsuwan, on October 3, 2018, addressed the press and stated that there would be no delays and elections would be held between February and May of 2019.14 In October 2018, the PM announced that the ban on political activities would be lifted by December 2018, in anticipation of the elections.15 On December 11, 2018 the ruling military government lifted the nearly five-year-old ban on political activities, with immediate effect. This order was signed by the head of the NCPO, Prime Minister Chan-o-cha and was published in the Royal Gazette on December 11, 2018. The military government cited the need for the public and political parties to campaign freely for the upcoming elections. The new order went on to abolish a number of previous orders enacted by the military government in the wake of the 2014 coup, including prohibitions on political assembly and financial activities for political purposes.16 Finally on January 23, 2019, King MahaVajirilongkorn issued a royal decree which called for a general election to be held in the country in 2019. A few hours later the Chairman of the Election Commission of Thailand Ittiporn Boonpracong announced the date of the general elections as March 24, 2019, when the voting for the 500 members to the House of Representatives would be held.17 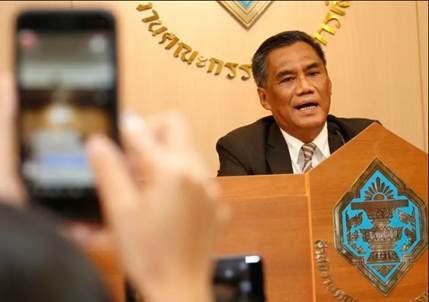 Chairman of the Election Commission of Thailand, Ittiporn Boonpracong announcing the election date on January 23, 2019

The upcoming elections, which many hope will restore democracy in Southeast Asia’s second-biggest economy is much welcomed. However, there has been some scepticism that the amendments to the election process through the new Constitution have been designed to limit the power of the new government. Given Thailand’s long history of having its military dominate the political landscape, the -appointed Upper House or Senate which has been given considerable extra power would have an impact on the election as well as in the running of the next Government. The new Constitution, mandates for military appointees in the Senate and it remains to be seen as to how much space the newly elected Government would have. India and Thailand have witnessed smooth and stable seventy years of diplomatic relations despite Thailand witnessing several internal political changes during this period. The outcome of the forthcoming elections is not likely to have any impact on this trend.

16“Thailand to go to the polls on Feb 24 as govt lifts ban on political activities.”The Straits Times, (December 11, 2019).https://www.straitstimes.com/asia/se-asia/thailands-election-commission-sets-feb-24-election-date(Accessed February 7, 2018)