The US has sent a message through Warsaw conference to the Arab world and European countries that US’s engagement with the region would continue with a focus against Iran.

The Warsaw Middle East Conference - formally known as “The Ministerial to Promote a Future of Peace and Security in the Middle East” was held on 13-14 February 2019. It was attended by over sixty countries at various levels. A similar gathering was witnessed in May 2017 when US President Donald Trump made his maiden visit to Riyadh where, apart from other engagements, he had also addressed leaders, intellectuals and clergies of around 50 Arab-Islamic countries. There were few differences however as the audience in Warsaw was a larger with the inclusion of European leaders and, unlike in Riyadh, the message to Iran against its policies in the region was more explicit. Given the complexities in the West Asia, the conference also reflected on the changing dynamics of the relationship between the Gulf Cooperation Council (GCC) countries and Israel. In Riyadh, President Trump had exhorted Arab-Islamic leaders to fight against Islamic terrorism and extremist forces inter-alia with a subtle reference to Iran and its allies in the region. 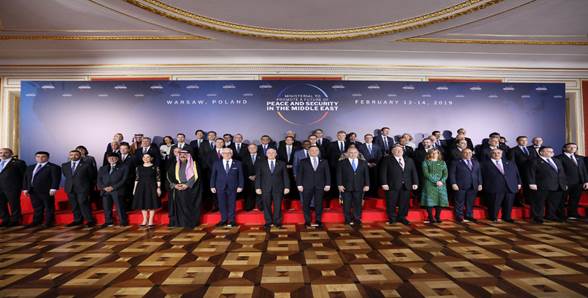 During the deliberations, the US sent a direct message to Iran against its growing regional role and its demonstration of ballistic missile programme. The Trump administration also sent a message to major European countries namely France, Germany and Britain for preserving the Iran nuclear deal as well as creating alternative legal and financial mechanisms for economically engaging with Tehran, which could potentially undermine US sanctions. The other major aim of this conference was to reveal the much-veiled deal, “The Deal of the Century” and convince the Arab leaders to accept a permanent solution to the prolonged Arab-Israel conflict.i But it was later known that content of the deal would be unveiled only after the general election in Israel in April 2019 as announced by US President Trump’s senior adviser, Jared Kushner.The announcement for the Warsaw Middle East Conference was made in the public address during the visit of US Secretary of States, Mike Pompeo at the University of Cairo, Egypt in January 2019. In Cairo, he had stated that the agenda of the Conference would include terrorism, extremism, cyber terrorism, crises in Syria and Yemen and also made an overt reference to Iran’s intervention in politics of the Middle East region.

The conference was attended by the US Vice President, Mike Pence, Secretary of State, Mike Pompeo, Jared Kushner, GCC ministers along with other Arab leaders like Egypt, Yemen, Jordan and Morocco. Israeli Prime Minister Netanyahu was for the first time seen sharing the dais and table with the Arab leaders in any global and regional meeting. Expectedly, the EU member states had merely sent their diplomats, senior officials and junior ministers. Only the UK Foreign Secretary Jeremy Hunt attended the event. The Palestinian authority had already announced its boycott, while Turkey and Lebanon decided not to participate. The High Representative of the EU for Foreign Affairs and Security Policy, Federica Mogherini did not participate in the conference. Russia was invited but did not attend. Moscow stated that the conference “came as a new demonstration of the US administration’s policy towards creating new dividing lines in the Middle East, which is already oversaturated with conflicts and contradictions.”ii The EU decided to have low-level representation to avoid lending diplomatic heft to an event designed to discuss Iran than the crisis in the West Asia and given its policy difference with the US. The Instrument in Support of Trade Exchanges (INSTEX) set up by France, Germany and Britain to allow businesses to evade direct financial transactions with Iran has not gone well with the US plan of isolating Iran. The INSTEX is ‘special purpose vehicle’ designed to evolve a legal and financial mechanism to continue trading with Iran despite US sanctions on Iran.iii Mike Pence said that even the EU mechanism to facilitate trade with Iran was ‘ill-advised.’ He cautioned that this move could create more distance between US and the Europe.iv US Secretary of State, Pompeo said, “It is impossible to achieve peace in the region without confronting Iran”.v He stated that Houthis, Hamas, Hezbollah were real threats, and referred groups which had support from Tehran.

Given the regional geopolitical environment, Poland’s relationship with the US is important. Warsaw is keen to expand its defense partnership with the US. Polish Foreign Minister maintained that a deepening Poland-US relationship was one of the advantages of the conference. The Polish Minister of Defense, Mariusz Błaszczak noted, “Our American partners did not give Poland the responsibility to co-organise this conference without reason. This proves that Poland’s position on the international arena is stronger.”vi What made the venue more important was Poland’s current status as non-permanent member of the UNSC. Poland maintained that it was “undertaking efforts to bring the stands of the United States and the European Union on the Middle East closer together and key to them is preserving Iran nuclear deal.”vii The Polish Minister of Defense, in an interview,  further said Poland along with other members of the European Union believes that the nuclear agreement should be preserved, whereas the United States pulled out of it, and meanwhile he also said that decisive sanctions should also be put in place.”viii However, organizing Middle East conference in Warsaw is not of much significance for Poland’s bilateral ties with other EU’s countries in the region. But the Warsaw meet may create further differences in the EU members, particularly at a time when far right parties are on the rise and differences among the member states on the major issues of political and economic importance of the EU including migration, economic reforms, etc are more visible.ix

President Trump’s prolonged efforts to bring the GCC leaders and Israel on the negotiating table to move towards resolution of the Arab-Israel conflict has as yet failed to yield an outcome. Yet some progress cannot be denied. The Foreign Minister of Yemen sat beside the Israeli Prime Minister Netanyahu and similarly there was an open embrace between Omani Foreign Minister and Israeli Prime Minister. Later Prime Minister Netanyahu tweeted that that Warsaw meeting was a historic turning point for him to stand along with the new Arab leaders in face of Iran’s growing threat to peace and stability in the region.x Reportedly, in a closed-door meeting with the foreign ministers of Saudi Arabia, UAE and Bahrain, Prime Minister Netanyahu jokingly said that he has been dethroned as a chief Iran hawk after these Arab leaders have deemed Iran to be a bigger threat than Israel.xi 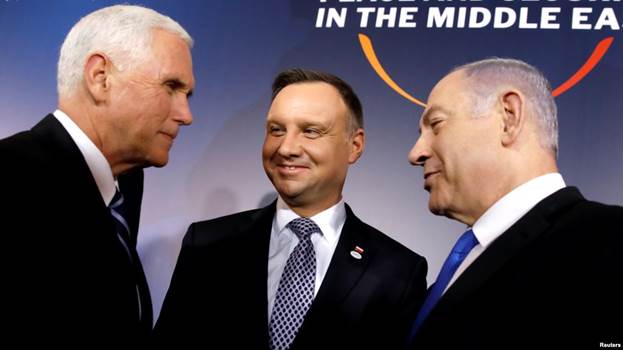 It was also meant to revive the issue of Middle East Strategic Alliance (MESA) representing largely a Sunni world, which was first discussed during President Trump’s first visit to Saudi Arabia in 2017. The US exhorted the creation of this alliance consisting of the six GCC nations and Egypt and Jordan, which has informally been termed as an Islamic NATO.The meeting was also aimed to form an anti-Iran trio of Arab-Israel and Europe to confront Iran against its ballistic missile programme, to mobilize its EU allies against the nuclear pact signed under the presidency of President Obama and to deter Iran from its policies of support to non-state actors in Yemen, Syria, Iraq and Lebanon. Nevertheless, given the differences between the US and the EU, it seemed much progress has not been made.

Similarly, the Saudi enthusiasm for participation in the Warsaw meeting is understandable due to its fear of Iran’s growing ambitions in the region. The ties with the US and Israel were its best shield because of deep convergences between the three nations on dealing with Iran. Further the close partnership with the US would also neutralize the voices of resentment against the Saudi regime over the killing of Khashoggi and Trump might also help in preventing a legislative-cum-judicial process against the Saudi citizens involved in 9/11 known as JASTA.xii

The US failed to receive any pledge from its EU partners that they would comply with its wishes to jettison the Iran nuclear deal. The EU has been supportive of the deal and the US could not convince its EU partners about its abrupt decision to withdraw from Syria, which has further deepened the cleavage between the two old allies. xiii

The enthusiasm of Israeli government about the new historical moment made on Arab-Israel relationship did not fructify into tangible outcome as Netanyahu could hold a closed-door meeting with only a few GCC leaders. This was inevitable subject to a lot of condemnation in the Arab media. Not long after end of the Summit, a campaign was waged under new hash tag “Normalization is treason”.xiv

Though while Netanyahu was photographed with the visiting Omani foreign minister, but immediately after the Warsaw Summit, the Omani foreign minister during his Moscow’s visit  told that his meeting with Netanyahu did not mean normalization of relations with Israel and nothing would move unless an independent state of Palestine came into existence,xv Egypt, which sent its foreign minister to Warsaw, made it clear that Palestine was core to peace and stability in the Middle East as insisted by President Abdul Fattah Al-Sisi in Munich during security conference not long after the Warsaw  meet.xvi Despite the beginning of process for normalization of ties with Israel, there still remains a long way to forge diplomatic and strategic ties between all Arab nations and Israel.

Similarly, on Islamic NATO front, it would not be easy to bring all the GCC players and other nations like Egypt and Jordan on the same board when it comes to the formation of the Islamic NATO because all proposed members of the Islamic NATO have their own internal differences. For instance, Kuwait, Qatar and Oman enjoy good ties with Iran and Egypt and Jordan have their differences with Iran but not of the nature or level like other GCC nations because of several geographic and strategic variations. Further, unlike Saudi Arabia and the UAE, Iran is not a major or immediate threat to Egypt or Jordan, where both deem the Israel-Arab conflict to be more dangerous for their internal security that needs an immediate resolution.

From Warsaw, the US has sent a clear message to the Arab world and European countries that US’s engagement with the region would continue with a focus against Iran. The Middle East conference was another step of the Trump administration which could potentially undermine European multilateral efforts for seeking diplomatic solutions of complex political and security challenges.

xii  Mohammad Manshavi, “Whatever You Want to Know About Warsaw Summit,”