Pakistan Afghanistan borders near the Khyber Pass witnessed significant rise of tensions, with shelling on both the sides from June 12, 2016, due to the construction of a gate by Pakistan, which they claim is for countering infiltration. 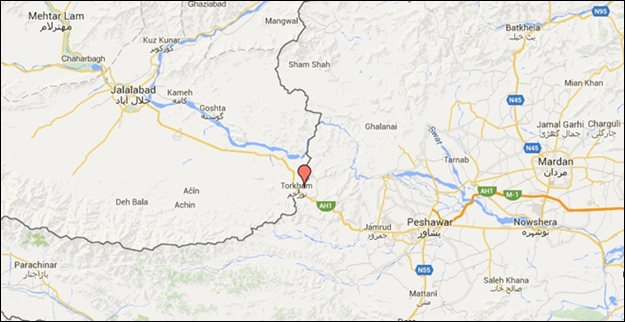 Tensions have been brewing for a while in Pak Afghan border area, close to Peshawar, over Pakistan's attempts to initially fence a 2 kms area, near the Khyber Pass region close to the Torkham border region, which was opposed and stopped by the Afghan government.

Torkham is one of the major crossings between Afghanistan and Pakistan, where hundreds of trucks and thousands of people cross the border daily through the Khyber Pass. When Afghanis forcibly stopped the construction of the fence, it later led to the closure of the border crossing point by Pakistan in May 2016, which blocked the movement of people from both sides of the border. Pakistan accused that such unregulated, largely unguarded, porous and open crossings is leading to infiltration of fighters into Pakistan from the Afghani side, which can be prevented either by fencing the borders or creating a check point. 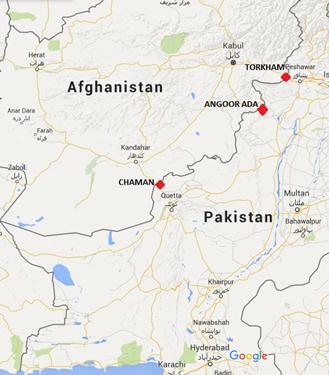 The Afghanistan Pakistan border is demarcated by the Durand Line (about 1,519 miles), established through the Durand Agreement of 1893, which split communities into halves, and which was objected by Afghan leaderships from the time the agreement was signed. No Afghan government ever accepted the Durand Line as an international border1, and therefore objects to all sort of Pakistani border construction efforts till the dispute is not resolved. However, Pakistan does not consider the border to be disputed as the Durand Line has been accepted by the Pakistani leadership as valid and legitimate.  There have been arguments  by analysts that the Durand Line did not give the British the sovereign right over the tribal territories after the demarcation was completed, and was rather a convenient demarcation to recognize one’s sphere of influence. Sir Mortimer Durand was quoted that “The tribes on the Indian side British Indian territory are not to be considered as within British territory.”2 That has strengthened the argument of the Afghan government of not recognizing the Durand Line as the legal border between Afghanistan and Pakistan. The major border crossings between Afghanistan and Pakistan remain to be the Torkham border in the Khyber Pass region, the Chaman – Spin Boldak crossing in the Kandahar province of Afghanistan and Chaman and Quetta in Pakistan and the Angoor Ada – Shkin crossing which is located in  Afghanistan’s Paktika province and Pakistan’s FATA province. 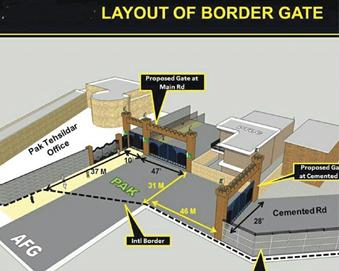 Pakistan, after independence, in 1949 had bombed tribal hamlets falling in Afghan territory to curb unrest in the region on the issue of creating an independent Pashtunistan. This had led to border skirmishes  between Pakistan and Afghanistan during 1949-1950, which even led to the breakdown of diplomatic relations between them in 1955. Relations further worsened in 1961, when Pakistan and Afghan forces clashed in a border flare-up, which did not escalate, due to the proactive role played by US President Eisenhower, who coerced Prince Naim, the then Foreign Minister of Afghanistan to forge closer links with Pakistan and Iran.3 Though there were significant skirmishes that went unreported during the Soviet occupation of Afghanistan, it can be stated that post 2010, there has been a sudden rise of border skirmishes between Pakistan and Afghanistan, where Pakistani Air Force have made intermittent attacks within Afghanistan in the pretext of killing militants.4 In July 2003, Pakistani and Afghan forces had clashed over border posts. The Afghan government claimed that the Pakistani military established bases up to 600 meters inside Afghanistan in the Yaqubi area near the bordering Mohamed Agency, the Yaqubi and Yaqubi Kandao (Pass) area were later found to fall within Afghanistan. In 2007, Pakistan erected fences and posts a few hundred meters inside Afghanistan, near Angoor Ada in South Waziristan, but the Afghan National Army quickly removed them.5 In May 2007, Afghan soldiers attacked Pakistani military outposts which they claimed were illegally built on Afghan soil, one Pakistani soldier was injured. Pakistan's military responded with artillery fire on targets in Afghanistan, reportedly destroying three ANA border posts killing 32 Afghan soldiers.6 In 2011, there were more than nine border skirmishes, which has continued through these years. Such has been the past record of Pakistani adventurism in the Pak Afghan border region.

The most recent fighting erupted in the night of June 12th 2016 at the construction site of the gate in Torkham. As per Afghani media, Pakistan started shelling the Afghan side, when Afghan forces prevented the installation of the gate at Torkham. However, the counter allegations have been made in the Pakistani media regarding Afghan border forces initiating unprovoked firing on Pakistani border guards, while they were peacefully installing the gate.

Construction on the borders has been opposed by the Afghan government as any sort of fencing or construction provides legitimacy to the border line without resolution of the border dispute. As per Afghanistan version, Pakistan is legitimizing the disputed border line through such constructions, which they do not agree to.7 Pakistani forces have been repeatedly trying over the recent years to set up military checkposts and installations.  Angoor Ada, the border check post that was constructed later by Pakistan, was handed over to the Afghani authorities on May 2016, to avoid any confrontation between the two neighbours.8 However, Foreign Secretary Aizaz Chaudhury said that Pakistan did not hand over the Angoor Adda checkpost to Afghanistan, and rather the Pakistan Army only constructed a gate for the Kabul government in Afghan area of the checkpost "as a gift", directly refuting the previous claims of the Pakistani Army.9 In other areas, however, Afghan security forces have reacted and forced them to stop.10

In Torkham, as per Afghan media, Pakistan had initially agreed not to build such installations. But, Pakistan violated the agreement and attempted to build the structures at night. As per Afghan authorities, on the basis of laws and agreement between the two countries with regard to the Durand Line, Afghan border forces have a right to stop violations by Pakistani forces.11

According to Sartaj Aziz, adviser to Prime Minister on Foreign Affairs, building the gate was part of their counter terrorist operations. “Strengthening of management and facilitation of the movement of people and vehicles across the border is an important part of counter-terrorism effort and also for checking drug trafficking and other illegal activities” is what Aziz said while justifying the construction of the gate.12

Both the countries  deployed additional troops and heavy military equipment including tanks in the region, in view of the growing tension.13 Islamabad and Kabul  summoned each other’s diplomats to lodge strong formal complaints against each other’s actions. A number of Afghan MPs  stated to Afghani media that time has come for America to announce its position against Pakistan in line with the commitments it made in the strategy agreement between Kabul and Washington and prevent Pakistan from interfering in the affairs of Afghanistan.14 As per US State Department spokesman John Kirby, they closely monitored the situation and were in touch with the officials of both the governments.15

Both the conflicting parties declared ceasefire in the region, after meeting for a short time on Wednesday, June 15, 2016, after which they waved white flags on their respective sides. However, the construction work on Torkham gate also continued following the ceasefire announcement.16 The Torkham border crossing was reopened after a meeting of the border officials at what was described by the Pakistani Foreign Office as the ‘zero line’.17

Meanwhile, notwithstanding the US public position of not mediating in the row, General John Nicholson, who heads NATO’s Resolute Support Mission in Afghanistan, visited Army Chief General Raheel Sharif at the General Headquarters, to discuss regional security issues and matters of mutual interest including border management mechanism along Pak-Afghanistan border.18 However, the impact of the visit was felt when both the Pakistan and Afghan leaderships initiated the process of rapprochement.

To de-escalate tensions, Sartaj Aziz invited Afghan National Security Advisor Hanif Atmar and Foreign Minister Salahuddin Rabbani to pay a visit to Pakistan for talks over the issue. However, the Afghan government decided to send a delegation to visit Islamabad on June 20, 2016, led by Deputy Foreign Minister Hekmat Khalil Karzai to discuss Torkham related issue.19 The Pakistan side was led by Foreign Secretary Aizaz Ahmad Chaudhary. The two sides discussed ways and means to check illegal cross-border movement as well as the recent tension at Torkham border. The two sides agreed to share their ideas with the leadership. The need for creating a suitable mechanism for consultation on border management issues were also emphasised during the meeting.20 Later, Adviser to the Prime Minister on  Foreign  Affairs  Sartaj  Aziz  and  Afghan Foreign Minister Salahuddin Rabbani, held a meeting on the sidelines of the SCO Summit in  Tashkent, where Afghan National Security Adviser Haneef Atmar was also present. They agreed to constitute a high level bilateral mechanism for consultation and coordination on various important issues relating to bilateral relations and cooperation, including security, movement of people and vehicles between the two countries and other relevant issues. It will also have a joint technical working group to deal with the concerns of both countries. The main purpose of this Mechanism would be not only to address and resolve issues of concern to both sides through amicable means but also to prevent the recurrence of violent incidents like the ones witnessed recently in Torkham.21

It can be assessed that Pakistan, time and again, has tried to test the patience of the Afghan government through border incursions, setting up of military bunkers by Pakistani troops along the border in eastern and southern provinces and construction of border check posts and fences, which has been mentioned before, which has always been a matter of consternation for the Afghan government. This present situation of conflict was controlled before it escalated further, which could have inflicted more harm to Afghanistan and Pakistan, including the ongoing peace process. .  If Pakistan does not desist on making incessant attempts to overlook the disputed nature of the border, not making attempts to understand the Afghan government’s grievances, there will be such border disagreements and skirmishes in the future as well. Such conflict  on the borders will also jeopardize hopes of having intermittent transport of goods and people from the border regions.

*The Author is Research Fellow at the Indian Council of World Affairs, Sapru House, New Delhi.

12 “More cross-border firing at Torkham as US calls for resolution”, The Dawn, June 16, 2016, http://www.dawn.com/news/1264990/more-cross-border-firing-at-torkham-as-us-calls-for-resolution

15 “More cross-border firing at Torkham as US calls for resolution”, The Dawn, June 16, 2016, http://www.dawn.com/news/1264990/more-cross-border-firing-at-torkham-as-us-calls-for-resolution