Taliban’s victory in Afghanistan has many African nations worried about its likely impact on the terrorism in Africa. Al-Qaeda, Islamic State and many other terror groups are active in various parts of Africa and have grown in their reach, sophistication and impact in the last decade. African countries such as Somalia, Mali and Nigeria have been battling Islamist terrorists for years.[1] To support these nations, major powers like France and the United States (US) have also been engaged in the counter-terror efforts in Africa.[2] However, despite the collective efforts, the terror threat in many African countries has not waned in any significant way. In this context, the victory of Taliban in Afghanistan is likely to inspire and reenergize Islamist terror outfits in Africa.

As the endgame in Afghanistan was being played out, policymakers as well as experts in Africa were watching the unfolding developments warily. Even terror groups were keenly following the progress of Taliban’s offensive. Therefore, when Taliban took over Kabul, their triumph in Afghanistan was celebrated by many terror groups in Africa. BBC reported that a media outlet associated with Somalia’s Al-Shabaab terror group wrote that “God is great.”[3] Moreover, the leader of Al-Qaeda’s affiliate group in West Africa, Jamaat Nusrat al-Islam wal-Muslimin (JNIM), Iyad Ag Ghaly, sent out his first public message since 2019 to congratulate the Taliban. He said that “we are winning” in the context of planned French drawdown of troops from West Africa.[4] Meanwhile, France, which is a major security partner for African governments in their fight against terrorism, plans to reduce its troop presence in the region from about 5000 to 2500 by early next year.[5]

Even Chad, an important regional partner in the counter-terror operations conducted across the region, is planning to reduce its troop presence by half from the G-5 Sahel forces. (Five Sahel states, Burkina Faso, Chad, Mali, Mauritania and Niger, have established G-5 intergovernmental cooperation framework to respond to the shared challenges, including security threats like terrorism, in a regional manner.) The Chadian military spokesperson was quoted as saying that, “This is a strategic redeployment to better adapt to the organisation of the terrorists.”[6] However, Chad is fighting rebels at home and the troop withdrawal from G-5 Sahel forces is also necessitated for that purpose. Chadian military is considered as the capable force in the Sahel region and therefore, the exit of Chadian forces along with the French troops is likely to affect the anti-terror operations adversely. There are parallels to be seen between the reduction of French troop presence from the Sahel and American troop withdrawal from Afghanistan.

French withdrawal is likely to affect Mali the most. There is a genuine concern that on their own, Malian troops will not be able to contain the Islamist terrorists. It was the failure of Malian troops in 2012-13 to stop the advancing Islamist forces from the North that prompted the French intervention in a major way.[7] Many believe that the situation in Mali and Afghanistan are comparable wherein just like Afghanistan, Mali has a weak state structure which is critically dependent on foreign support. It is a well acknowledged fact that foreign support and French troops are crucial in the fight against Islamist terrorists in the Sahel region. 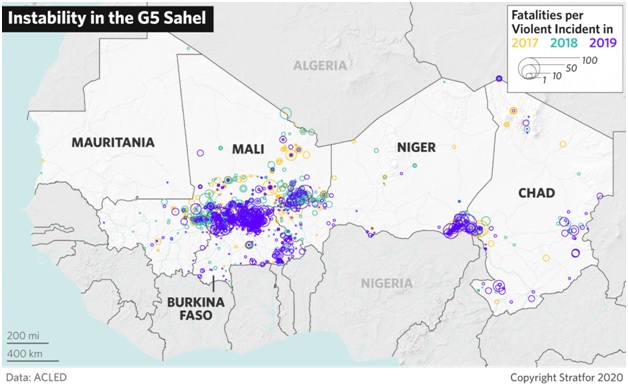 In West Africa, Boko Haram and later, Islamic State of West Africa Province (ISWAP) has managed to consolidate its presence around the Lake Chad region. Nigeria is the most affected state due to the activities of Boko Haram and ISWAP with hundreds killed and thousands of people getting displaced. Similarly, in the East Africa, Al-Shabaab, operating out of unstable Somalia, remains a potent threat.[8] In the late 1990s, Al-Qaeda terrorists in East Africa had attacked US embassies in Kenya and Tanzania, which killed hundreds.[9] Even now, Somalia’s fragile state and weaker internal security capabilities are likely to be exploited by the Al-Shabaab. The foreign support including military assistance, training and targeted air strikes are essential for containing the terror threat emerging out of Somalia. Islamists have also gained ground in northern Mozambique and are operating in the Democratic Republic of Congo (DRC).[10] Islamists in Mozambique had taken over the Cabo Delgado province which is crucial for Mozambican gas industry and the Government of Mozambique had to seek external support to take back control of the region. 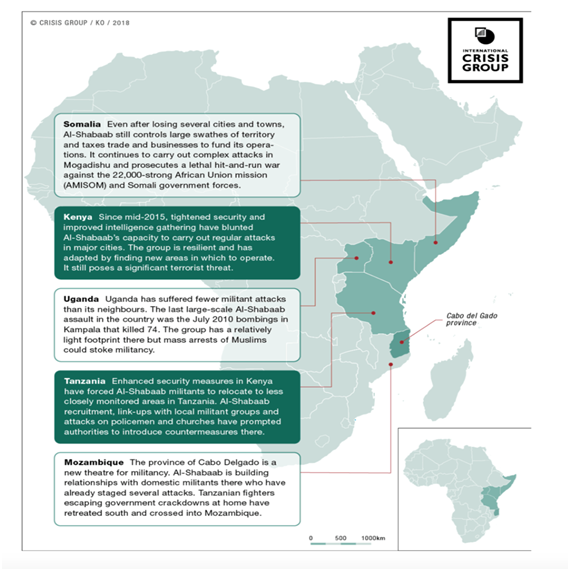 With the victorious Taliban in Afghanistan, East African states are also worried about the potential rise of illicit trade of drugs as Afghanistan is one of the largest producers of heroin.[11] In the last few years, East and Southern Africa’s coastline has emerged as an integral part of the drug smuggling route known as the ‘southern route’. Through this route, heroin from Afghanistan is sent to western markets.[12] Moreover, the consumer markets for heroin are growing in the East and Southern African region.[13] Smuggling networks have links with criminal activities in East Africa as well. Previously, the US-supported Afghan government was taking measures, albeit unsuccessfully, to curb poppy cultivation. East African states are now worried that with the Taliban in charge of Afghanistan; heroin smuggling is likely to go up. Some elements of Taliban, especially those in the southern Afghanistan, have deep links with drug smuggling and in fact, as per reports, they make money through the drug trade.[14] It will be interesting to see how the Taliban-led government deals with the problem of poppy cultivation.

There are lessons to be learnt from the recent developments in Afghanistan. Security experts are advising African governments to take corrective steps to ensure that terrorists do not gain further ground. There is a view that the reduction of French forces from the Sahel is an ominous signal for the counter-terror efforts and France can perhaps rethink the decision to reduce its troop presence.[15]

On 15th August, while the Taliban was taking over Kabul, Nigeria’s President Muhammadu Buhari wrote an op-ed in the, London-based Financial Times. Nigeria is a victim of Boko Haram-induced terrorism and it is fitting that Nigerian President should make an appeal to the international community, especially to the US. In the article, he made a persuasive case for more American assistance to fight terrorism in Africa. President Buhari argued that, although Africa has its own soldiers, fighting the terrorists, “more can be done to help with technical assistance, advanced weaponry, intelligence and ordinance.”[16] He was quick to point out that, military assistance is necessary but not sufficient to curb terrorism in Africa. The Continent needs the US to help in closing “the disparity between our economic and demographic growth.”[17] In fact, he noted that since 2001, when the US’ Global War on Terror (GWoT) began, Africa’s population has nearly doubled now. However, during the same period, despite having some of the fastest growing economies of the world, the employment opportunities in Africa have not increased sufficiently. In this context, terrorist groups have succeeded in attracting unemployed, poor youth which feels it has no hope for a better future. Therefore, Buhari wrote that, “Yes, we require the technological and intelligence support that our armies do not possess. Yet the boots we need on the ground are those of constructors, not the military. Africa’s fight against terror is the world’s fight.”[18] Buhari’s article does not dwell on the question of ideology for these terror groups. It is more concerned about the links between development and security. In fact, the article underscores the role of economic development in defeating terrorism. Buhari writes that “We will defeat them one highway, one rail link — and one job — at a time.”[19] It seems that Buhari wants technical and developmental support in the anti-terror operations but appears wary of foreign troops on the ground. It remains to be whether he’ll be able to walk the talk.  Meanwhile, the world would do well to heed warnings emanating from Africa.

[11] Aggrey Mutambo, “Why Taliban takeover is causing anxiety in Africa”, The East African, August 21, 2021. Available at: https://www.theeastafrican.co.ke/tea/news/east-africa/why-taliban-takeover-is-causing-anxiety-in-africa-3519570 (Accessed on August 25, 2021).