The conflict in Northern Ireland began in late 1960s and lasted for over three decades. This period (from 1960s-1998), known as ‘The Troubles’, resulted in violent sectarian conflict between the Protestant unionists (loyalists), who wanted to remain part of the UK, and the Catholic nationalists (republicans), who favoured unification with the Republic of Ireland.

The Good Friday Agreement was signed in April 1998 to end this period of conflict. The Agreement was signed between the British and Irish governments along with the four main stakeholders of Northern Ireland – Sinn Fein, Ulster Unionist Part, the Social Democratic and Labour Party, and the Alliance Party. The Democratic Unionist Party (DUP) abstained from signing the agreement. The agreement[i] laid the foundation of the power-sharing framework between the unionists and nationalist parties. It confirmed that Northern Ireland would remain part of the UK but stipulated that Ireland could be united if there were majorities in both Northern Ireland and the Republic of Ireland, i.e., the Consent Principle. It also called for a devolved government – with transfer of power from London to Belfast. It established a Northern Ireland Assembly and Executive Committee in which unionist and nationalist parties would share power; it also contained provisions on decommissioning (disarmament) of paramilitary weapons, policing, human rights, security normalisation (demilitarisation), and the status of prisoners. 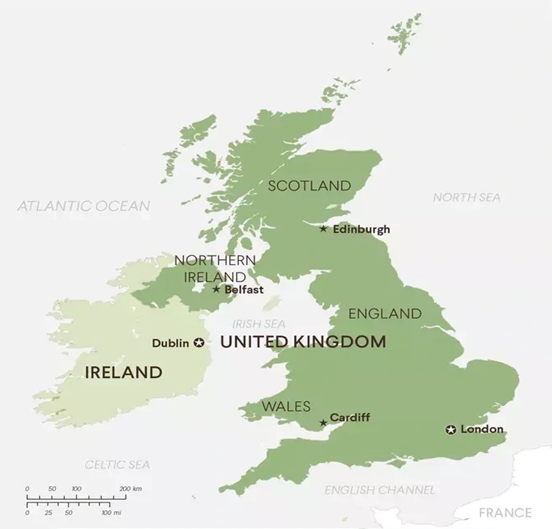 As Northern Ireland has benefited significantly from EU funding and is the only region of the UK that share a land border with an EU member state (Republic of Ireland), Brexit raised concerns in various sectors, as well as for the peace process and cross-border cooperation. The land border emerged to be the most contentious issue during the Brexit negotiations. Throughout the negotiations, UK and EU sought to avoid the implementation of hard border while maintaining the sanctity of the Good Friday Agreement. The new partnership agreement between the EU and the UK, negotiated over the course of 2020 and implemented starting in January 2021, settled on a complicated solution: the Northern Ireland Protocol.

While negotiating the Brexit deal, both the EU and UK recognised the unique circumstances of the island of Ireland and the necessity of avoiding a hard border on the island to safeguard the 1998 Good Friday Agreement and to maintain the North-South cooperation. The Northern Ireland Protocol emerged as an arrangement for the same and it aimed to[iv]:

This was done through implementation of physical checks on products when they arrive in Northern Ireland from mainland UK – making Belfast part of the EU’s single market so as to avoid the hard border on the island of Ireland. Moreover, the EU’s rules on customs and regulations of agri-products are applied to the goods arriving in Northern Ireland. Also, the European Court of Justice (ECJ) has overseeing powers over the Protocol.

These provisions came into force on 1 January 2021 when the transition period under the Brexit deal ended. The implementation of the Protocol led to disruption of supplies from Britain resulting in food shortages. This was primarily because all movements of goods from Great Britain to Northern Ireland require a customs declaration and checks. To handle the situation, a three-month extension was agreed between EU and UK to exempt the checks on the goods entering from Britain. However, the UK government’s decision to unilaterally extend the suspension of checks until 1 October 2021, resulted in the EU launching legal action against UK. Both UK and EU have published their proposal and counter proposal for updating the Protocol. The UK has called for significant changes in the Protocol such as - removing checks and paperwork between Great Britain and Northern Ireland; removing the role that the ECJ had in overseeing how the Protocol works; new flexibilities in areas such as VAT and for medicines to be removed from the scope of the Protocol entirely[v]. For its part, the EU has ruled out any renegotiation of the text of Protocol, instead in October 2021 they put forward a proposal to include[vi] – first, an 80% reduction in checks on food products arriving in Northern Ireland; second, 50% reduction in paperwork to facilitate the movement of goods; third, pass legislation to allow the trade in medicines between Britain and Northern Ireland to continue; and fourth, enhanced engagement with Northern Ireland stakeholders and authorities.

These changes come at a time when the political situation in Northern Ireland is unstable. The assembly elections of May 2022 led to the emergence of Sinn Féin as the largest party at Stormont, gaining 29% of votes and becoming the first nationalist party to hold the position of First Minister. They were followed by Democratic Unionist Party (DUP) which received 21% of the votes, and Alliance Party receiving 13.5% votes. However, DUP blocked the formation of a new power-sharing administration in Northern Ireland, until concerns about the Northern Ireland Protocol are resolved. Under power-sharing rules, the executive cannot be formed unless the DUP nominates a deputy first minister and other ministers. This effectively means that Northern Ireland does not have an executive at present.

Changes Proposed by the UK

The UK has, time and again, said that the Northern Ireland Protocol signed as part of the Brexit deal, has not been working effectively. The UK government published on 13 June 2022 a bill to amend certain sections of the Protocol. Four key amendments proposed in the Bill includes[viii] –

Second, Dual Regulatory System, under which the businesses can choose whether to abide by UK or EU regulations when selling goods in Northern Ireland. The bill calls for the person complying to choose which regulatory route are to be complied with.

Third, Changes in taxation and state aid. Northern Irish businesses are currently governed by EU rules on state aid and VAT. In the bill, the government aims to override these rules and regulations, and has proposed that spending and tax policies for Northern Ireland are to be decided by London only.

The EU’s Negotiator for Brexit, Maroš Šefčovič, in his statement of 17 May 2022 said that - “The announcement by the UK government, however, to table legislation that would disapply constitutive elements of the Protocol, raises significant concerns…the Protocol is an international agreement signed by the EU and the UK. Unilateral actions contradicting an international agreement are not acceptable.”[x] He further highlighted that the renegotiation of the Protocol remains unrealistic and that EU has shown understanding for the practical difficulties in implementing the Protocol and that the Union remain keen to further explore the full potential of the flexibilities with the UK government.

The publication of the Bill was followed by the decision of the European Commission on 15 June 2022 to restart the infringement proceedings[xi] of March 2021 against the UK for not complying with the significant parts of the Protocol to the second stage by issuing a Reasoned Opinion. The March 2021 proceedings were put on-hold as a sign of ‘good-faith’ and constructive cooperation to create the space for joint solutions. Arguing that “UK's unwillingness to engage in meaningful discussion since February – and this unilateral action – goes directly against this spirit” – the Commission has given two-months to the UK government to reply, failing which it will consider taking the UK government to the ECJ.

In addition, it also launched two new infringement proceedings against UK – “first, for failing to carry out its obligations under the EU's sanitary and phytosanitary (SPS) rules. In particular, the UK is not carrying out the necessary controls, and is failing to ensure adequate staffing and infrastructure, at Border Control Posts in Northern Ireland. It has also issued guidance that has the effect of disapplying EU law. And second, for failing to provide the EU with certain trade statistics data in respect of Northern Ireland, as required under the Protocol”. Brexit Negotiator, Maroš Šefčovič, in a Press Conference on the announcing infringement proceedings said – “Let there be no doubt: there is no legal, nor political justification whatsoever for unilaterally changing an international agreement…Let's call a spade a spade: this is illegal. This UK bill is extremely damaging to mutual trust and respect between the EU and the UK.”[xii]

The reactions from Northern Ireland were also critical with a majority members of the Northern Ireland Assembly - Sinn Féin, Alliance and the Social Democratic and Labour Party (SDLP), in a letter to Prime Minister Boris Johnson rejected “in the strongest possible terms Government's reckless new Protocol legislation, which flies in the face of the expressed wishes of not just businesses, but most people in Northern Ireland.” The letter was signed by 52 of the 90 Assembly members stating that “we strongly reject your continued claim to be protecting the Good Friday Agreement as your Government works to destabilise our region”.[xiii] Similar sentiments were also shared by Irish Taoiseach, Micheál Martin said that “the action by the UK represented a fundamental breach of trust” and that he “does not accept that the Northern Ireland Protocol was undermining the Good Friday Agreement”.[xiv]

The Confederation of British Industry (CBI), based in London, also warned the government that overriding of the Protocol can force the companies to think again about investing in Britain. Adding that “rather than political grand-standing”[xv], there is a need for immediate talks with the EU to resolve the impasse over the Protocol. The CBI also issued a revised economic forecast for the country revising the GDP growth to 3.7% as against 5.1% estimated earlier, due to high inflation rates and impending stand-off with the EU.

Prime Minister Boris Johnson, in an article written to Belfast Telegraph on 16 May 2022, emphasised that - “there is no disguising the fact that the delicate balance created in 1998 has been upset. One part of the political community in Northern Ireland feels like its aspirations and identity are threatened by the working of the Protocol. And the Protocol involves other responsibilities which also need to be lived up to by all sides, including the commitment to protect the Belfast Good Friday Agreement in all its dimensions.”[xvi]

In its current form, the Protocol ensures there is no hard border on the island of Ireland, by keeping Northern Ireland within the EU’s single market for goods. But critics of the Protocol, the Unionists, are opposed to these checks arguing that it effectively creates a trade border in the Irish Sea and undermines the integrity of British market. While Prime Minister Johnson has said the changes introduced are “relatively trivial” - the bill aims to override significant parts of the EU-UK withdrawal agreement, which is an international treaty. It reduces the EU law provisions under the Protocol which regulate the movement of goods and also aims to end the ECJ’s oversight on the application of the Protocol.

Despite the political pulls and pressures, the public opinion in Northern Ireland for the Protocol remains positive. The survey[xvii] released in May 2022, highlighted a “significant shift towards support for the Protocol,” with 33% saying it is “on balance a good thing,” as compared to 16% in 2020. In terms of the idea that Brexit has made it more likely for a united Ireland, 63% said expressed the belief that the “likelihood of Irish unification has increased as a result of Brexit”, up 5 points from 2020 (58%).

[i] The Belfast Agreement – An Agreement Reached at the Multi-Party Talks on Northern Ireland, UK Government, https://assets.publishing.service.gov.uk/government/uploads/system/uploads/attachment_data/file/1034123/The_Belfast_Agreement_An_Agreement_Reached_at_the_Multi-Party_Talks_on_Northern_Ireland.pdf, Accessed on 15 June 2022