On 9th July 2022, Kiribati announced its decision to withdraw from the PIF, on the eve of the first-in-person summit of leaders, since the pandemic.  The 51st PIF leaders’ meeting was held in Suva, Fiji from 11-14 July, 2022, chaired by Prime Minister (PM) of Fiji, Frank Bainimarama. New Zealand PM Jacinda Ardern and Australian PM Anthony Albanese travelled to Fiji, to participate in the forum. US’ Vice President Kamala Harris, addressed the meeting virtually. Besides Kiribati, leaders of Nauru, Marshall Islands and Cook Islands did not participate in the 51st meeting of the PIF, instead sent their representatives.

The South Pacific region has been undergoing many important developments recently. The rupture in the PIF can also have larger geopolitical consequences in the long run. Kiribati’s withdrawal comes as a setback to the efforts made over last one year (since Micronesian members[i] had announced their intention to exit from the Forum), to mend the rift among member countries. It challenges the future of PIF and regionalism in the South Pacific region. After much deliberation, on 7 June 2022, Pacific leaders had managed to reach a crucial deal i.e., Suva Agreement, to prevent the PIF from breaking up. While signing the agreement, President of the Federated States of Micronesia, David Panuelo said that “the deal has lifted the big dark, dark cloud that has been hanging over the Pacific”.[ii] However, just before the PIF Summit, on 9 July 2022, Kiribati’s President Taneti Maamau in a letter to the Secretary General of PIF, wrote that Kiribati’s concerns had not been adequately addressed and that his country did not sign the Suva agreement and Kiribati will not be participating in the Forum Summit.[iii] Domestically, opposition in Kiribati expressed that “they were shocked and disappointed by the government's decision to withdraw from the Forum”.[iv]

The 51st PIF leaders’ meeting also saw the absence of leaders of two other Micronesian members Nauru, which did not attend owing to COVID situation in the country and Marshall Islands, which did not participate due to failure to resolve internal legal process to undo the previous decision of exiting the PIF.[v] The Cook Islands also did not attend the summit due to national elections in three weeks. [vi]

Kiribati’s exit from the PIF at a critical time, when the region is already experiencing geopolitical manoeuvring and great power contestation can have long-term consequences. A major recent development has been the switching of the allegiance of Kiribati and Solomon Islands, from Taiwan to China. Kiribati is one of the smallest countries of the region but has a significantly large and resource rich EEZ of 3.5 million square kilometers. Kiribati is particularly important for Beijing as it houses China’s satellite tracking station which is China's only offshore satellite facility.[vii] The President of Kiribati Taneti Maamau, had also visited Beijing in January 2020, and during the visit he expressed willingness to support more Chinese investments in Kiribati. China’s active presence in Kiribati can be a cause of apprehension to the US and its allies in the region.

Another very crucial development recently has been, the Solomon Islands signing the Framework Agreement for Security Cooperation with China in April 2022, marking Beijing’s first known bilateral security agreement in the Pacific. The deal, regional countries fear, can result in China’s active military presence in the region. Soon after the deal, Chinese Foreign Affairs Minister, Wang Yi, visited eight island countries-the Solomon Islands, Kiribati, Samoa, Fiji, Tonga, Vanuatu, Timor-Leste and Papua New Guinea, from 26 May to 4 June 2022. There were also reports about China’s intention to sign a region wide pact with PICs, however, it did not actualise.

Australia had raised concerns over a possible military base close to it, in the light of China-Solomon deal. Australian PM Anthony Albanese, attended the PIF meeting, and held bilateral meetings with some of the island countries, on the sidelines of the Summit. PM Albanese said that “we've made very clear, we'd be concerned about any permanent presence there in the Solomons, so close, of course, to Australia”.[viii] After his meeting with Solomon Islands PM Manasseh Sogavare, he expressed that he is “very confident” that China will not be allowed to set up a military base in Solomon Islands.[ix]

Prior to the PIF Summit meeting, during the media interaction, referring to the China-Solomon Islands deal, New Zealand PM Jacinda Ardern said that “we have a very strong view on militarisation of the region”.[x]…..Reacting to how a deal signed by an individual country affects the entire Pacific family, she said that “I think what we need to establish- as a forum and as a family - is just what the expectation is when we have attempts to create new relationships that may have an effect on the region? What notice ... does the region expect to have? And is it reasonable to expect that as a family, we try and provide for those needs first and foremost?” [xi]

The US, a Dialogue Partner of PIF, was invited to speak by Fiji, the Forum Chair. Last year in August 2021, the US had participated for the first time in the PIF Summit, at the level of President, when President Joe Biden had addressed the virtual Summit. This year, Vice President Kamala Harris addressed the 51st Forum meeting virtually where she stressed that the US has “an enduring commitment to the Pacific Islands”…. “In recent years, the Pacific Islands may not have received the diplomatic attention and support that the region deserves, that is going to change now”. She announced $60 million dollars per year for the next 10 years for the region.[xii] She also announced that the US will appoint it’s first-ever Envoy to the PIF and will launch the process to establish two new embassies in the region: in Tonga and Kiribati.

Apart from the China factor, that has recently dominated discussion about the South Pacific region. 51st PIF Summit meeting highlighted that climate change remains the number one challenge for the region and regional coordination, collective international advocacy on the critical issue of climate change and sustainable development remains priorities for the Blue Pacific. Addressing the Summit Forum Chair, PM of Fiji Frank Bainimarama expressed that Kiribati will always be a part of the Pacific family. He emphasised that united Pacific and regional solidarity is essential as the region navigates the waters ahead dealing with challenges from Covid-19, climate and conflict. [xiii]

Issues within the PIF

The PIF, formed in 1971, as the multilateral platform, based on the ‘sense of common identity and purpose’,[xiv] is the major regional organisation in the South Pacific. It provides the small and remotely located countries an opportunity to be heard and to attract the attention of the international community. The members of the Forum are a heterogeneous group. As the rising significance of the Indo-Pacific region has brought attention to the small island nations in the South Pacific, the PIF has become even more important for articulating a united voice of the member countries on the international stage. 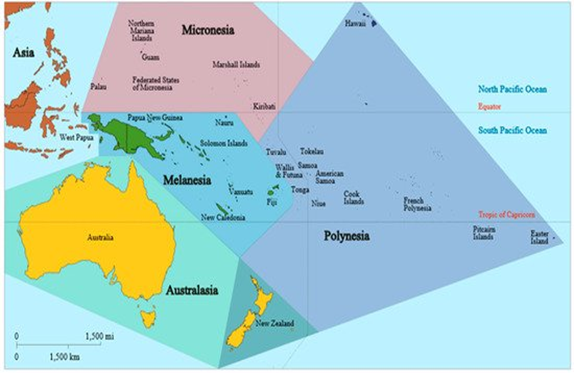 The 51st meeting of PIF, was held under the shadow of Kiribati announcing its withdrawal from the Forum and shifting trends in the regional geopolitics in the light of China bolstering its economic and diplomatic footprint. The current crisis goes back to the five Micronesian Members of PIF announcing, in February 2021, that they have decided to quit the organisation over the issue of appointment of the new Secretary General of the PIF (Henry Puna, PM of Cook Islands from Polynesia region), Kiribati was one of them. Henry Puna replaced Meg Taylor from Papua New Guinea from Melanesia region as the Secretary General of the PIF. Micronesian members, including Kiribati, Nauru, the Federated States of Micronesia, Marshall Islands and Palau, were unhappy over appointment process of the Secretary General of the PIF, insisting that it was Micronesia’s turn for Forum’s top position. They were of the view that the informal understanding to respect a “gentleman's agreement” to rotate the post of Secretary General among three sub-regions of Polynesia, Micronesia and Melanesia was not followed[xv], as Henry Puna, PM of Cook Islands, a Polynesia candidate, was appointed as the Secretary General. In a Joint Communiqué, issued on 9 February 2021, the leaders of five Micronesian countries expressing “great disappointment" with the appointment process, had agreed “to initiate the formal process of leaving the Forum”.[xvi]

This divide in the Forum had also brought to the fore, that there has been implicit tension between the North and the South within the group.[xvii] There is a feeling that the group is dominated by the South especially bigger players including Australia, New Zealand and Fiji.[xviii] Micronesian nations feel that Canberra and Wellington want to preserve their influence in the South Pacific.

Since then, members of the PIF have been hopeful of possibility of ‘resolution to this impasse’ in the interest of ‘regional unity and solidarity’ especially in the face of existing pan-regional challenges of climate change, COVID-19 and pandemic induced economic slowdown. As the then Forum Chair PM of Tuvalu had commented that the decision was unfortunate and that it would have an impact on ‘Pacific regionalism and collective action’. [xix]

The Suva Agreement reached in Fiji on 7 June 2022, in presence of the leaders of island countries, resulted in agreement that Micronesian leaders agree that PM OF Cook Islands, Henry Puna will serve out his term as Secretary General till 2024, after which, he will be replaced by a Micronesian candidate.[xx] However, Kiribati did not attend that meeting and sign the agreement, and instead decided to withdraw from the PIF forum. Later the Suva Agreement was endorsed at the PIF Summit, with leaders of 17 member countries signing the agreement, as a political commitment to reform the forum.[xxi] Leaders present at the forum also agreed to continue dialogue with  Kiribati in the interest of Pacific unity.

The geopolitical environment of the region is changing swiftly, particularly with China’s increasing economic, diplomatic and strategic clout and traditional regional players’ concerns around it. Tensions have also been apparent between the North and the South Island members of the PIF, raising concerns of the disintegration of the Forum. At this stage,  Kiribati’s exit from the only regional organisation which brought these countries together to discuss common challenges and shared interests, to work collaboratively on wide ranging issues such as coordinating response to COVID-19 and post-pandemic recovery, climate change, information technology, trade and investment, sustainable development, public health, maritime security, disaster management, people to people contacts, etc., can  have implications for region’s prosperity and stability in the long term.

[i] The three groups of islands in the South Pacific region are: Micronesia:  Kiribati, Nauru, the Federated States of Micronesia, Marshall Islands and Palau

[v]Marshall Islands prevents itself from participating in Forum, 12 Jul 2022,  https://www.rnz.co.nz/international/pacific-news/470744/marshall-islands-prevents-itself-from-participating-in-forum

[ix] Australian PM Albanese ‘very confident’ there will be no Chinese bases in Solomon Islands, https://www.theguardian.com/australia-news/2022/jul/14/australia-pm-anthony-albanese-very-confident-no-chinese-bases-china-solomon-islands-pif-pacific-islands-forum

[xviii] With smaller population and economies, the Micronesian nations feel marginalised in some ways by their larger, more influential and economically bigger neighbours in the south. As Federated States of Micronesia President David Panuelo commented, “what we have seen is a south Pacific that looks down on the north Pacific” (see:https://www.abc.net.au/radio-australia/programs/pacificbeat/fsm-pres-covid-pif/13120114)