Shattering the five-month long ceasefire, the fighting has resumed in northern Ethiopia again since August 24. The fighting began along the southern border of the rebellious Tigray region that adjoins the Amhara region. As per reports, Ethiopia’s Army and the Amhara militia which is allied to the Government had amassed considerable force along the Tigray-Amhara border and that the TPLF has inflicted severe losses on these forces.[1]

The Tigrayan People’s Liberation Front (TPLF)[2] and the Ethiopian government have accused each other of breaking the ceasefire. With the Eritrean Army entering the conflict, as it had done so when the conflict began in November 2020, to help Ethiopia, the conflict has assumed wider regional dimensions as well.[3]

The conflict in Ethiopia has been raging for almost two years now and the fortunes of both sides have shifted back and forth. Initially, the Ethiopian Army seemed to be on the ascendant trajectory. However, the TPLF fought back and had even reached within the 200-miles of the Ethiopian capital Addis Ababa last November.[4]

The effective use of Turkish drones and the leadership skills of its Nobel-prize winning Prime Minister Abiy Ahmed helped Ethiopian Army to hold the TPLF’s advance and even inflict a retreat.[5] By March 2022, both sides had suffered considerable amount of losses in men and material and agreed to enter into a ceasefire.[6] Since then, efforts are going on to find a diplomatic solution to the crisis.

African Union (AU) had appointed former Nigerian President Olusegun Obasanjo as its envoy whereas there was a joint American-Kenyan effort led by the outgoing Kenyan President Uhuru Kenyatta.[7] Representatives of the Ethiopian government and the TPLF had engaged in secret talks in Djibouti and Seychelles as well.[8] However, the peace efforts seemed to have broken down in August. With the renewed round of hostilities, the peace in Ethiopia seems distant for now.

Meanwhile, the region of Tigray has been gripped by a humanitarian crisis since November 2020 as the Ethiopian Government blockaded the land-locked region. The TPLF has accused the Ethiopian Government of using hunger as a weapon of war.[9] Given the seriousness of humanitarian crisis, international food assistance began to trickle into the Tigray under the rubric of World Food Program. However, as per estimates, almost five million people in Tigray, which is about 90% of the population of the region, need food aid.[10] Moreover, as many as 500,000 Tigrayans have reportedly died due to hunger.[11] 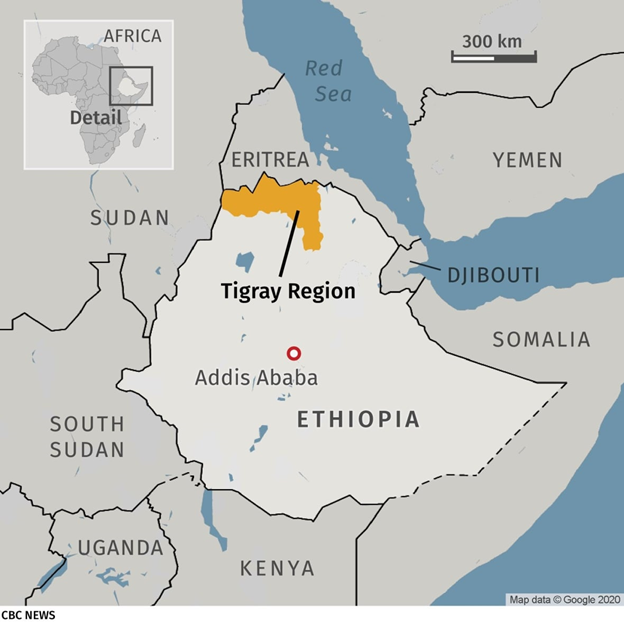 The looming drought in the Horn of Africa and prior to that, the disruption of food exports from the Black Sea region due to the Ukraine-Russia War along with the unwillingness of Ethiopian Government to allow the humanitarian assistance to Tigray has complicated the effort.

As a result of the war and the instability, the United States (US) has removed Ethiopia from the African Growth and Opportunity Act (AGOA) which entailed duty-free access for Ethiopian products to the US market.[12] International Monetary Fund (IMF) refused to publish the economic outlook for Ethiopia for 2022. Renewed round of fighting will only worsen the situation on the economic as well as on the humanitarian front.

The entry of Eritrean Army from the North will perhaps relieve TPLF’s pressure on the Ethiopian Army. However, in absence of any credible peace effort, the conflict will continue to simmer in Ethiopia.

Meanwhile, sensing the preoccupation of Ethiopian security establishment with the conflicts in north, the Al-Shabaab terrorists, operating out of Somalia, had struck from the south in the last week of July. As many as 500 Al-Shabaab operatives entered Ethiopia from their bases in Somalia. As per reports, Al-Shabaab’s “plan is to erect their black flag inside Ethiopia”.[13] They also want to recruit fighters inside Ethiopia.

The conflict in the north and the overall domestic instability has weakened the Ethiopian security apparatus. In November 2020, as the tensions mounted with Tigray, Ethiopia had withdrawn a large number of troops operating in Somalia that were not part of AU’s military mission in Somalia (AMISOM).[14] In 2020, even the US pulled out its troops from Somalia which have been re-deployed by the Biden Administration in May this year.

Both these troop withdrawals and the political turmoil in Somalia over the holding of elections in 2021 have worked to the advantage of Al-Shabaab. It is estimated that as of now, Al-Shabaab operates about 7000-12000 fighters and spends nearly US $ 24 million a year on weapons, explosives and drones.[15]

After the attacks in July, the US’ Africa Command has warned that the attack in Ethiopia was not a fluke and more attacks are likely to come.[16] Countries like Kenya and Djibouti are on the radar of Al-Shabaab. 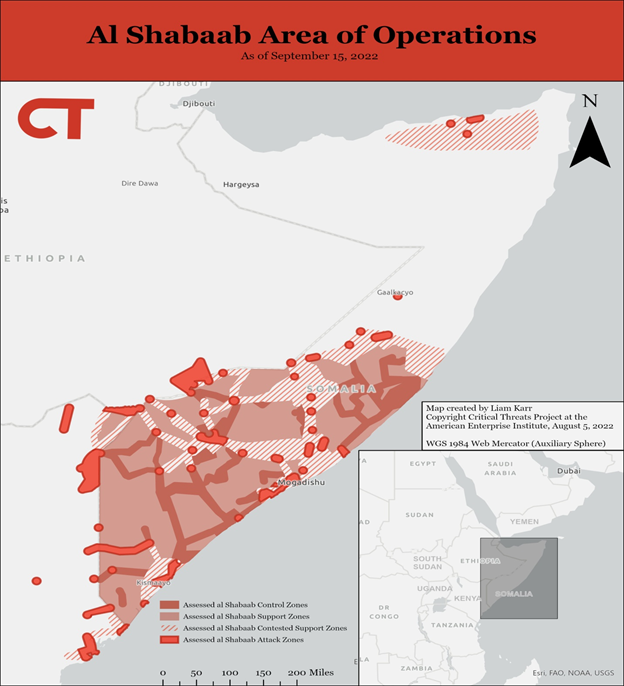 As Islamist terrorists gather strength in Africa, it is imperative to end the raging conflicts in Ethiopia, most important being the one in northern Ethiopia, and stabilize the country. Stable and secure Ethiopia is necessary not only for the well-being of its own citizens but also for the entire Horn of Africa.

*Dr. Sankalp Gurjar is a Research Fellow, Indian Council of World Affairs, New Delhi.
Discalimer: The views are of the author.

[2] A brief background to the crisis: “The TPLF was a guerrilla movement which gained power in Ethiopia in 1991. It dominated the government until 2018, when Mr Abiy [Ahmed] took office following huge demonstrations against its repressive rule. It then retreated to its stronghold of Tigray, from where it launched a rebellion last year following a massive fall-out with Mr Abiy over his reforms.” Sourced from: Farouk Chothia, “Ethiopia civil war: How PM Abiy led fight-back against rebel advance”, BBC News, December 15, 2021. Available at: https://www.bbc.com/news/world-africa-59552888 (Accessed on September 22, 2022)

[11] Geoffrey York, “Tigray war has seen up to half a million dead from violence and starvation, say researchers”, The Globe and Mail, March 15, 2022. Available at: https://www.theglobeandmail.com/world/article-tigray-war-has-seen-up-to-half-a-million-dead-from-violence-and/ (Accessed on September 22, 2022)