Although the Sochi declaration is a comprehensive document covering almost all the aspects of cooperation between two states or regions, it has strong political overtones. The selection of issues and use of strong words like “manipulation” and “financial blackmail”, alluding towards the functioning of the US and European countries set the political tone of the declaration. 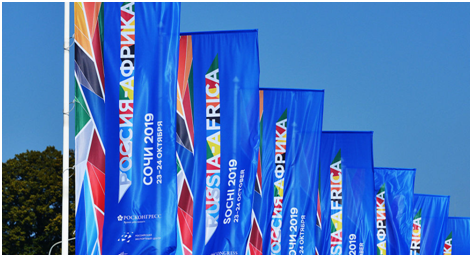 The first Russia-Africa Summit was organised in Sochi, Russia on October 23-24, 2019. It was attended by all 54 countries of Africa, and the representatives included 43 heads of states and governments. However, Russia is not new to Africa and currently it has more than US$ 20 billion worth trade with the continent. It is also one of the largest arms suppliers to the African countries. The increasing intensity of Russia-Africa engagement is evident by the fact that the value of bilateral trade has doubled over the last five years.[1] Chairing the Summit, President Vladimir Putin of Russia, in his inaugural speech, revealed a comprehensive and holistic vision of long term engagement with the continent and emphasised on “ensuring common and indivisible security” as well as creating a “fairer model of the modern world”. President Abdel Fatteh el-Sisi of Egypt, co-Chair of the Summit as well as the current Chairman of the African Union (AU), appreciated Russia’s historical contribution in African anti-colonial freedom struggles. Highlighting the ongoing process of the African integration through African Comprehensive Free Trade Area (AfCFTA), he hoped that Russia could help the continent in industry, energy, agriculture, and ICT sectors; as well as achieving the African target of ending all conflicts by the end of year 2020. The sentiments at the two sides were quite positive and hopeful for the future. However, there are political dimensions to the announcement of the new level of engagement.

Africa, with its enormous natural resources, huge youth bulge and improving security and political stability, is the future economic hub of the world. Due to the colonial legacy and World War II dynamics, Africa has traditionally had close financial, trade and political relations with the United States and the European Union (EU). They also have cumulatively been the largest traders and investors in the continent. However, recently, Asian countries like Japan, South Korea, China, India, Turkey, Saudi Arabia and United Arab Emirates (UAE) have also been engaging in trade, investment and developmental activities in Africa. In fact, Asia seems eager to replace the Western dominance of the continent as China, with its new found wealth, has emerged among one of its largest investors. US, EU, Japan, China and India already have elaborate institutional mechanisms to deepen their partnerships with Africa. Therefore, the announcement of Russia’s institutionalisation of its interaction with the continent is being seen as the arrival of a new actor in the post Cold War second scramble of extra-regional powers for getting hold of the African natural and economic resources. However, the African countries are all aware of the history and consequences of the first scramble for Africa represented by the Berlin Conference of colonial nations dividing Africa among themselves in 1884-85. Therefore, the sovereign African nations are cautiously and strategically welcoming all powers that are interested to invest in their growth and development. This according to the African states will have a balancing effect in Africa.

With renewed US-European economic and political pressures since its accession of Crimea in 2014, Russia has been looking for new avenues of economic and political influence. It has intervened in West Asia through the Syrian route by helping President Bashar al-Assad to hold power and ousting the Islamic State in Iraq and Syria (ISIS) from most of its territory. Russia has recently signed a memorandum of understanding (MoU) with Turkey on northeast Syria that increases its role in establishing peace and stability in the region.[2] The region has immense strategic value for the country as it has vibrant trade relations with Turkey as well as its naval and air bases in Syria.[3] Russia sees its involvement in the region and the MoU with Turkey as means of taming and geographically limiting the Islamist extremists, as well as getting a strong foothold in the Mediterranean Sea route to Africa. Therefore, the Russian institutionalised intensification of its interaction with Africa seems to be a well thought out strategy of interest expansion. The timing of institutionalised ‘Russian arrival’ under President Putin is also complementary to the economic, military and political needs of the African countries and the changing geopolitical dynamics of the world order in transition.

The joint declaration at the end of the event formalised Russia-Africa engagement with the Summit as “supreme body” to be convened once in every three years. Annual foreign minister level meetings of the two sides including the present, former and future presidents of the African Union (AU) will keep a track of the engagement and would brainstorm for new ideas. Although this is the very first summit declaration, the contours and priorities of the engagement are clear. It has laid down broad principles for political, security, trade, economic, legal, scientific, technical, humanitarian, information and environmental cooperation between Russia and the states in Africa. The declaration emphasises on political and security cooperation with a peculiar mention of legal cooperation and environmental protection under separate subheadings. 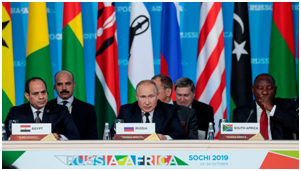 Cooperation on various issues in the United Nations (UN) and using the BRICS platform to strengthen “collective mechanisms of global governance” for a multipolar world system is one of the goals of this comprehensive Russia-Africa interaction. The two sides committed for regular dialogue between their parliaments and other political agencies to forge a common understanding on global political and security issues. Special emphases were given on counter-terrorism, nuclear and space security, together with cooperation on peaceful use of nuclear and space technologies. Weaponisation of space was highlighted as a grave issue for future. Therefore, they called for a weapons free space and emphasised the need for technical cooperation between the Russian and African space agencies.

The two sides committed to strengthen chemical and biological weapon conventions (CWC & BWC) as well as adopting their verification mechanisms. They asserted that any duplication of the conventions through other mechanisms circumventing the UN Security Council is “inadmissible”; and there is a need for an elaborate international convention for “suppression” of the threat of chemical and biological terrorism. They also condemned the tendency of “manipulating requirements of the global non-proliferation regime” to target and pressurise other countries.

The legal cooperation section stresses on adherence to the principle of “sovereign equality”, considering “extraterritorial application of national laws” as interference in internal affairs of other States. It also rules out the practice of “unilateral sanctions” not based on international law.

The cooperation in environmental protection seems addressing more of an African concern as they are one of the most vulnerable with little capacity or green technology for dealing with Climate Change. The declaration addresses the issue of transferring “necessary technologies” to the African countries and calls for “comprehensive replenishment of Green Climate Fund”. However, it also cautions against jeopardising sovereignty of the states receiving the fund.

Along with the usual reiteration of the need of free and fair trade practices based on the rules of the World Trade Organisation (WTO), regional integration within Africa and interregional cooperation between Africa and the Eurasian Economic Union (EEU), the declaration called for working against tendencies of “dictatorship” and “blackmail” in trade and economic relations.

Russia has already been one of the largest arms suppliers to the African countries, especially to the countries in North Africa, which makes it an important strategic player in the continent. Given the traditional strategic rivalry between Russia and the Western countries, the recent intensification of Russia-Africa engagement can be seen as an extension of the same in Africa as well. Therefore, the Russian engagement with the continent may be seen in the larger context of the rise of Asia and the world order in transition.

Russia and China have come closer and have been cooperating on various strategic and economic issues against the West. A linear understanding of this cooperative relationship would predict Russia-China cooperation on the African continent as well. However, given its overwhelming financial presence on the African continent as compared to other BRICS partners, China would most likely prefer bilateralism over joint or multilateral interactions. Similarly, Russia may also like to move independently as it has a substantial share of the military market in the region while China is an emerging competitor. Yet, the two countries may cooperate on global multilateral issues involving Africa. 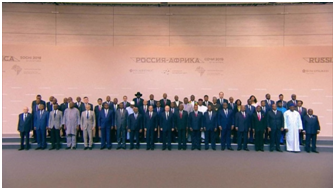 Although, currently, established as well as emerging powers are independently engaging Africa in their own rights, it may not remain so for long. Brazil, Russia, India, China and South Africa through BRICS are already seeking to renegotiate the world economic and political order reflecting the current realities of the world. The grouping may also work well with its New Development Bank (NDB) in Africa as the states in the region seek alternatives to their dependence on US and European finances that come with binding political and economic conditions.

From the Indian perspective, the grand arrival of Russia in Africa can only be a welcome step that may, although unintentionally, help balance the presence of great powers like US, EU and China in the region.

Although the Sochi declaration is a comprehensive document covering almost all the aspects of cooperation between two states or regions, it has strong political overtones. The selection of issues and use of strong words like “manipulation” and “financial blackmail”, alluding towards the functioning of the US and European countries set the political tone of the declaration. No issue of major contention between Russia and the West has been left unattended in the document. The condemnation of “extraterritorial application of national law by States” and “unilateral sanctions” under the subheading of legal cooperation targets the US in the Crimean context, a major issue for Russia. Although set primarily in an economic and developmental context like the Chinese and Indian initiatives in the continent, the Russia-Africa Summit initiative has a higher political tone than the economic. Russia focuses on its niche areas like nuclear power and space. Counter-terrorism has also received a strong emphasis. However, with the holistic implementation of the declaration, there is a strong possibility of increase in the Russian economic and developmental space in Africa. Coincidently, the BRICS agenda corresponds with the spirit of the declaration which explicitly strives for cooperation towards alternative non-coercive arrangement for security, growth and development of developing countries. Russia may effectively use the association in conjugation with its own bilateral agenda in Africa. Conclusively, the international community is looking at the first Russia-Africa Summit as a major attempt to regenerate lost ties and regain status of Russia as a formidable extra-regional power in Africa, like the erstwhile Soviet Union was a major political and military player in the continent.

[3] Russia has its naval base in Tartus, Syria; Moscow’s only such facility outside territory of the erstwhile USSR. It also has its airbases in Hemeimeem and Shayrat in Syria.