Establishment of the Asian Infrastructure Investment Bank (AIIB) has triggered a new debate in Asia and the world. It was established to bring countries together to address Asia’s daunting infrastructure needs. The Bank has completed three years of its operation and its performance suggests that it has started functioning quite effectively.  In this background, the objective of the paper is to analyses genesis and evolution of AIIB. In doing so, the paper also analyzes perspectives from two rising powers from Asia, who are founding members as well as two largest shareholders in the Bank.

The AIIB is a multilateral financial institution headquartered in Beijing. The initiative to establish AIIB was put forward by China in October 2013. A dialogue driven collaborative process was initiated, which took around two years of planning and negotiation, before the AIIB was officially established. This process can be divided into three stages. The first stage was from October 2013 to October 2014, during which the MoU for setting up the AIIB was signed. On October 24, 2014, 21 representatives of prospective founding members, including China and India, agreed to set up the AIIB by signing the MoU.1 The MoU specified that the authorised capital of AIIB is US$ 100 billion. 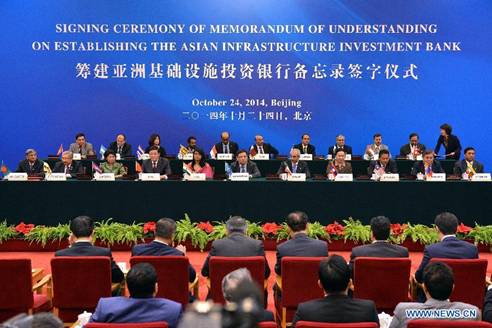 The second stage was from November 2014 to March 2015, during which the AIIB accepted new members. The number of prospective founding members increased to include Indonesia, New Zealand, Saudi Arabia, Tajikistan and Jordan. The third stage was from April 2015 to January 2016, when the AIIB concluded its planning and preparatory work and formally went into operation.2  Representatives from 57 countries participated in the opening ceremony of the AIIB in January 2016.  While 75 per cent of the capital of AIIB is from Asia, some non-Asian regions like Europe, North America, and certain East African and Latin American countries have also joined the bank as members. The Bank has now 97 approved members from Asia and the world.

The voting shares are based on the size of each member country’s economy and not contribution to the Bank’s authorised capital. China’s shareholding is 30.34 per cent and it has retained 26.06 per cent of the voting rights.  AIIB is the first major multilateral development bank where principal contributors are the borrowing members themselves.3

The AIIB’s vision —lean (a small efficient management team and highly skilled staff) clean (an ethical organization with zero tolerance for corruption), and green (an institution that is built on respect for the environment) serves as its main principles.  This has been highlighted by Mr. Jin Liqun, President, AIIB at various occasions. According to the Articles of Agreement of AIIB, its leadership aims to build a rule-based governance of this multilateral financial institution, stressing transparency in managing projects and accountability for the member states.

On May 9, 2019 AIIB reached a new milestone by pricing first global bond to unlock financing for infrastructure. The five-year bond of US$ 2.5 billion demonstrates investors’ commitment to driving socio-economic development in Asia. This inaugural transaction in the debt capital markets attracted over 4.4 billion orders from over 90 investors across the globe representing 27 countries. This demonstrates the increasing acceptability of AIIB in the international financial system.

China: Lessons from history and the emerging debate

China uses two parallel means towards global economic governance. What is known in China as ‘walk with two legs’. One is to jointly establish institutions like AIIB and the other is to push reforms in traditional international organizations, such as the IMF and World Bank.

While addressing the inauguration ceremony of AIIB, Chinese President Xi Jinping on 16 January 2016 noted “The AIIB should function as a multilateral development bank as far as its operating model and principles are concerned. It should learn from the experience and best practices of existing multilateral development banks in terms of governance structure, environment and social benefits policies, procurement policy and debt sustainability. Mutual learning and sharing helps the AIIB function according to high standards.”4 His observation at the inaugural ceremony does not indicate radical changes in the international financial system through AIIB’s mechanism.

It is also noteworthy that China’s approach to multilateralism in general and AIIB in particular has been an issue of debate within China. Some Chinese scholars, especially Bin Gu from the Law School of Beijing Foreign Studies University, stresses that the Chinese pivot to multilateralism is essentially because of lessons from history.5 Multilateralism is considered a key for those global institutions that were successful.  The first, and perhaps the most important, multilateral effort in international economy after World War II was the creation of the Bretton Woods system. The post War international institution designing was in the hands of two world powers, the UK and the USA. Both powers were eager to take lead in creating the economic architecture. The UK negotiating team was led by John M. Keynes, one of the greatest economists of the 20th century, while the US team was led by chief negotiator Harry D. White.6 The UK favoured bilateral approach over multilateralism. Nevertheless, USA’s perspective favouring multilateralism was adopted, which later proved to be a successful approach. The examples are IMF and World Bank.  Some Chinese experts argue that this case demonstrates the success of multilateralism in global financial mechanism.

While learning from this experience, it is evident that Chinese thinking may be quite similar to that of American thinking while establishing multilateral institutions, especially the AIIB.  However, Chinese experience also suggests that importance of bilateralism cannot be ruled out. Bilateral development loans and infrastructure projects, coordinated on a government-to-government basis, still play a significant role in China’s overseas investments. China has created several stand-alone investment mechanisms that have a combined target fund size of almost US $100 billion including the $40 billion Silk Road Fund, the $10 billion China-Africa Development Fund, and the $15 billion China-Russia Regional Development Investment Fund. 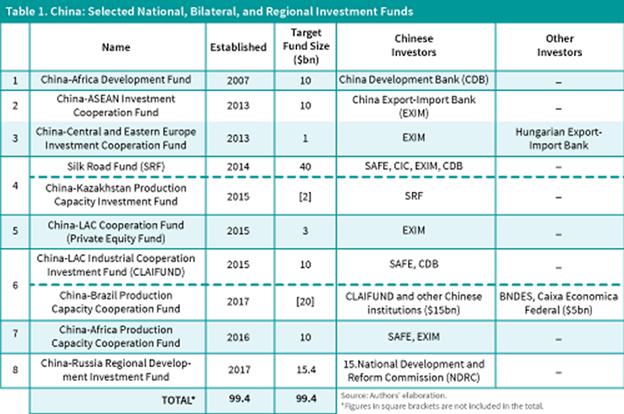 It is evident that AIIB has become one of the central points of debate on China. The Western debate on ‘China led AIIB’ is built up on the realist and power transition theoretical frameworks, which argues that China as a rising and revisionist power will change the international order. China will try to increase its role to take leadership role. 7 Chinese experts have refuted this argument by saying that AIIB aims to serve a complementary role to the existing institutions rather than substituting them.8 From a Chinese perspective, AIIB is important to China as (a) it helps expand foreign trade and investment; (b) Chinese enterprises have a leading position in the infrastructure construction and will gain significant opportunities for development through AIIB; (c) Chinese enterprises can get better protection for its local investment, thus reducing the investment risk; and (d) the AIIB can help enhance China's influence in setting the world economic and financial rules. 9

China was keen about India’s participation and an invitation in this regard was extended by President Xi Jinping during his first meeting with Prime Minister Narendra Modi on the sidelines of BRICS summit in Brazil in July 2014. India chose to be a founder member of AIIB primarily because a dialogue driven collaborative process was initiated before the establishment of AIIB. Asian countries regarded India’s support for AIIB as a major boost to the bank’s formation.

India is second largest shareholder of AIIB with a stake of 8.52 per cent and voting share of 7.5 per cent. Prof. Rathin Roy, Director of the National Institute of Public Finance and Policy notes: “The AIIB is an example of constructive cooperation among emerging economies to increase the space available for infrastructure financing…”10  From Indian perspective, the bank provides rich resource capital base for infrastructure financing, which is good for development in Asia. Indian Government sources highlight that it will help to bridge the infrastructure deficit by playing a complimentary role along with other financial institutions like ADB and IMF and work for good governance.11 Mr. Jin Liqun, President, AIIB has complemented India for playing “a very important role” in the running of the bank.

While inaugurating the Third Annual Meeting of the AIIB in Mumbai in June 2018, Prime Minister Narendra Modi noted:  “It AIIB is poised to play a critical role in Asia… Investments by AIIB in sustainable infrastructure can impact the lives of billions of people.”12

In a relatively short period, AIIB has approved 40 projects in 16 countries with a total financing of US$ 8.03 billion.13 The largest recipient has been India, with nine projects totaling nearly US$ 2 billion.1 The  main thrust of these projects are energy, transportation and also funds in India that work on broader infrastructure projects, including  Smart cities.

Given the important role played by India in the bank, it is recommended that AIIB should consider opening a regional office in India. This will help the functioning of the Bank in more efficient way.

It is also important to note that the main principles such as transparency, accountability, concern for environment, consultative dialogue prior to the establishment of AIIB – all these factors differentiate AIIB from other Chinese plans/initiatives, such as Belt and Road Initiative (BRI). The process adopted by AIIB before its establishment is example of a genuine multilateral sprit. Therefore, India joined AIIB and worked hard for its success.

Some experts argue that when two political heavyweights from Asia are members of AIIB, they might compete for influence within the organisation and it may lead to geopolitical contestations. In such circumstances, consensus building within the institutions could be difficult. If it happens, India should be prepared to deal with the fallouts on the ongoing and future projects.

On the other hand, there are evidences that multilateral organisations provide India and China a relatively neutral playground in which the two countries have gradually begun to accept their stronger commonality of interests. Such understanding at the multilateral level is expected to have a positive impact on the nature of their complex bilateral relations as well.

In sum, it can be said that the mainstream discourse in both China and India highlights the important role of AIIB in overcoming the infrastructure deficit by adhering to good governance and playing a complementary role along with other financial institutions like ADB and IMF, rather than seeking a radical change in the existing international financial system. The bank has worked effectively in its short period of operation and started to bridge Asia’s critical gaps in infrastructure financing on a modest scale. The bank has certainly made a good beginning although expectations are high.

10  As quoted in 50 nations in, AIIB takes shape https://www.thehindu.com/news/national/india-signs-articles-that-determine-each-countrys-share-in-asian-infrastructure-investment-bank/article7368050.ece

12 “PM’s address at the opening ceremony of the Third Annual Meeting of AIIB”, 26 June 2018, https://www.pmindia.gov.in/en/news_updates/pms-address-at-the-opening-ceremony-of-the-third-annual-meeting-of-aiib/