It is not merely the Arab uprising that has put Egypt on a new trajectory. After the coming of President el-Sisi to power in 2013, a new political landscape has emerged in the country that is reshaping its political contours and institutions. The recently held referendum on a constitutional amendment seems to be another step in the same direction.

It is not merely the political and strategic landscape of the West Asia and North Africa region that is in deep flux and heading towards a new strategic and security architecture but every country in the region is on its own trajectory of change. Egypt is no exception to this in the context of its political evolution since the exit of the President Morsi in 2013 and the taking over of the Presidency by Abdel Fattah el-Sisi in 2014. In the past six years since President el-Sisi came to power, the country has witnessed many changes both internally and externally and has made many foes and friends in both diplomatic and strategic spheres.

In the nine years since the Arab uprising, Egyptians have voted nine times. The last occasion was on 19-21 April 2019. This was in a referendum primarily to extend the tenure of the President to six years from the current term of four years along with other provisions. After his second victory in 2018 with 87.8% of total votes cast1, President Abdel Fattah el-Sisi had stated in an interview with the CNBC that he would not seek a third term and would honor the constitution  which people had supported overwhelmingly.2 A campaign to bring the constitutional amendment on extending his tenure began in February this year with the pro-Government majority party, “Support Egypt” and its affiliates in the Parliament. A bill was debated and the constitutional and legislative affairs committee of Parliament approved it on April 16 with 531 votes in favor, 22 against, and one abstention. The majority “Support Egypt” party voted overwhelmingly in favor of the bill. Some not-so-pro-government media houses called it a ‘Pharaoh motion’ and Shame referendum3. It is however relevant to note that the motion received an overwhelming support from the left-leaning opposition party Tajammu as well.4

Within twenty-four hours of the approval of the bill, a national referendum was scheduled for 19-21 April for voters both outside and inside the country. According to the media outlet “Egyptian Chronicles”, 88.33% voted in favor of the amendment and 11.17% voted against the referendum. Out of total 61 million registered voters, 44.3% exercised their votes and this turnout is the highest in Egypt in any electoral exercise held since 2011.5 It is however also alleged that the “No” campaigners had little time to convince the voters as their activists had merely two days to campaign and that too using online sources because of the security crackdown against an open ‘no’campaign. There were also similar allegations of coercive practices on the part of the police forces during the referendum.

The following are the major highlights of the amendments introduced in the constitution and later put to the referendum:

These new laws were passed without much prior debate or discussion in the public sphere because many main opposition leaders (largely Islamists) are in jail, the media freedom is restricted and social media is under constant watch by cyber authority. Nevertheless, these new laws were criticised by some non-Islamist opposition members such as Mr. Al-Hariri, a left-leaning politician who said that the amendment could have a catastrophic impact on the future politics of Egypt.9At the same time, there are many who termed this exercise a wise move in the right direction due to the emerging new politics in the country. Mr. Salah Hasbullah, the official spokesperson of the Egyptian parliament said that constitution was not a sacrosanct document and every era had its own necessity. He said that past constitution was drafted in a hurry and same was true for the constitution under President Morsi. It is worth recalling here that the constitution under President Morsi was discussed and  passed  within  a  hundred  days  and   the drafting committee was dominated by Islamists who were generally undemocratic and non-accommodative of dissenters. 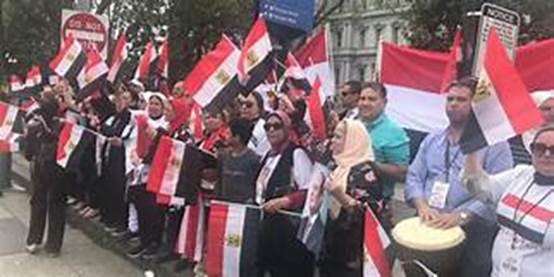 President el-Sisi consolidates himself both internally and externally

Perhaps it is the unstable polity of the region as a whole that provides added justification for these changes in the Egyptian constitution. President el-Sisi has taken these measures on the grounds of keeping Egypt safe from terrorists. National security and economic prosperity have been his two major political planks since coming to power in 2013. Developments in Libya, Syria and in the contiguous region have reconciled many to the status quo with a preference for a secure Egypt rather than a resurgent Egypt without any direction. The President’s support base has consolidated, as his supporters believe that he has not allowed Egypt to suffer the fate of its neighboring countries. The security situation has improved in Sinai, which not so long ago was a hub of all shades of terror groups and had witnessed many attacks. President el-Sisi has also been able to rein in his main political opponent, Muslim Brotherhood (MBH). Almost all prominent members of the MBH are in jail and their political activities have been banned in the name of national security or social instability. The move contemplated by the US, to declare the MBH a terrorist organization has reinforced these measures. On the economic front, the news is less sanguine and the currency has lost more than fifty percent of its value in recent years. Many mega projects are dependent on external financial support, particularly from Saudi Arabia and UAE.

Egypt has also invested in its external relationships with positive results. One rarely comes across any criticism by the international community of human right violations or large scale imprisonment of opposition figures in the country. Only a week before the referendum, President el-Sisi met his United States (US) counterpart President Donald Trump in the White House who said, “We have never had a better relationship between Egypt and the US than we are  having  just now”.10 According to the Israeli Daily, Yediot Ahronoth as reported by the Arabic, Rail Youm, Israeli Prime Minister Netanyahu and President Trump have now decided to assign the responsibility of steering through the “Deal of the Century”11 to President el-Sisi instead to Crown Prince Mohammad Bin Suleiman of Saudi Arabia due to growing opposition in the US State Department against the latter.12While this may well be an exaggeration, the general point of strong US-Egypt and Saudi-Egypt relations is well taken.

Similarly, el-Sisi concluded several defence agreements with Russia, the latest one being the purchase of 20 Sukhoi SU-35 fighter jets worth US $ 2 billion, despite the unhappiness shown by the US. Regionally El-Sisi has been active in diplomatic efforts to contain the conflict in Libya while at the same not disguising a preference for Colonel Hifter who visited Egypt recently amidst a fresh offensive in Tripoli.13

He, similarly, has been active vis-à-vis Europe and hosted the first ever Arab-Europe Summit on the refugee crisis in February 2019. This was the first occasion that brought Arab and European heads of state together in such numbers to discuss the issues of illegal immigration and terrorism.14. He also participated in the Arab League Summit in Tunis and again being the current president of the African Union (AU), President el-Sisi chaired the meeting of AU leaders on April 15, 2019, to discuss the political crisis in Sudan.15 President el-Sisi is also trying to carve out an independent strategic space for the country including from the Gulf Cooperation Council (GCC) nations which had come to Egypt’s rescue in his early days of the rule. This became more evident when el-Sisi recently decided to withdraw from the much-talked-about Arab Islamic NATO and refused to send an Egyptian delegation to its Summit in Riyadh held on 14 April, 2019.16 He has also ensured that Egypt does not get sucked into a sectarian war of the region as the withdrawal decision evidently came after a tripartite meeting of 23 March, 2019 between President el-Sisi, the King of Jordan and the Prime Minister of Iraq in Cairo.

There is an unmistakable trend towards President el-Sisi’s continued rule, and at the same time his diplomatic, political and military success at regional and global level cannot be ignored as he has not allowed the country to descend into near crisis situations as in the case of other countries in the region. President el-Sisi’s moves have constitutional legitimacy but it is also worth mentioning here that the current crisis in Sudan and Algeria is largely an outcome of desire of the incumbent rulers to continue in power for long periods of time.

2Egypt president Al-Sisi he will not seek the third term as a leader, CNBC, Accessed on? (Please check the link below)

4 Gamal Essam El-din, Towards the Referendum, Al-Ahram Weekly Available at , 2019

9Gamal Essam El-din, Towards the Referendum, Al-Ahram Weekly Available at http://weekly.ahram.org.eg/News/26999.aspx, Accessed May 3, 2019

13Libyan Express, An English Daily, Available at: https://www.libyanexpress.com/libyas-haftar-meets-with-egypts-el-sisi-as-war-rages-on-in-tripoli/  Accessed May  2 , 2019

14 Egypt Today, An English Daily Available at:  http://www.egypttoday.com/Article/2/65110/Sharm-el-Sheikh-hosts-1st-Arab-European-summit,Accessed May 03, 2019