Sri Lanka is debating the constitutional validity of conducting parliamentary elections  with the Parliament is dissolved and the new Parliament unable to  meet within the recommended time frame due to the conditions principally arising out of  the global pandemic.

Sri Lanka is debating the constitutional validity of conducting parliamentary elections as the older Parliament is dissolved and the new Parliament cannot meet on a recommended time frame due to the conditions mainly enforced by the global pandemic.The initial announcement by the Election Commission (EC) of Sri Lanka to have Parliament elections on 20th June 2020 and its subsequent submission to the  Supreme Court (SC) that the elections cannot be held under the current situation is a set back to the President’s decision to have a new Parliament elected amidst the pandemic.  The Supreme Court (SC) of Sri Lanka will now decide on the matter, as fundamental rights petitions were filed in SC challenging the decision of the EC to hold elections on 20th June as well as the decision of the President of Sri Lanka not to reconvene the dissolved Parliament.

The Parliament of Sri Lanka was dissolved by the President Gotabaya Rajapaksa, on 2 March 2020 to pave the way for parliamentary elections. According to the 19th amendment to the Constitution, the President can dissolve the Parliament after four and half years of its term. The last Parliamentary elections were held on 17th August 2015.  Elections were earlier scheduled for 25 April 2020 but postponed on account of the pandemic and later the EC announced 20th June 2020 as the election date. The announcement by the Election Commission was not received well by the opposition parties who demanded the reconvening of Parliament, by powers vested on the President by Article 70(7) of the Constitution[1]. The article says, “if at any time after the dissolution of Parliament, the President is satisfied that an emergency has arisen of such a nature that an earlier meeting of Parliament is necessary, he may by Proclamation summon the Parliament”[2].Sri Lankan opposition parties blamed the President of Sri Lanka, for taking an intransigent position on the way forward and the President of Sri Lanka blamed the opposition for ‘resorting to narrow political agenda when the government is striving to safeguard public health, social security and welfare’[3].

The constitutional validity of conducting the election amidst the health crisis was questioned by the opposition and the civil society of Sri Lanka. The arguments are as follows: according to the Constitution of Sri Lanka, the Parliament should meet on a date not later than three months after the dissolution. This means the Parliament of Sri Lanka should be convened latest by 2 June 2020, which seems difficult under present circumstances. Therefore, the constitutional option that is available for the President is to re-summon the Parliament due to the on-going health emergency by cancelling the proclamation that dissolved Parliament on 2nd March 2020[4]. The opposition parties also emphasised that they would extend full cooperation to the Government in the Parliament in its efforts at handling the health crisis.

The Sri Lanka Sri Lanka Podujana Peramuna (SLPP), on the other hand, argued that ‘three months’ limit is attached to the presidential proclamation issued under Article 70(5) (a) of the constitution. But the Election Commission of Sri Lanka under section 24 of the Parliamentary Election Act of 1981 can decide on the election date. For instance, April 25 was the initial date set to conduct the elections but the EC changed that to June 20, due to the emergence of the pandemic. Therefore, the President cannot reconvene the dissolved parliament[5].At the same time, the opposition did not question the dissolution of Parliament within one month of its dissolution after 2nd March 2020, therefore, the petitions are time-barred[6]. Regarding the powers the president has to use the finances, the SLPP argues that he has the power under Article 150 (3), to draw money under consolidated fund during the dissolution of Parliament.

Meanwhile, in a setback to the President’s decision to have elections as early as possible, the EC has informed the SC that the elections cannot be held on 20th June.  According to the EC,it had set this date expecting relative normalcy with curfew to be lifted by the end of May. But in the present conditions, the EC argued, with23 districts under curfew, due to the health crisis it would take more than nine weeks to prepare for the election subject to the health authorities clearance to go ahead with the election[7]. The EC also blamed the President’s office for not taking expert opinion from the SC on the conduct of elections, before the dissolution of the Parliament. Another issue raised by the EC at the SC was regarding the nominations for Parliamentary Elections. The EC argued that the nominations accepted for parliamentary elections on March 17-19 were invalid as both days are declared later as public holidays[8].

The decision by the EC has not gone down well with the SLPP, as it argued that the decision by the President is constitutional and it cannot be questioned.  The SLPP as a party is trying to consolidate the gains achieved during the presidential elections, by winning a majority of seats in new Parliamentary[9]. The 15th Parliament of Sri Lanka (1 September2015 to 1 March 2020) was dominated by the opposition the United National Party (UNP).

The SLPP’s, dominance in Parliament is expected to bring several political and economic policy changes, through constitutional amendments and reversing various decisions taken by the previous National Unity Government in both the economic and political realms. These are about an executive presidency, devolution, the extent of liberalisation of the economy, investments and minority rights. The situation is in favour of the SLPP as the party has touched the right chords with the majority Sinhala community, in recent years. Therefore, having a majority in the 16th Parliament of Sri Lanka is an utmost priority for the SLPP. Delay in elections might also weaken its alliance with the SLFP, as it will give enough time for new alliances to form. An opposition which can only seldom unite also adds to SLPP’s strength. The fissures in the UNP were evident before the parliamentary election nominations in March 2020.  Sajit Premadasa- the main face of the UNP in the last presidential elections had submitted his nomination as the leader of the newly formed Samagi Jana Balawegaya (SJB) party. The UNP split into two and the other opposition parties are not united in forming a coalition to win the next parliamentary elections. The SLPP argues that only the Parliament can cancel or annul the election nominations. Therefore, the opposition wants to reconvene Parliament to file fresh nominations[10]. 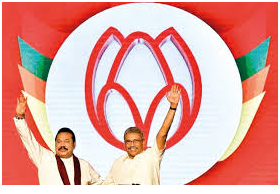 The seven opposition parties of Sri Lanka such as UNP, Samagi Jana Balawegaya (United People’s Front) led by Sajit Premadasa, TNA, Sri Lanka Muslim Congress (SLMC), All Ceylon Makkal Congress (ACMC), Tamil Progressive Alliance (TPA) and Jathika Hela Urumaya (JHU) appealed to the President to re-summon the dissolved parliament. The re-summoning of Parliament, the opposition parties argued, will help in two fronts- one, in resolving urgent governance issues that emerged because of the health crisis, and second, it will help in effectively utilising monies appropriated from the consolidated fund[11].

Arguments and counter-arguments indicate that the space for political manoeuvring in Sri Lanka is shrinking even during the health crisis. The opposition parties boycotted the meeting called by Prime Minister Mahinda Rajapaksa to discuss COVID-19. The meeting was not attended by the UNP, JVP and the United People’s Alliance leader Sajit Premadasa. After the initial call to boycott the meeting, the TNA chose to attend the meeting and emphasised that the meeting called by the Prime Minister was not a substitute for reconvening of parliament and urged the PM to address the national question i.e, the sharing of power between the centre and the provinces under the 13th Amendment framework[12].

Sri Lanka is facing a constitutional crisis mainly arising from  the global pandemic as it came in between the dissolution of the Parliament and the election. The stalemate will have to be resolved by the SC. The SLPP led government wants an early election that can strengthen its position in new Parliament. Though the EC submission at the SC is a setback for time being, the President’s office will try to make a strong case in favour of conducting an election in a month or two, rather than convening a dissolved Parliament. It has already decided to lift the Island-wide curfew from 26th May 2020(curfew will be in force only from 10 pm to 4 am) and will also try to back up its case with the help of health authorities. The opposition and the civil society are questioning the decision to have an election on humanitarian and legal grounds amidst the pandemic. In the present scenario, only the SC of Sri Lanka can resolve the constitutional crisis either by deciding about reconvening of Parliament or by deciding on a date for the parliamentary election.

*Dr. Samatha Mallempati is a Research Fellow at Indian Council of World Affairs.
Disclaimer : The views expressed are personal.

[5]BandaraKelm, “No constitutional provision whatsoever to re-summon old Parliament –GL”, 2 May 2020, http://www.dailymirror.lk/hard-talk/No-constitutional-provision-whatsoever-to-re-summon-old-Parliament-GL/334-187619. Accessed on May 3, 2020

[6] Colombo Telegraph, Opposition “Betrayed” Parliament By Pledging Not To Overthrow Govt: Counsel For PB Jayasundera”, 21 May 2020, https://www.colombotelegraph.com/index.php/opposition-betrayed-parliament-by-pledging-not-to-overthrow-govt-counsel-for-pb-jayasundera/. Accessed on May 22, 2020.

[7] Colombo Telegraph, “Election Commission Drops Bombshell In Court: Poll Be Delayed Till August”, 20 May 2020, https://www.colombotelegraph.com/index.php/election-commission-drops-bombshell-in-court-poll-be-delayed-till-august/. Accessed on May 21, 2020.

[9]The 15th Parliament of Sri Lanka Was led by former Prime Minister (PM) Ranil Wickramasinghe and the Tamil National Alliance (TNA), led by R. Sampanthan, who won 106 and 16 seats respectively, in a 225-member parliament.