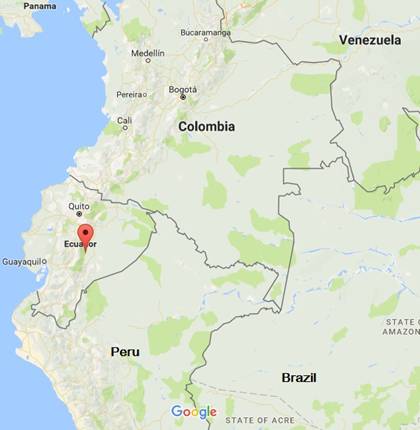 Mr. Lenin Moreno’s recent electoral victory in the Ecuadorean presidential election held on 02 April, 2017 is seen as a key to continue and expand the “Citizens’ Revolution” under outgoing President Rafael Correa and remain a part of the pink tide that has swept Latin American politics in the past two decades. The 63-year old former Vice President (2007-2013) under President Correa defeated the rightist candidate Mr. Guillermo Lasso by a narrow margin of 51.16 percent to 48.8 percent with 99.65 percent of ballots counted. This ensuing result was a follow up of the first round elections held on 19 February 2017. In the first round of elections, Mr. Moreno got 39.36 percent of the vote against his nearest rival Mr. Lasso’s 28.09 percent. Although he was more than 10 percent ahead of his opponent, Mr. Moreno was just short of the 40 percent threshold required to avoid a ‘run-off’.1 The elections in Ecuador went into a ‘run-off’ after neither of the candidates secured a majority vote to win the poll outright. This run-off was the second time that Ecuadorian election were decided by a second round voting after the 2006 election in which President Correa won in a similar manner. Mr. Moreno, the newly elected president will be officially inaugurated on 24 May 2017.

After overcoming the challenge of Mr. Lasso, a wealthy banker, Mr. Moreno of the Socialist Party, PAIS Allianza (Patriotic Alliance, AP) has reinforced President Correa’s “Citizens’ Revolution.” It is apparent that President Correa played a key role in Mr. Moreno’s victory. President Correa was seen calling voters during the campaign to choose the candidate who will continue his pro-poor policies, while the opposition candidate pledged to bring major cuts to the nation’s troubled economy in an attempt to revive the same.

Mr. Moreno’s election campaign was dominated by a number of key issues. The campaign focussed on the country’s worsening economic situation, following the world economic crisis, and need to resettle the people after the devastating earthquakes in Esmeralda and Manabi provinces. Largely focussing on domestic needs, Mr. Moreno’s campaign identified rights of the disabled Ecuadorians and its challenges to be the focus of the new Presidency. It also focussed on increasing employment opportunities and to provide all Ecuadoreans the chance to go for higher education. He also pledged to increase the amount of the human development bond and reduce the value added tax (VAT) These points have seemingly resonated with the Ecuadorian voters.

In opposition, Mr. Lasso, pledged to reduce the role of the public economy which was an essential policy of President Correa and undertake a massive shift to the private sector, arguing that “free markets” are the key to increasing the country’s economic capability. He announced a pro-business agenda aimed at attracting foreign investment, reducing taxes and generating more jobs, privatise healthcare and education, presenting a neo-liberal policy of tax cuts for the rich so as to bring down the country’s budget deficit. He also pledged to restore the “independence” of the central bank, which would play an instrumental role so as to better deal with situation of collapse of the banking sector witnessed in the late 1990s. He called for transparency in foreign and economic policies with regard to engagements with China and proposed to evict the Wikileaks founder Julian Assange from the country’s embassy in London.

Counter to the neoliberal underpinnings of Mr. Lasso campaign, Mr. Moreno’s vow to pursue economic policies initiated by President Correa that centred on the agenda of lifting millions out of poverty could have swayed voters to his side.

In contrast, Mr. Lasso, was finance minister under President Jamil Mahuad in 1999 and the latter’s policies led to economic crisis, dollarization of the economy, and the migration of almost three millions Ecuadorians in search of job between 1998 and 2002.2 Mr. Lasso was reportedly accused of benefiting from the economic crisis as his financial assets rapidly increased by 3000 percent between 1999 and 2000, moved millions of dollars to Panama and has actively avoided paying taxes.3 All these factors were the reason behind a referendum (called by President Correa) along with the 2017 Presidential election in Ecuador that politicians or public officials having companies or accounts in tax havens will have one year to bring offshore capital back to Ecuador or they will be removed from office. The referendum was approved by 54.76 percent against 45.24 percent of the total votes counted. Mr. Lasso’s victory would have eliminated social programmes and promoted neo-liberal economic policies.

On the personal front, the public image of Mr. Moreno as a paraplegic and being one of the world’s few disabled national leaders may also have influenced the voters decision. He will be the first paraplegic head of state, having used a wheelchair after being shot in a robbery in 1998. As Vice President, he significantly increased the federal budget for disabled Ecuadoreans. For his relentless support for handicapped people, he was nominated for the 2012 Nobel Peace Prize. Mr. Moreno is also known for his hard work that earned him approval ratings of more than 90 percent when he left the vice-presidency in 2013 to take up a United Nations post as a Special Envoy on Disability and Accessibility.

President Correa’s three terms have been characterised by populist social welfare programmes such as increasing subsidies on education and healthcare, increased agricultural subsidies, constructing or improving roads and creating more jobs. His government also seized companies owned by members of an influential family involved in a banking scandal in the 1990s. Although Ecuador has been a close ally of Venezuela, President Correa avoided the excessive promotion of President Chavez’s so-called ‘Bolivarian revolution’. The government was more pragmatic, the military was less involved in politics, the economy was more diverse and political schisms were less violent. The significant developments during the three term rule of Mr. Correa presidency are: impact on reducing poverty from 37.6 percent to 22.5 percent during 2006 and 2014.5 Unemployment has been reduced from 4.8 percent in 2005 to 3.8 percent in 2014. Finance for education facilities also increased to 2.12 percent of GDP for higher education—the figure on expenditure on education is much higher than many OECD countries.6 President Correa has invested more than US$16 billion in healthcare facilities during the last ten  years  which  is  more than 8 times investment between 2000 and 2006, estimated  at  US$2  billion.7  So  much  so  that, President Correa and his administration is dubbed as a “neo-developer,” “a 21st Century Socialism,” “a Catholic supporter of Liberation Theology,” “a left-wing nationalist.”

The economic problems, corruption and the legacy of Correaism, and social justice programmes, were the focal point of the election campaigns. Government revenue of around US$25 billion a year when oil prices were high between 2006 and 2014, has now decreased to less than US$11 billion due to falling price of oil from mid-2014 onwards. This has resulted in growing proximity to China. Beijing’s US$2.2 billion investment on hydro-power project and about US$7 billion for the construction of oil refinery near the port of Manta on the Pacific Ocean are underway. On top of this, after President Chavez, Venezuela’s dramatically collapsing economy has pulled down Ecuador’s exports.

However, there are contrasting reports of international monetary and regulatory bodies regarding Ecuador. According to the Economic Commission for Latin America and the Caribbean (ECLAC), Ecuador experienced a negative growth in 2016 of -2.3 percent and it forecasts for 2017 at 0.5 percent.8 However, as per the International Monetary Fund’s (IMF) World Economic Outlook Report (2016),9 Ecuador’s GDP is predicted to shrink at 2.7 in 2017 as oil prices remain low.

In either eventuality, at least in the short run means Mr. Moreno would have to navigate through the difficulties arising out of the steep fall in the price of oil, the main export product, and strengthening of the dollar which would have negative effects on already declining government revenues. This means it would be a tough challenge for continuing support by increasing subsidies on education, social security and healthcare, improving infrastructure, including an ambitious housing plan and the social programme, which were Mr. Moreno’s election campaign promises.

Mr. Moreno had indicated in the election campaign that he would continue the current policies of President Correa. However, the state of the economy demands changes. Since there is growing economic stagnation, Mr. Moreno needs to talk to business leaders and social movements for the efficiency of public spending and boost competitiveness without depending on external debt, particularly from China. In the past decade, Ecuador strengthened its ties with China, becoming one of the main recipients of Chinese investment and assistnce in Latin America. According to the China-Latin America Finance Database of the Inter-American Dialogue, a Washington-based think tank, Ecuador is the third recipient of China’s assistance after Venezuela and Brazil with a a figure of US$17.4bn.10 . Nevertheless, on the positive side, Ecuador has had years of strong economic growth under President Correa with its people being wealthier than most Latin American countries. In view of the contingent global economic realities, the new government has seemingly charted a route to overcome the economic hardship facing the country by following the road map charted by President Correa. It is to be seen whether it would work or not.

4 President’s Correa’s time in office before the implementation of the new constitution did not count as a term under that constitution.

5 The report is available at https://www.worldbank.org/en/country/ecuador/overview