Former President of South Korea, Park Geun-hye was impeached by the National Assembly on 9 December 2016. It was followed by her removal from the office on 10 March 2017, by the Constitutional Court of Korea, marking the first time in history that an incumbent president has been ousted by impeachment.1 Main Charges against her included corruption, influence peddling, and dereliction of duty. The 19th South Korean presidential election is scheduled to be held on 9 May 2017, as according to the law in South Korea, the election should take place within 60 days of the office being vacant. The president is directly elected for a single five-year term by plurality vote. At present, there are five presidential candidates contesting the election. Table 1 shows names of those five presidential candidates with their political alignment.

Moon of the Democratic Party of Korea garnered 38-42.4 percent of support, maintaining a considerable lead  over  his four  other  main  rivals,  according  to  three  pollsters – Realmeter, Gallup Korea and Hankook Research.2 His party also has most seats in parliament. Since last week, the main race which was believed to be between Moon Jae-in and Ahn Cheol-soo has shifted to a situation in which Moon enjoys a comfortable lead over Ahn and Hong Joon-pyo. Moon, candidate for the Democratic Party, is maintaining a solid support base of 40%3, while Ahn, candidate for moderate People’s Party, and Hong, candidate for the conservative Korea Liberty Party, were vying for second place amid volatility among conservative voters. While Hong jumped to the second spot by gaining 8.4 percentage points from the mid-April survey; Ahn Choel-soo of the center-left People's Party, saw his rating drop by 13.7 percentage points over the same period.4 Sim Sang-jeung of the far-left Justice Party came in fourth with 7.3 percent, while Yoo Seong-min of the conservative Bareun Party posted 4.9 percent.5 Yoo Seong-min and the other 32 lawmakers, who supported the parliamentary impeachment of former President Park Geun-hye had left Park former ruling party to set up a new party known as Bareun Party.6 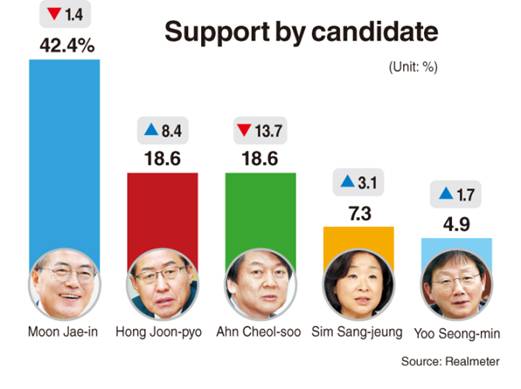 In present circumstances, any elected President will have to take office without the traditional two months transition period, which means he/she cannot afford a delay in the appointment of key administration officials that require parliamentary endorsement.7 Because of this reason, candidates are making announcement of the names of their potential nominees for posts like prime minister, key cabinet members and senior presidential staffs in advance.

One of the important features of this Presidential election has been early voting, which took place on 04-05 May 2017, allowing voters to cast their  ballots  in  advance  anywhere  in the country. Early voting is separate from absentee voting, and is designed to boost voter turnout rates. Also according to the National Election Commission (NEC), the overseas voting had a record high turnout since the voting system was first introduced in 2012 at 75.3 percent, higher than the 71.1 percent for the presidential election that year, reflecting the overseas Koreans' high interest in the election following the presidential corruption scandal.8 The voting was for Korean nationals staying overseas, including those with permanent residency in other countries and those temporarily out of Korea for study, work or travel.

One of the most important issues for this presidential election is the deployment of the Terminal High Altitude Air Defence (THAAD) system in the country. South Korea's progressive parties are campaigning to review this decision. It has been alleged that former President Park Geun-hye did not allow enough public discussion on the subject and quite suddenly decided to deploy THAAD in early-2016, after North Korea's missile and nuclear tests. Moon says he is committed to the US-Korea alliance as the foundation of Seoul’s diplomacy but has expressed caution about the deployment of THAAD. He wanted to postpone deploying the U.S. advance anti-missile system until the new president takes office and can evaluate its benefits and drawbacks. He believed that he could use the threat of THAAD deployment to pressure China to restrain North Korea. Ahn strongly supports THAAD, as do the conservative candidates. And they all object to China’s coercive tactics to try to pressure South Korea to cancel the missile defense system deployment. Ahn also said that there was no need to worry about Trump's remark as the US had agreed to pay for THAAD under Status of Forces Agreement. The problem is that THAAD has been deployed. Will Moon reverse this decision, if elected?

Democratic party candidate Moon Jae-in said that if elected, he would phase in mutual inter-Korean arms control and encourage "simultaneous action" from North Korea, the US and other countries to achieve "a comprehensive package" of ending North Korea's Nuclear programme, denuclearising and signing a peace agreement.9 Moon's message hinted at an increased role for South Korea instead of China, with Seoul taking the initiative in Korean Peninsula denuclearisation discussions. His message appeared to project him as a contender, who is 'strong on national security'.10 Other Conservative candidates prefer the US alliance to pressurise North Korea for denuclearisation. Hong strongly supports the anti-missile system. And he said if he is elected he will “immediately start discussions with the U.S. on the re-deployment of nuclear weapons” in South Korea.

The former Saenuri party, which is now Liberty Korea Party, is “security conservative,”11 preferring to take a strong stance over appeasement on North Korean provocations. Former President Park had advocated a stronger South Korean military contribution to the U.S.–South Korea alliance, particularly in response to recent North Korean attacks and provocations. Conservatives have traditionally endorsed maintaining   alliance   and   cooperation with the U.S. Following the impeachment of the discredited conservative Park, the two leading presidential contenders in public opinion polls are liberal-leaning advocates for increased dialogue and engagement with North Korea. However the frontrunner, the Democratic Party’s Moon Jae-in, stressed his support for sanctions against Pyongyang and the strong military alliance with the United States, and said any differences with U.S. policy could be handled through constructive diplomatic channels. However, Moon has not hesitated to use anti-U.S. rhetoric, and remains open to fostering relations with a China that increasingly seeks to limit U.S.-ROK alliance cooperation.

Hong is pitching himself as a “strongman” who can contend with “nationalist” leaders from the U.S., Japan, Russia and China. He wants to bring U.S. tactical nuclear weapons to South Korean soil and create a special marine force to better respond to North Korea.

Another contender, Ahn Cheol-soo with the People’s Party, said he would engage in shuttle diplomacy with the U.S. and China to give the Korean people a greater voice to peacefully resolve the longstanding division at the heart of this crisis.

Welfare in South Korea has recently become a political flashpoint and is likely to be a key election issue. Former Park administration originally ran on the attractive platform of expanding "welfare without raising taxes”. However, later on, increase in the other taxes angered people. Moon supports expanding welfare by increasing corporate tax, specifically on cash piles of the chaebol – large family-run conglomerates, which have been central to South Korea’s “economic miracle,” but are increasingly blamed for holding back the economy.12 Liberty Korea Party's new leadership has flip- flopped its position on this. The say that “excessive welfare would make people indolent,” but then also added that expanding welfare is impossible without increasing taxes.

LGBT groups have been more actively involved in this election than ever before. The candidates’ positions on LGBT rights can be judged by whether or not they plan to enact anti-discrimination legislation, which would include provisions banning discrimination against an individual on the basis of his or her sexual identity or orientation. On 20 April 2017, the South Korean chapter of Amnesty International released responses on eight human rights issues from candidates Moon Jae-in, Ahn Cheol-soo, Hong Joon-pyo, Sim Sang-jung, and Yoo Seong-min.15 Of the five, only left-wing Justice Party candidate Shim stated her intention to “pursue” anti-discrimination legislation. Conservative Liberty Korea Party candidate Hong said he “could not” pursue it,  while  the  other three candidates avoided giving a clear answer. Liberal Democratic Party of Korea candidate Moon and moderate People’s Party candidate Ahn, who are respectively polling first and second in the race, expressed their opposition to discrimination but stressed the need for a societal consensus.

* The Author is a Research Fellow at Indian Council of World Affairs, Sapru House, New Delhi.