The Mekong River Issues and the Peril to Regional Stability

The Mekong River supports and sustains economies and livelihoods of over sixty million people living in the sub-region. The river and its tributaries ensure growth and stability for the whole sub-region making it of strategic significance. The paper studies how this region is emerging as a critical geopolitical space caused by excessive damming which is altering the river’s course and impacting the regional biodiversity, livelihoods, and the future of its food security.

The Physiography and Significance of the Mekong River

Map One: The Mekong River System 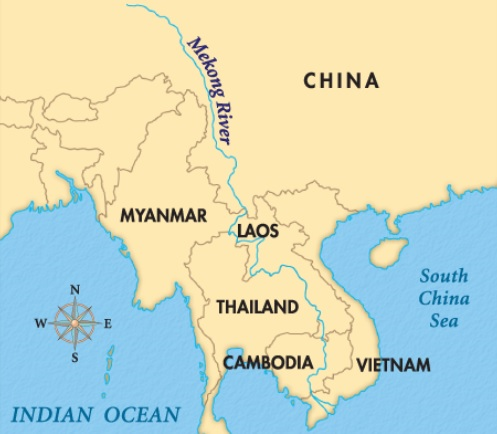 As indicated in Map One, the Mekong River’s originates in the Jifu Mountains high in the Tibetan Plateau in Southern Quinhai province where it is called the Lancang River. The Mekong river which is replenished by melting snow from the Himalayas is the eighth largest river in terms of mean annual discharge and being approximately 4909 km long it is the tenth longest river in the world and seventh largest in Asia. From its source on the Qinghai-Tibet plateau it stretches 4,800 km connecting China, Myanmar, Thailand, Laos, Cambodia, and Vietnam.[i] On entering Myanmar it becomes part of the Lower Mekong Basin and passes through Thailand, Laos, Cambodia, and Vietnam before flowing into the South China Sea. The Lower Mekong basin covers a total area of 630,000 km2 and is home to approximately 65 million people, including a rich and diverse variety of flora and fauna. The Lower Mekong Region which is known as ‘Asia’s rice bowl’ depends on the Mekong for its water and food security since the river and its tributaries helps regulate surface and ground water, and transfers rich sediments necessary for the restoration of soil fertility.[ii]

The nutrients carried by the Mekong river is also critical for the survival of a huge variety of fish species on which tens of millions of people depend on for their livelihood. The region’s freshwater catch is one of the world’s largest inland fishery, accounting for a quarter of the global supplies. However, the hydroelectric dams built and being planned on the Mekong along with the impact of climate change in the years to come will have consequences on the fisheries, agriculture, bio-diversity, and the lives of the people dependent on the river.  The excessive damming by altering the flow and the nutrients in the water – essential for maintaining the soil fertility and ecological balance – is becoming a major threat for the food security of the population living in the lower riparian states.[iii]

Excessive Damming and the Emerging Imbalance

Cambodia, Lao PDR, Thailand, and Vietnam, are members of the Mekong River Commission [MRC], which was established in 1995 through an agreement to help promote and facilitate  cooperation for a sustainable management and development of water resources in the Lower Mekong River Basin. The MRC’s State of Basin Report [SOBR] published every five years provides key findings and recommended priority actions. According to the recent third series of the SOBR completed and published in 2019, the reservoir developments in the Mekong basin has altered the flow of the river which is causing a substantial decrease in the sediment deposits into the flood plains. The reports highlighted the need to manage in order to minimise the long term consequences on the environment that includes the loss of wetlands and riverine habitats and calls for urgent actions to protect remaining assets before they are lost. The excessive damming in the Mekong River is changing the character of the water and is impacting the ecological balance and fisheries in particular. The 2019 SOBR has therefore, reinforced the “..need to build upon existing cooperation through regional planning and joint projects, investment and monitoring…”. The MRC through the establishment of the Joint Environment Monitoring for Mekong Mainstream Hydropower Projects [JEM] has been monitoring the transboundary impacts of mainstream hydropower projects. “..The JEM programme undertakes joint monitoring of key environmental indicators to support impact assessments of Mekong mainstream hydropower projects on five main monitoring disciplines: hydrology and hydraulics, sediment and geomorphology, water quality, aquatic ecology, and fish and fisheries…”[iv]. However, despite these positive initiatives undertaken by the MRC, these have made little difference to the damming in the Mekong that has continued to increase in number. According to a former Cambodian energy minister Pou Sothirak, this is because “..the MRC has no enforcing mechanism to force policymakers to agree on whether to build or not to build a dam on the mainstream…”[v]

In March 2021, the government of Thailand, Vietnam, and Cambodia called for “..greater support from the US and the ASEAN regional bloc to address urgent environmental threats to the Mekong River…” they also emphasised “..the need for improved water data sharing by all countries on the river, including China…”. The MRC Secretariat, Vietnam, and Thailand “..have voiced strong concerns over the impacts of large hydropower dams upstream in China and Laos on the river’s flood pulse downstream…”. While China has denied the impact on the water level in the lower riparian states caused by its excessive damming it has agreed on water level data sharing with the commission.[vi]

China since the time of Mao Zedong has been undertaking massive engineering projects such as dams for accelerating its development and growth. Further, in order to reduce its greenhouse gas emissions, China has been increasing its hydroelectric capacity by undertaking large number of dams with at least 86,000 being built over the past six decades. While passing through China, the Mekong River crosses through Yunnan, where there is a drop in elevation of 1,780 metres, this has a potential for 25,000 Megawatt [MW] in hydroelectric energy. “..The province’s annual theoretical hydropower potential is estimated at 900 billion kWh, of which around 400 billion kWh is thought to be potentially exploitable, accounting for more than 20 per cent of China’s total…”[vii] Map Two indicates the major dams on the Mekong River, the dams highlighted in green are completed and operational, the yellow ones are under construction and the dams that are being planned are marked in brown colour. 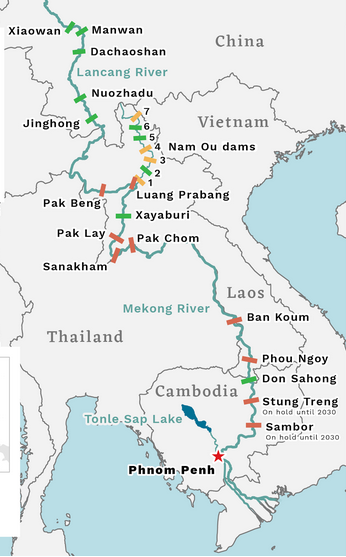 As indicated in Map Two the Manwan dam built on the Lancang River in the Yunnan province was completed in 1995. With a capacity of 1,570 MW it was the first large dam to be built in the Yunnan province and since then five more dams have been completed.[viii] The northernmost of the dams in Yunnan is the 990 MW Wunonglong Dam, in Weixi Lisu Autonomous County. The 300 meters long and more than 100 meter high Wunonglong Dam  is the eleventh dam to be completed on China’s portion of the Upper Mekong and is one of a further 14 being planned or built there.[ix]

Laos and Cambodia are also highly dependent on hydropower to meet their growing energy demand. In Cambodia 48 percent of its domestic power production comes from hydropower. With reference to Map Two, the Don Sahong Dam near the Laos-Cambodia borders constructed by China’s Sino hydro Corporation is one of the Mekong mainstream dams built close to the ecologically crucial Tonle Sap Lake in Cambodia. The change in the flow of the Mekong along with the effect of climate change that has altered the weather patterns resulting in shorter rainy season and longer dry season is resulting in the loss of sediment. This is impacting fish migration patterns, which is creating imbalances in the ecosystem of Tonle Sap.[x] Sinohydro in a joint venture with the Lao State electricity corporation and the Électricité du Laos [EDL]is also building seven cascading dams in the Ou River as known locally as the Nam Ou River in Lao PDR and is a major tributary of the Mekong. Referring to Map Two, the Nam Ou 1 hydropower dam with a total capacity of 180 MW inaugurated in November 2019 is one of the seven dams being built.[xi] Experts have warned that when the other farther upstream dams in the Ou River start their operation it will change the flow of the river causing displacement of thousands of people and also lead to huge losses in unique fish species. “..The dams on the Ou River and others across the Mekong basin are part of China’s Belt and Road Initiative...there are more than 370 dams planned along the Mekong’s 2,700 mile course from China to the Mekong countries of Southeast Asia…”[xii]

The Mekong River supports  a remarkable biodiversity that sustains rich networks of life that include a large population of Southeast Asians that live and depend on it. Owing to the volatile energy prices in international markets and concerns over carbon emissions, there has been a growing demand for cheap and renewable energy in order to meet increasing power demands in the region. The excessive damming being witnessed in the Mekong River is altering the flow of the water and along with it impacting fisheries, agriculture, and biodiversity. China being an upper riparian state through its excessive damming over the decades has been able to assert its dominance over the flow and control of the river. This is becoming a concern for the lower Mekong states owing to the  irreparable damage to the eco-system on which the livelihood of the region depends. In its quest for securing its energy and water requirements, China continues to downplay the ecological and environmental implications. Further, climate change is also increasingly having an effect; visible in the current dangerously low levels on the Mekong River which affects downstream countries, especially Vietnam and Cambodia.

The alteration and control on the flow of the water through excessive damming being undertaken by the upper riparian states is effecting the river’s natural characteristics and the surrounding habitat, with the impact being felt more in the lower Mekong countries. The ongoing activism for securing energy and water resources by some countries in the region is causing imbalances that threatens the way of life and livelihood of the other Mekong countries. The escalation in the complexities of challenges confronting the Mekong region is creating further imbalances whereby external powers such as the US, and China are competing for power and influence. Through the Lancang-Mekong Cooperation Leader’s Meeting and the Mekong-US Partnership Ministerial Meeting, initiatives are being chartered out to build a new course for the river through cooperation. This form of partnership would be fundamental in building strategic trust between the five Mekong countries and the two powers and in meeting challenges in the future in the face of rising insecurity related to water resources and the accompanying ecosystem confronting the Mekong region.

[iii]“Requiem for a River: Can one of the World’s Great Waterways Survive its Development”, The Economist, https://www.economist.com/news/essays/21689225-can-one-world-s-great-waterways-survive-its-development, Accessed on April 5, 2021.

[viii]“Requiem for a River: Can one of the World’s Great Waterways Survive its Development”, The Economist, https://www.economist.com/news/essays/21689225-can-one-world-s-great-waterways-survive-its-development, Accessed on April 5, 2021.

[xii]Shibani Mahtani, “How China is choking the Mekong: A River Journey Reveals displaced villages and a ruined Ecosystem”, The Washington Post, January 28, 2020, https://www.washingtonpost.com/graphics/2020/world/the-mekong-river-basin-under-threat/, Accessed on April 5, 2021.