Politics in the Times of Pandemic: With PM Suga Gone, What’s Next for Japan?

In a surprising turn of events, Japanese Prime Minister (PM) Yoshihide Suga on September 3, 2021, announced that he will not run in the upcoming election of the President of the Liberal Democratic Party (LDP) scheduled for later this month. As his term as the leader of the party expires by the end of this month, the announcement effectively means that he is resigning from the position of the PM of Japan. Considering LDP’s majority in the Japanese parliament (Diet), whoever wins the party leadership contest becomes the PM. The official campaigning for the LDP President election will start on September 17 and the votes will be counted on September 29.

PM Suga assumed power a year ago following the sudden resignation of Shinzo Abe on health grounds. Previously, he served as Chief Cabinet Secretary for eight years under PM Abe.  Unlike most of his peers in Japanese politics, Suga worked his way up from a very humble background and became the first PM not belonging to an LDP faction or a political dynasty. His image as a hard-working self-made politician helped to start his term with a massive public approval rating of over 70 percent, the highest for a new Japanese administration in a decade.[1]

However, since early January, the government’s approval rating started plummeting on account of its slow response to the COVID-19 pandemic and Suga’s self-righteous attitude that avoided directly addressing the public anxiety and dissatisfaction.[2] The COVID vaccination, which was the administration’s trump card in its fight against the pandemic was not only delayed by few months but also failed to achieve the target that the government set when it was rolled out.  Suga has also been accused of prioritising the economy over curbing the pandemic. For instance, promotion of domestic tourism campaign last year, encouraging Japanese people to travel to help boost the economy by providing government subsidy came under severe public criticism.[3]

Despite Japan being in a state of national emergency imposed due to the fourth wave of COVID-19 in April, 2021 and ignoring strong domestic opposition, PM Suga decided to hold the postponed 2020 Tokyo Olympics and Paralympics. He promoted the hosting of the Olympics as a “proof of humanity's victory over the coronavirus", hoping that successful games could turn the public approval rating around. It looked like a perfect plan for Suga- leverage the Olympics to elevate the public standing of the administration, then dissolve the Diets’ lower house, win the general election, and secure LDP leadership even without an election. While many praised Suga for the successful hosting of the Games, the Japanese public saw it otherwise, as the country witnessed an all-time high COVID-19 infection in August.  The approval rating of the Suga Cabinet fell to record low reaching below 30 per cent, a red line in Japanese politics.[4]

The growing unpopularity of the Cabinet, together with the disastrous electoral performance of LDP in several gubernatorial and Mayoral elections, under Suga’s watch have caused serious misgivings about his ability to win the upcoming lower house election, which will be held later in the autumn, especially among young and new legislators. Furthermore, Suga’s desperate last-minute attempt early this month to secure his position by reshuffling party executives and dissolving the lower house before the party leadership election, not only faced firm resistance but also paved the way for a strong movement in the LDP to replace Suga with a new ‘face of the party’ before going for the lower house elections.

Until early this month, with the anticipation that Suga is seeking reelection, the leadership election was expected to become a two-way contest between the PM and former Foreign Minister Fumio Kishida, who lost to Suga in the 2020 LDP Presidential election.  Former internal affairs minister Sanae Takaichi also expressed her intention to contest with the hope of becoming the first woman PM of Japan.

The sudden departure of Suga from the scene, however, has created a new scenario with more candidates throwing their hat in the leadership contest and new political equations are at play. The field is getting crowded with the prospect candidature of Taro Kono, the current Minister of Administrative Reforms, and Seiko Noda, former Minister of Internal Affairs and Communications.

The 62-year-old, Kishida, who is considered to be a moderate politician announced his candidature in late August. He also heads the 5th largest LDP faction with a membership of 46legislators. Having served as the longest Japanese Foreign Minister under PM Abe, Kishida is highly experienced in foreign policy and until recently headed the powerful LDP’s policy council.

The second candidate who formally announced candidature is Sanae Takaichi former internal minister and the former head of the LDP policy council. Having no affiliation with any LDP faction, Takaichi was not considered a serious candidate until she received the backing of the former PM Abe following the departure of PM Suga from the election scene.[5]  Like Abe, Takaichi is a hardcore conservative, who prioritises public order over civil liberties, restore the status of the emperor in Japanese public life, and a strong emphasis on making Japan a ‘normal country’ through the revision of the constitution. With the support of Abe, she could upset the political equations.

The current minister of administrative reform and minister in charge of vaccination Taro Kono also announced his candidature. In the latest public polls, Minister Kono is leading ahead of  Kishida and way ahead of Takaichi and Noda.[6] Kono, an ambitious and social media savvy politician is quite popular with the younger generation. He is known for his direct and effective communication, unlike PM Suga. Kono’s prospects of being elected have increased as he is now being supported by the departing Suga. He also belongs to the second-largest LDP faction headed by Deputy PM Taro Aso. He will be the likely choice of the many young and new Diet members of LDP because Kono’s large public appeal will increase the prospects of their victory in the upcoming lower house election. Former defence minister Shigeru Ishiba, who leads second behind Kono in the latest public polls has also been regarded as a potential candidate. However, he declined to contest and offered his support to Kono.

Another potential candidate is the sixty-year-old Seiko Noda, who is currently serving 9th term as a lawmaker and previously held many ministerial positions including minister of communication in the Abe administration. She has already indicated her intention to contest the election. Noda is known for her criticism of Abe when he was the PM to the extent of challenging him for the party presidency in 2015. With the number of contestants increases and Noda having no support of any faction, there is a possibility that she will fail to gather the backing of twenty LDP Diet members, criteria to be accepted as a candidate.

The factional politics of the LDP is an important factor in determining the outcome of the party leadership election.[7] Though they are not as significant as they were in shaping the course of Japanese politics before the political reforms in the mid-1990s, factions still hold considerable sway when it comes to selection of personnels in the party and the government. While it is true that PM Suga who does not belong to any faction managed to get elected, however, he had the support of the four major factions.

At present, LDP has also seven factions, out of which five are major and two minors. Three heavyweights of LDP former Prime Minister Abe, Deputy Prime Minister Taro Aso and LDP General Secretary Toshihiro Nikai hold the mantle of the largest three LDP factions (See figure: 1). The main focus of the contenders would be getting the support of the factions. However, in the event of a tough competition, the wrangling for the votes of the unaligned 59 Diet members of the party will also come into play.

The outcome of the LDP leadership election so far has been less dependent on the public popularity of the candidate and more on the political equations within the inner circles of LDP. For instance, in the last election, PM Suga was not the popular candidate. However, the generational change in LDP with young and new lawmakers, who would prefer a more popular ‘face of the party’ to face the election, which is a month away could potentially offset the traditional pattern of being loyal to faction leaders.[8] The establishment of a cross-faction parliamentary federation consisting of young lawmakers, who were elected three times or less, is an indication of the blurring of faction loyalty in LDP.[9] 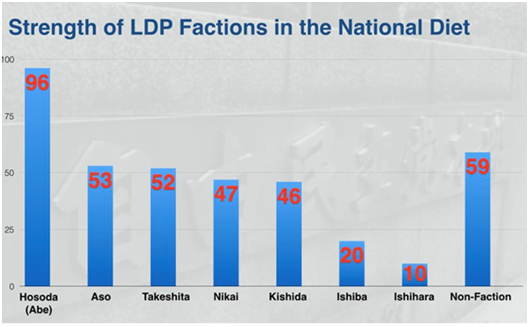 With a weakened opposition, the LDP would still be favoured to retain power in the Diet after the general election. This means that whoever wins the party leadership contest will likely remain the country’s PM.Currently, the LDP in the lower house of the Diet holds a two-thirds majority together with its junior coalition partner Komeito. Going into the lower house election with a new leader replacing the unpopular Suga, the LDP is expected to limit the loss caused by anti-incumbency and it will be able to form a government with a clear majority if not a supermajority as it enjoys now.

The big question is whether or not PM Suga’sdeparture will be the beginning of yet another cycle of political instability that witnessed between 2006 and 2012 with six revolving door PMs.  Given that the challenges before Japan are enormous- at home with the pandemic still raging and the economy in shatters and, abroad with strategic challenges posed by an assertive China and the latter’s intensified rivalry with the US, whosoever will become the new leader would require enormous political skill and genius to survive as the PM.

[7] Factions are important feature of Japanese political parties in particular LDP. Factions are institutionalized subgroup within the party.  The faction leaders offer their followers services without which the followers would find it difficult, if not impossible, to survive politically. Leaders provide funds for the day-to-day operation of Diet members' offices and staff as well as financial support during expensive election campaigns. Even though factions lost their traditional significance in the Japanese politics following electoral reforms in the mid-1990s, still remain influential. See, Kōji Nakakita, translated by Stephen Johnson. (2020), The Liberal Democratic Party of Japan: The Realities of ‘Power’, London: Routledge.