An Overview on Canadian Election

Prime Minister (PM) Justine Trudeau’s Liberal Party has emerged as the single largest party, but it has not won the majority he had hoped for when he called for snap elections in August 2021. In the 338-seat parliament, a party needs 170 seats to claim a majority. According to the preliminary results stated by Election Canada[i], the composition of the new parliament will not be much different from the one elected in 2019. The Liberal Party has won 159 seats, the Conservative Party (led by Erin O’Toole) has won 119 seats, the Bloc Québécois (lead by Yves-François Blanchet) has won 33 seats and the National Democrats Party (NDP) (led by Jagmeet Singh) has won 25 seats.[ii] 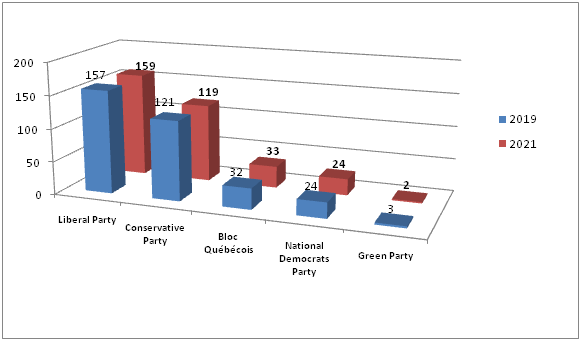 Issues in the Election

The election campaign of nearly all the parties was one without a concrete plan of action as the elections were announced suddenly, which gave parties just four weeks to campaign. The main issue discussed has been the need to conduct elections in the middle of a pandemic. The main election plank for the Liberal Party was to highlight the achievements of the Trudeau government in handling the Covid-19 pandemic. On the other hand Erin O’Toole and Jagmeet Singh both referred to the election call as unnecessary and unwise during a public health emergency.

The response to the Covid-19 pandemic- As Canada’s vaccination drive reaches more and more people, the Liberal party spoke about a federal vaccine mandate[iii], under which the federal government will soon require all public servants to be vaccinated. However, it was not made clear what would happen to workers who could not be vaccinated for various reasons-medical and religious. In response, the Liberal government stated that it would consider alternative measures, such as testing and screening, making its position similar to the one proposed by the Conservatives. Conservative leader O’Toole has said that his party would not impose mandatory vaccines on public servants or travellers. While supporting vaccination, he had suggested that mandatory rapid testing; masking and other preventive measures could manage the risk posed by unvaccinated Canadians.

Healthcare–Healthcare remains a perennial concern and the pandemic helped highlight how quickly health system could become strained, as well as the need for better access to mental health services. The Liberals, the Conservatives and the NDP made healthcare a core of the campaign outreach. The Liberals have pledged to spend CAD$ 3.2billion to help provinces and territories hire 7,500 new family doctors, nurses and nurse practitioners and CAD$ 400 million over four years to improve access to virtual care.  They will also invest CAD $6 billion, in addition to CAD $4 billion already committed—to support the elimination of health system waitlists. Along with CAD $ 10 billion to Health Canada for sexual and reproductive health care and a similar amount will be spent on a youth-led grassroots organisation that look respond to sexual and reproductive rights of young people.[iv] Conservatives had stated that they would increase healthcare funding by CAD$ 60 billion over the ten years and invest $325 million over the next three years to create 1,000 residential drug treatment beds and build 50 recovery community centres across the country.[v] The Conservative Party had laid emphasis on mental healthcare pledging to create a national mental health plan that would ask the provinces to dedicate a portion of healthcare funding to mental-health initiatives. The NDP wanted to implement a national pharma-care program and improving access to virtual care.

Economic recovery- Post Covid-19 economic recovery was an important campaign issue for the parties. According to the Bank of Canada, GDP contracted by about 1 percent in the second quarter, however, the Bank expects the economy to strengthen as the year ends, although the fourth wave of Covid-19 infections and ongoing supply bottlenecks could weigh on the recovery.[vi]While the housing sector had boomed in the first quarter of the year, helping the economic rebound, decrease in manufacturing, construction and retail trade as a result of Covid-19 restrictions have meant that recovery has been slow. Supply chain bottlenecks have weighed on manufacturing and exports. The increase in household expenditure has further added to the problems of the common citizen. While jobs have rebounded, the recovery of the labour market is still uneven. The Liberals’ focus will be on job creation, which would include child care, worker retraining and a push toward a low-carbon economy. The Conservative party had fought this election primarily with a focus on economic issues. The Conservatives wanted to create jobs by providing tax credits and increasing investment for businesses. The NDP jobs plan was to create more jobs that would be geared towards a low carbon economy in such sectors as energy-efficiency retrofitting, renewable energy and public transit.

-The Environment and climate change became a campaign issue as all three parties spoke about a cleaner and greener future for Canada. An important aspect in this sector has been creating jobs in low carbon economy with a focus on renewable energy development. The Liberals have pledged to reduce Canada’s greenhouse gas emissions to 40-45 percent below 2005 levels by 2030.Their new climate promise is the proposed requirement that at least 50 percent of passenger-vehicle sales would be electric by 2030, supported by an extension of E-vehicles purchase rebates and increased spending on charging infrastructure. Other new commitments include an expanded strategy to make buildings more energy efficient, a net-zero power grid by 2035 and new tax credits to subsidise renewable electricity generation and clean technologies. The Conservatives wanted Canada to achieve the target of a 30 percent reduction in emissions by 2030 from 2005 levels. They also wanted a 20 percent reduction in the carbon intensity of transportation fuels sold domestically, up from 13 percent under the federal Low Carbon Fuel Standard. The New Democrats are calling for Canada’s emissions-reduction commitment to be raised to 50 percent by 2030.The NDP was also more pointed than the other parties about favouring domestic industries when making climate investments.

The New Government in Canada

PM Trudeau returns to power as the leader of a minority government. The Liberal Party would need the support of the NDP to successfully legislate on some of their campaign promises. This support may be easy to get on issues such as affordable childcare, affordable housing, focus on a low carbon economy etc. However, they may have to negotiate on other issues such as the NDP’s pledge to tax the ‘ultra-rich’ to ensure that billionaires contribute their fair share to the economy through increased taxes. The NDP has raised issues for the indigenous communities, such as access to clean drinking water. It is also likely that the NDP will push the liberal government to take concrete action on the national pharma-care plan.

Covid-19 will continue to dominate the economic plans as the government continues to push for people to get vaccinated and increase testing centres. The Liberal Party’s mandatory vaccination programme for federal employees has been objected to by the various workers unions. It will likely revert to the position of the Conservative Party of increased testing of unvaccinated workers while urging them to get vaccinated.

With little change in the composition of the parliament, it would be safe to say that the programmes started by the Liberal government earlier in the year would continue.

PM Trudeau had earlier announced investment of CAD$10 billion in new major infrastructure initiatives to create jobs and economic growth. The Canada Infrastructure Bank’s (CIB) Growth Plan will help Canadians get back to work and is expected to create approximately 60,000 jobs across the country.[vii]The plan to support economic recovery through immigration is also going to continue. To compensate for the shortfall and ensure that Canada has the workers it needs to fill crucial labour market gaps and remain competitive on the world stage, the 2021 to 2023 plans for the labour market aims to continue welcoming immigrants at a rate of about 1 percent of the population of Canada.[viii]

The Liberal party is also returning to address some challenges including the impact of climate change, housing affordability, opioid abuse and economic issues like deficit and debt management while continuing to manage the Covid-19 pandemic.

PM Trudeau has to also deal with possible challenge to his leadership from within the party given that the elections were called to win a majority. Across the country, a number of Liberal candidates were forced to compete in tightly contested races. The next election will need be held by 2025, unless the Liberal government calls another snap elections or the government is defeated in a non-confidence motion. The support for another election is limited among the people. Keeping in mind this sentiment it seems unlikely that the opposition parties would trigger another election especially in the pandemic. If the Liberals were to call another early election, it would likely devastate the party, perhaps in a manner similar to what happened to the Progressive Conservative Party in 1993 when it went from a majority to holding two seats.

The Indian diaspora in Canada is much sought after as a support base as they tend to be high- income professionals and educated. As a group, the people of Indian origin, especially the Sikh diaspora in Canada have become a powerful group and prominent voice in the domestic political space. The 2019 elections sent 20 Indo-Canadians to the parliament, of which four members became part of the cabinet. As per the preliminary results, seventeen Indo-Canadians have been elected to the new parliament, including NDP leader Jagmeet Singh and all three Indo-Canadian ministers in the dissolved Cabinet - Harjit Sajjan, Anita Anand and Bardish Chagger.

[i]As people have also opted for mail in ballots as a result of Covid precautions, Election Canada will wait before it declares the final results.

[ii]Election Canada, https://enr.elections.ca/National.aspx?lang=e, Accessed on 22 September 2021. The general election will remain unofficial until the Chief Electoral Officer has confirmed the name of the Member of Parliament elected in each constituency. The expected date for the return of the election writs is Monday, October 11, 2021.