With President Joe Biden assuming office as the 46th President of the United States (US), US-China relations entered a new phase. It is one of the most challenging foreign policy relationship that President Biden inherited from his predecessor. In his first press conference, President Biden said: “This is a battle between the utility of democracies in the 21st century and autocracies.” He further said: “We have got to prove democracy works.” To a large extent, the issues of friction have remained the same as those under Donald Trump.

Against this background the paper analyzes the developments in the US-China relations under the Biden administration.

While addressing the Congress, in his first speech to Congress, President Biden assured the maintenance of a strong US military presence in the Indo-Pacific and promised to boost technological development and trade. “China and other countries are closing in fast. We have to develop and dominate the products and technologies of the future.”[i] It may be noted, the day President Biden assumed office, China imposed sanctions on the outgoing Secretary of State Mike Pompeo and other 27 officials for their posture towards China. This was meant to intimidate the new government.[ii]

President Joe Biden and Xi Jinping had the first virtual meeting on 16 November 2021. (Earlier, the leaders had spoken twice.) The meeting lasted for three and a half-hour. The two leaders discussed issues of trade, Taiwan and human rights. Both sides issued separate statements listing their concerns. There was no major outcome of the meeting nor was there any joint statement.[iii] Xi Jinping laid out three principles and four priority areas for the China-US relations.[iv] However, there were no similar statements from the US side.

US-China trade friction marks a highly contested aspect of bilateral relations. While speaking to the United Steelworkers in May 2020, President Biden had said: “I will use tariffs when they are needed, but the difference between me and Trump is that I will have a strategy-a plan –to use those tariffs to win, not just to fake toughness”.[v]

The US new approach to the US-China bilateral trade relationship was articulated by US Trade Representative (USTR) Katherine Tai at the CSIS.[vi] Her remarks at CSIS  indicated that the US is looking forward to assessing and discussing the “Phase One” trade agreement signed under Donald Trump in January 2020, launching a new review process to look at Section 301 tariffs on Chinese exports, to address China’s “state-centred” trade policies and practices, including what USTR deems to be trade-distorting industrial policies and to focus on working with allies and like-minded countries to address issues of mutual concern relating to China, and to shape the rules for fair trade to facilitate “a race to the top” for market economies.[vii] In addition, two meetings have also been held between the trade representative of the US and China but no breakthrough has been achieved so far.[viii]

It may be recalled that on 14 February 2020, the US and China entered into the first phase of the trade agreement, the Economic and Trade Agreement between the US and the People’s Republic of China.[ix] According to the agreement, China agreed to purchase certain US goods and services worth USD 200 billion for two years, starting from 1 January 2020 through 31 December 2021 with 2017 as the baseline year. According to a study by Chad P. Bown of Peterson Institute for International Economics (PIIE), it is evident that China bought none of the items promised 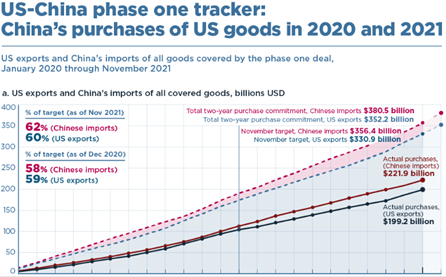 However, irrespective of the trade friction, China is the second-largest trading partner of the US after the European Union (EU). The total trade value between China and the US is USD 682.32 billion from January to November in 2021, a year-on-year increase of 30.2 per cent.[xi] China sells almost four times to the US. [xii] The Ambassador of China to the US has said that the “China-US economic and trade relations are win-win in nature”. He also reiterated that closer economic cooperation between the US-China is not only crucial but also mutually beneficial as the two economies are interdependent.[xiii] .[xiv] As of now, officials from the US have asked for concrete actions from China to purchase US goods and services as under the “Phase One” trade deal.[xv]

Overall, the Biden administration has continued protesting China’s economic policies that led to the starting of the trade war.[xvi] President Biden banned 59 firms for their ties with China’s military or surveillance industry, including Huawei Technology and other telecommunication companies.[xvii] On 16 December 2021, the Biden administration imposed trade restrictions on more than 30 Chinese research institutes and entities over human rights violations and alleged development of technologies, for example, brain-control weapons, that affect US national security.[xviii]

The trade war has further percolated down to the issue of technology and has become the forefront of the US-China frictions. Under Donald Trump, the US had accused China of cyber theft of intellectual property, coerced IP transfers and unfair trade practices. The US had argued that if China could ban Google and Facebook from entering China, similarly the US can ban Huawei and ZTE.[xix] The Trump administration had tightened restrictions on Huawei by cutting its access to the US components and technology.[xx] This made China aware of the US approach. Xi Jinping has reiterated, “Technology innovation has become the main battleground in the global strategic game”. Consequently, this has made the US more conscious and they are scrutinising Chinese technical investment more closely.[xxi] The trend has continued under President Biden. In November, the US Secretary of Commerce Gina Raimondo included eight China-based technology entities to the Entity List “to prevent US’ emerging technologies from being used for the PRC’s quantum computing efforts that support military applications”. Subsequently, the US added 37 more entities to its Entity List to “deter misuse of biotechnology” and other technologies “for military applications and human rights abuses”.[xxii]

Last year President Biden had signed Executive Order 14017 to assess the US vulnerabilities in the critical supply chain. Within six months, the administration came out with a complete comprehensive review of the supply chains for four critical products and established a Supply Chain Disruption Taskforce (SCDTF) to address the challenges arising from the pandemic. An annual report has also been published identifying their vulnerabilities and strategies.[xxiii]

In addition, the America Creating Opportunities for Manufacturing, Pre-Eminence in Technology, and Economic Strength Act of 2022 (the America COMPETES Act of 2022) was passed on 4 February 2022. The Act covers scientific research, economic competitiveness, and funding for the domestic production of semiconductors. It also contained a list of motions on the human rights situation in Xinjiang, a crackdown on democracy in Hong Kong and increasing tensions over Taiwan.[xxiv] The Chinese Foreign Ministry spokesperson Zhao Lijian has criticised the act. He said the content in the bill regarding China has a “Cold-War mentality and zero-sum game mindset”. [xxv]

On Taiwan, President Biden’s views were articulated through his two articles written in 2001 and 2020. In 2001, Joe Biden wrote an article in the Washington Post, “Not so deft on Taiwan”[xxvi]; at this point he was critical of the US support to Taiwan and preferred to maintain strategic ambiguity. Before the US elections, in 2020 he wrote another article for New York-based Chinese-language newspaper World Journal [xxvii], describing his vision towards the Taiwan issue and supporting the US stance towards Taiwan. In one year of his presidency, despite strong resentment from China, President Biden invited Taiwan to the Summit of Democracy.[xxviii] The Taiwanese Vice President Lai Ching-te met the Vice President of the US briefly during the inauguration of new Honduras President Xiomara Castro. It was the first public meeting between the two Vice-Presidents since they took office.[xxix] Until now the Biden administration has provided arms sales to Taiwan twice. First, on 5 August 2021, the Biden administration agreed to a USD 750 million weapons sale to Taiwan. Second, on 8 February 2022, arm sales worth USD 100 million worth of equipment and services to support its air and missile defence systems to Taiwan.

Soon after taking office, President Biden started sending warnings to China against any expansion in East and Southeast Asia. He reiterated that the US position on China’s maritime claims remains the same as the 2016 Arbitral Tribunal’s finding. The US has also rejected aggressive Chinese postures, exploitation of hydrocarbon and fisheries in the South China Sea.[xxx] Periodically, the US has been sending naval and air patrols challenging China's claims of sovereignty over the area and also asserting the freedom of navigation. In the last few years, the US has conducted many Freedom of Navigation Operations (FONOP); one in 2015, three in 2016, four in 2017, six in 2018, eight in 2019, and nine in 2020.[xxxi] President Biden showed no sign of backing down. In the first month in office, he sent two aircraft carrier strike groups for joint operation in the disputed region.[xxxii]

In the virtual meeting with President Biden, Xi Jinping has reiterated that the most important event in international relations in the coming 50 years will be for China and the US to find the right way to get along. On the other hand, after the virtual summit, President Biden said: “Let’s get something straight, we know each other well. We’re not old friends. It’s pure business.” The contradiction in their perception of bilateral relations is evident.

A few developments such as the release of the CFO of Huawei, Meng Wanzhou from jail have taken place. But largely, the technology issue between the two sides remains complex. At the moment, the trajectory of the trade war appears to be uncertain. This year marks the 50th anniversary of Richard M. Nixon’s visit to China and the signing of the Shanghai Communiqué. China is using the occasion to warn the US to refrain from using Taiwan as a “poker chip” and to remind of its commitments made in the Shanghai Communiqué vis-à-vis Taiwan. Two delegations from the US have visited Taiwan. One delegation led by former US Joint Chiefs of Staff Mike Mullen and the second led by Mike Pompeo. In the ongoing Ukraine crisis, US-China relations are becoming tenser. China has criticised the US position on the crisis and the chances are that US-China ties will become more antagonistic.

President Biden and his administration are attempting a nuanced policy on China. They are making efforts to keep all channels of communication in place and the policies under him are becoming more competitive. To sum up, US-China relations are at a critical juncture and the second year of his presidency will be crucial for bilateral relations.

[viii] Jenny Leonard, One Year into his term, Biden finds himself boxed In on China, Bloomberg, 19 January 2022,

[ix] Economic and Trade Agreement Between the Government of the United States of America and the Government of the People’s Republic of China, https://ustr.gov/sites/default/files/files/agreements/phase%20one%20agreement/Economic_And_Trade_Agreement_Between_The_United_States_And_China_Text.pdf