BRICS, a group of five major emerging economies comprising Brazil, Russia, India, China and South Africa is gaining recognition among the major countries of the West Asia North Africa (WANA) region. Saudi Arabia, Turkey and Egypt plan to approach BRICS for official membership while Iran has initiated the preparatory process for joining the grouping. The United Arab Emirates (UAE) has joined the BRICS New Development Bank (NDB)[i]; and Qatar along with the Emirates has been upgraded to the emerging market status aligning them in line with the BRICS countries.[ii]

BRICS membership is perceived as an entry to an elite club that has the potential to revive multilateralism. For the individual countries, the BRICS membership comes with advantages associated with trade and market access, foreign direct investments and an increased bargaining power and voice in international issues.[iii]For BRICS, an expansion means a broader base to engage with other regional associations. The fourteenth BRICS Summit Beijing Declaration supports promoting discussions among the members on the expansion process. It stresses the need to clarify the guiding principles, standards, criteria and procedures for this expansion process through Sherpas’ channel on the basis of full consultation and consensus.[iv] However, the process of expansion will shape up in the due course of time.

Brazil, Russia, India and China accepted South Africa as a member in 2010. More than a decade later, it is faced with membership requests from a number of countries in the WANA region. In 2005, Jim O’Neill placed Egypt, Turkey and Iran on the list of next eleven countries with potential to become biggest economies in the 21st century.[v] The three countries have expressed their interest in joining BRICS while Egypt is a prospective member of the NDB. Also, boosted by the enviable economic performance, the Gulf countries likeSaudi Arabia and UAE are keen to join the grouping. 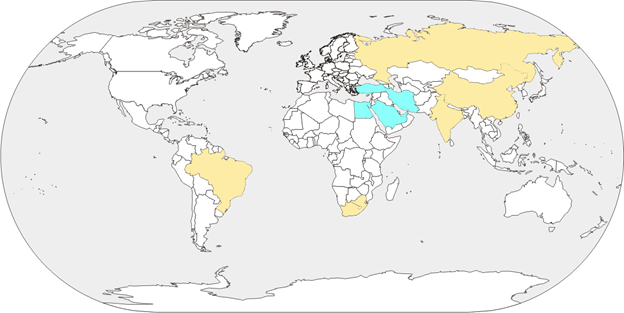 At the 2022 summit, Egyptian President Abdel Fattah El Sis stated that BRICS is a forum whose position is growing day-by-day at the international stage. Iranian President Ebrahim Raisi called on BRICS members to strengthen this global platform for the effective role-playing of independent multilateral institutions in achieving homogeneous development and world peace.[vi]Four years earlier, Turkey expressed interest in energy partnership through BRICS membership; President RecepTayyip Erdogan who was invited to attend the 10th BRICS summit, said that he wished BRICS members would take the necessary steps to let Turkey in the grouping.

BRICS was formed with an objective to capitalise the overarching economic power of the grouping; however, it is evident that the geo-economic dominance has the potential to provide geo-political leverages. The BRICS leaders have been holding consultations on the sidelines of the G20 summits and BRICS Foreign Ministers have been holding standalone meetings on the sidelines of the UNGA.[vii] The 2022 BRICS think tank forum focused on seizing development opportunities, jointly tackling risks and challenges, sustaining the momentum of cooperation, building a community with a shared future for mankind, and making positive contributions to world peace and development.[viii] Egypt and UAE eye BRICS membership majorly in order to pursue their geo-economic interests while for Turkey, Iran and Saudi Arabia geo-political concerns supersede the financial gains.

BRICS membership is important for Egypt; it has abundance of natural and human resources and aims to achieve economic growth through foreign investments. Post the uprising, the Egyptian pound has depreciated, investment and tourism have waned and forced the country to use its cash reserves and cut state subsidies. Cairo also looks at BRICS membership for economic stability even though its current level of trade with the BRICS countries is not enough. Despite the bilateral partnerships between Egypt and the BRICS countries, the volume of Egyptian exports does not exceed 0.12 per cent, 0.3 per cent of the bloc's total and agricultural imports respectively.

Recently, a number of countries including Saudi Arabia, UAE and China have expressed willingness to invest in Egyptian energy sector. However, Egypt’s foreign reserves have dropped by 19 per cent due to the economic crisis caused by Covid-19 and the Russia-Ukraine war and Cairo looks at gaining economic stability through the cushion provided by the Contingent Reserve Arrangement (CRA) of the NDB. CRA is a framework for supporting countries facing short-term balance of payments pressures.

Similarly for UAE, the BRICS membership signifies an economic partnership providing an opportunity to engage with the member countries with new fervor. It eyes China and India as market destinations in South Asia; while considering proactive Russia as an alternative to the western dominance in the region. For BRICS, Emirati wealth can be used to boost the NDB’s credit rating and overall reputation. The state-owned Abu Dhabi Investment Authority ranks as the fourth-largest sovereign wealth fund in the world in 2021. BRICS finds the UAE’s emphasis on and support of an innovative entrepreneurial culture, conducive to the NDB’s aim to establish projects faster than other multilateral development Banks.[ix]

For the NATO member Turkey, BRICS membership provides an opportunity to expand its international organisational network in non-western zones. The European Union’s (EU) reluctance to incorporate Turkey has become irksome; while EU’s General Affairs Council stated in 2018 that Turkey has been moving further away from the European Union,[x] the EUhas provided candidate status to Ukraine, Moldova and Georgia in 2022. The global economic crisis has alsoreminded Turkey of the significance of the alternative regional frameworks. Through BRICS membership, Turkey hopes to gain an access to more influence in global affairs.[xi]Moreover, BRICS membership is the natural progression for Turkey engaged in re-orienting its foreign policy and asserting its dominance in the region.

Reeling under the economic sanctions, Iran perceives BRICS membership as an opportunity to attract investments and strengthen the weak economy as well as getting a seat in a non-western grouping. Tehran has warm ties with all the members of the grouping and intends to make use of the BRICS international standing for its geo-political maneuvers including revival of the JCPOA. Due to its unique geographical position, short and inexpensive transportation, transit networks and energy reserves, Iran can be a stable and reliable partner for the grouping. Iran’s BRICS membership can also be seen as its next step towards east after joining SCO in 2021.

Lastly, for Saudi Arabia BRICS membership is a loud and clear signal of shaky ties with the US. The membership will bring definite gains for the Kingdom as Riyadh aims to diversify its economy. Joining BRICS reflects the weakening of unwavering support and trust in the US and warming of ties with the Russia, China and India. US President Joe Biden’s visit to the Saudi Arabia has somewhat dampened the anti-US sentiments that emerged after Biden declared it a pariah state; however, the attempts to revive the JCPOA have cast a doubt over US-Saudi differences on regional issues. Also, BRICS will provide the Kingdom with voice at the international forums dealing with various issues of global concern.

The establishment of the NDB with equal voting rights[xii] is a mark of success for the BRICS even though it has been criticised at other levels. Jim O’Neill, former Chairman of Chatham House and formerly associated with the Goldman Sachs, who coined the abbreviation BRICS in 2001, has noted the bloc’s low trade integration, unequal growth and little assertiveness. He also underlines the lack of coordination concerning priority issues, and a missed opportunity to form strategic cooperation agreements by the grouping.[xiii]However, the grouping represents 41 per cent of the world population, 29.3 per cent of the total land surface, 24 per cent of the global GDP and 16 per cent of the global trade and continues to have immense economic potential.

Egypt and UAE are keen to join the grouping majorly for the economic opportunities however Turkey, Iran and Saudi Arabia are eager to join BRICS for the political significance and symbolisms. Interest of major countries of WANA in joining BRICS is another sign of waning US’ dominance in the region while Russia is asserting its presence and China is quietly engaging in economic activities in the region. Also, it points towards the fading trust of the major actors in the regional organisations like Arab League. The 22-member organisation has been criticised for its lack of influence in regional conflicts in Yemen and Syria, and failing to honour its commitments to Palestine. Nevertheless, the major regional actors’ entry to BRICS would make it a grouping of the world’s largest energy producers and consumers outside the US. How the debate on BRICS expansion, the expansion criteria, the expansion guidelines pans out among the members remains to be seen. At a time of geo-political ferment and sharpening US-China rivalry, it is also important that a non western grouping is not given an anti-West colour.

[xiii]Amar Diwakar, BRICS 20 years on: A success or failure?, TRT World, available at https://www.trtworld.com/magazine/brics-20-years-on-a-success-or-failure-52410accessed on September 06, 2022