Philippines managing its Relations with China since July 2016

Three years have lapsed since the Permanent Court of Arbitration at The Hague announced its judgement against China’s historic claims over the islands and reefs in the South China Sea (SCS). Ever since the ruling, Philippines and China have taken great care to ensure that no further escalation of the issue occurs which could cause disrupt their bilateral relations. While the United States (US) continues to remain a major partner for the Philippines, the period has also saw Manila beginning to engage with Beijing with the hope of achieving an amicable solution over their dispute in the SCS. The Scarborough Shoal as indicated in Figure One continues to remain one of the major flash points in the ongoing China-Philippines dispute in the SCS.

Figure One: The Scarborough Shoal in the South China Sea West Philippines Sea 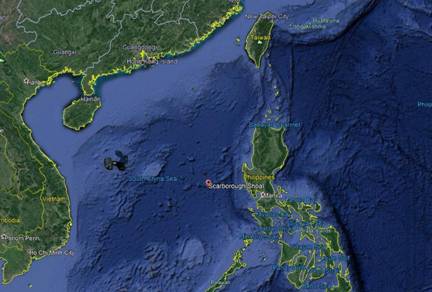 The Scarborough Shoal covering an area of 150 km square and about 198 km from Philippines’s Subic Bay in its Western coast, has been classified as part of a group of islands under the Republic of the Philippines under the Philippine Baselines Law of 2009 (Republic Act 9522).1 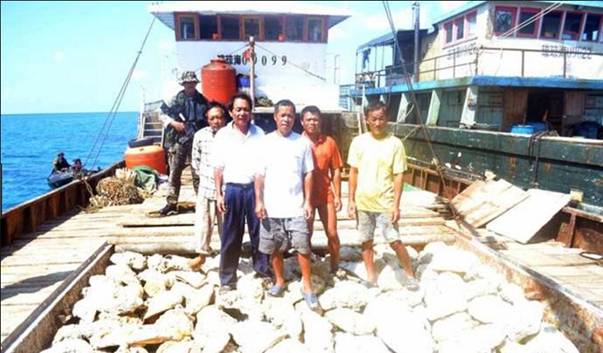 Chinese fishermen  on board a Chinese fishing vessel held by the Philippine Navy at the disputed Scarborough Shoal,  April 10, 2012

However, it remains a contested space between China, the Philippines, and Taiwan. On April 8, 2012, the Philippine Navy surveillance plane detected eight Chinese fishing vessels near the Shoal with illegal and endangered giant clams, corals, and live sharks, which were in violation of the Philippine law. The Philippines deployed the BRP Gregorio del Pilar, which was a decommissioned US Coast Guard cutter, to arrest the fishermen. The use of a military vessel for law-enforcement led to the Chinese deploying its paramilitary, coast guard, and naval forces who surrounded the Shoal. On June 15, 2012, after a ten week long naval stand-off, the Philippines conceded to China by withdrawing its vessels from the waters surrounding the Scarborough Shoal.2

The consequence of this was that the Chinese gained effective control of the Scarborough Shoal. Despite the fact that the then President of Philippines, Benigno Aquino III, shared a good relationship with Beijing,3 on the charges brought by the Philippines  a Tribunal was instituted, under the United Nations Convention on the Law of the Sea (the “Convention”) against the People’s Republic of China at the Permanent Court of Arbitration, at The Hague in 2012.4 China’s control over the Scarborough Shoal is based on its claims that it is part of its territory since ancient times. There have been instances of Chinese coast guard personnel taking away the catch of Filipino fishermen in Scarborough Shoal off the coast of Zambales, which is well within Philippines' 200-nautical mile Exclusive Economic Zone (EEZ).5 According to the ruling of July 12, 2016, delivered by the Permanent Court of Arbitration at The Hague, “…there was no evidence that China had historically exercised exclusive control over the waters or their resources. The Tribunal concluded that there was no legal basis for China to claim historic rights to resources within the sea areas falling within the ‘nine-dash line’….” “…The Tribunal also found that Chinese authorities were aware that Chinese fishermen have harvested endangered sea turtles, coral, and giant clams on a substantial scale in the South China Sea (using methods that inflict severe damage on the coral reef environment) and had not fulfilled their obligations to stop such activities…”.6

Since President Rodrigo Duterte took over office in 2016, there has been a marked improvement in the relations between the Philippines and China. There is an Enhanced Defence Cooperation Agreement (EDCA) was signed between the US and the Philippines in 2012 after the Filipinos Naval stand-off against the Chinese over the Scarborough Shoal. Despite this agreement, the US in 2016 blocked the sale of about 26,000 M4 rifles to the Philippine National Police (PNP) amid allegations that these may be misused in the name of the government’s war on drugs to target innocent Filipinos.7 As part of Beijing’s new wave of diplomacy it began to engage with countries with which it has unresolved issues over the SCS and after the US blocked the sales of arms to Manila, China by October 2017 had provided about 6,000 assault rifles, hundreds of sniper rifles, and small arms and ammunition to the Philippines.  By extending its support through transfer of arms to the Philippines, as a gesture of a ‘friendly and cooperative relations’, China is ensuring that the bilateral issue over the SCS does not get further escalated.8 Further, in 2018, China also donated four 12-metre-long boats and 30 rocket-propelled grenade (RPG) launchers to the Philippines.9 The Philippines has also been engaging with China in order to push its developmental and other connectivity projects. During the visit of Chinese President Xi Jinping to the Philippines from 20-21 November, 2018, both nations elevated their relations to a Comprehensive Strategic Cooperation. This new level of cooperation would include partnership in the area of oil and gas exploration with the Philippines as well as inviting China to participate in its “Build, Build, Build” infrastructure programme estimated to cost US $ 180 billion.10

However, from time to time Philippines had to also confront China on its illicit activities in the disputed SCS such as its military installations and deployments. The government under President Duterte like his predecessor President Aquino has continued to build its engagement with China while also being cautious in addressing the issues of the SCS. On December 30, 2017, when an aerial clip of the Fiery Cross Reef suggested that China was undertaking build-up of military facilities on the artificial island that were constructed through land reclamation, Philippines protested against China for reneging on its promise not to militarise these artificial islands. Presidential spokesman Harry Roque, while stating Philippines’ stand against militarisation in the area, also highlighted China holding on to its commitment of not reclaiming more islands, as a step towards strengthening bilateral relations.11 In another instance, in May 2018 it was reported that China has installed anti-ship cruise and surface-to-air missiles in the Fiery Cross Reef, Mischief Reef and Subi Reef. The Philippines maintained that the installations were not directed against them while stressing that it would undertake every diplomatic action to protect its interests.12 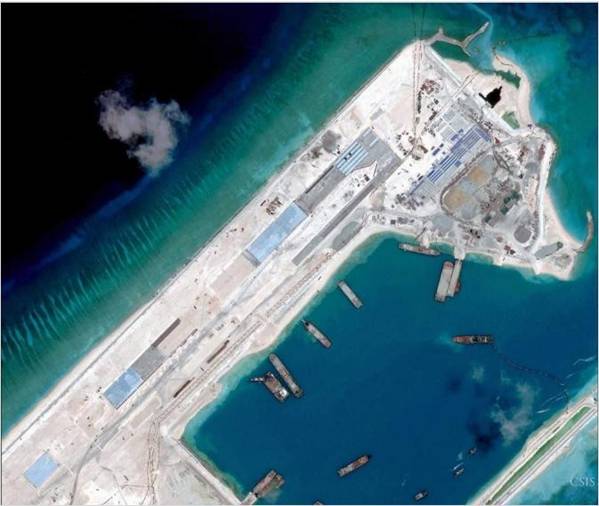 During a speech on March 26, 2018, Philippines Defence Minister, Delfin Lorenzana stated that the ongoing territorial dispute with China over the SCS continues to be a security challenge despite an improvement in the relations.14 His concerns were also reiterated by President Duterte at the Boao Forum held in April 2018 at Hainan, China, who admitted that relations with Beijing remain complex. However, the President emphasised on the relations as being mutually-beneficial and a key towards ensuring stability of Asia for real progress to be achieved.15 The Philippines has kept all channels of communication open towards resolving the territorial dispute and maintained that it would not declare war against Beijing over their dispute in the SCS.16

The Philippines has been engaging with its traditional partners such as the US through their joint military exercises. In the aftermath of the Islamic State in Iraq and Syria (ISIS) group supporters seizing the Southern Philippine city of Marawi in May of 2017, the threat from terrorism has become a major security concern for the Philippines.17 During the US-Philippines ‘Balikatan’ military exercise held in May 2018, 5,000 Philippine and 3,000 American soldiers took part over 12 days. The focus of the military exercise was on anti-terrorism, responses to natural disasters and crisis, and humanitarian assistance. The US government has also vowed to provide US $26.5 million to Philippine law enforcement agencies over the next two years to assist its counterterrorism efforts.18

While the Philippines seeks to address the dispute it has with China over the SCS, it does not seem to be doing so proactively despite the favourable 2016 verdict delivered by the international tribunal at The Hague. Instead we find the Philippine Government enhancing its partnership with China in the realms of infrastructure and connectivity projects as also its security ties rather than adopting a confrontational or a less than accommodative attitude.

8 “China gives guns to Philippines to Show its a friend, not a foe”, Reuters, October 5, 2017, https://uk.reuters.com/article/uk-philippines-china-defence/china-gives-guns-to-philippines-to-show-its-a-friend-not-a-foe-idUKKBN1CA0OK, accessed on July 24, 2019.

11 “Philippines to protest to China over apparent airbase on manmade island”, The Straits Times, January 9, 2018,http://www.straitstimes.com/asia/se-asia/philippines-to-protest-to-china-over-apparent-airbase-on-manmade-island, Accessed on January 10, 2018.

17“US-Philippine war games open under pro-China Duterte”, The Straits Times, May 7, 2018, https://www.straitstimes.com/asia/se-asia/us-philippine-war-games-open-under-pro-china-duterte, Accessed on May 8, 2018.