The Dismissal of Nawaz Sharif by Supreme Court Bench: An Assessment

The Dismissal of Nawaz Sharif by Supreme Court Bench: An Assessment

With the dismissal of Nawaz Sharif, Pakistan again faces a period of political instability. The Pakistan judiciary found him unfit to carry on as the Prime Minister of the country. He was dismissed by a five member bench of Supreme Court judges on July 28th, who gave a verdict not on the charges brought against him by the Panama leaks, but for not declaring income as the Chairman of Dubai-based Capital FZE, which dissolved in 2014. Such information came forth during the JIT interrogations of the Sharif family.

The judgment brought out by the bench declared Nawaz Sharif “not honest” under Article 62(1)(f) of the Constitution[1], and disqualified him for furnishing a false declaration under solemn oath, failing to disclose his receivables, constituting assets from Capital FZE, in his nomination papers in terms of Section 12(2)(f) of the Representation of People Act (ROPA) 1976, which made him ineligible to continue in the position of the Prime Minister of the country.

The usage of Article 62(1)(f) of the Constitution to remove an elected Prime Minister has also triggered a major controversy throughout Pakistan. There is scope for interpreting the law whether disqualification under Article 62 (1)(f) of the Constitution is permanent or for some specific period. Article 62 do not specify any time period unlike Article 63, which, for certain disqualifications were of temporary nature. It is on to the interpretation of a larger bench of the Supreme Court, who will be able to decide the nature of the disqualification, which remain open to interpretation presently.[2]

Human rights activists have also come out openly that why would be only politicians accountable on the issues of Sadiq and Ameen, while the military and the judiciary remain exempt from being tried under such laws. It has also been stated by protestors that whenever the Supreme Court takes suo motu notice and announces a decision, the aggrieved party loses the chance to appeal and can only file a review application. The demand is being made to the Parliament, for amending the law to give the right of appeal. But the Sharif has been removed from office not on the major cases that have been cited above and has to wait to bear the outcome of the verdicts of the Supreme Court to chart out a future plan of action.

In addition to disqualifying the prime minister, the apex court gave the National Accountability Bureau (NAB) six weeks to move a number of corruption references against members of the Sharif family before the Rawalpindi accountability court. Those who will have cases filed against them include Nawaz Sharif’s three children — Maryam, Hussain and Hassan Nawaz — his son-in-law retired Capt Mohammad Safdar and ex-finance minister Ishaq Dar.[3] Even after being dismissed from the Prime Ministerial position and the National Assembly, the investigation on other corruption charges against Sharif and his family continues. NAB has already issued summons to the Sharif family on the cases filed against them to appear before them on August 18th.[4]

The pending cases that haunt the Sharif’s are as following:

The military, whose representatives have been part of the JIT team[6], did not issue any major statements regarding the dismissal.  Director General Inter-Services Public Relations Maj Gen Asif Ghafoor clarified that the Pakistan Army had no direct role in the dismissal.[7] They have abstained from adapting a lead role, staying away from taking direct control of civilian power, like they did in the past, possibly as such political takeover might have a negative impact on the ongoing international economic projects in the country.

The civil military relationship between Sharif and the military establishment had been tense from 2014 onwards, with regard to the manner in which the corruption cases of General Musharraf was handled, the competition between the two administration with regard to championing the success of bringing the CPEC to Pakistan, in the name of counter terrorist operations, carrying out the Karachi operations, which, later on led to the friction in between PML-N with both the MQM and the PPP. This was followed by the media leaks which stated the rift in between the provincial administration and the military regarding the linkages in between terrorist groups and the army intelligence.[8] The present military leadership under General Bajwa has been more cautious in issuing statements. The role of the army remain to be extremely important in the maintenance of political stability in the present as well as the outcome of the national elections in 2018, in a nation which still remains to be a ‘praetorian state’.[9]

There following depics the nature of the present National Assembly along with the seat sharing in between the government and the opposition. 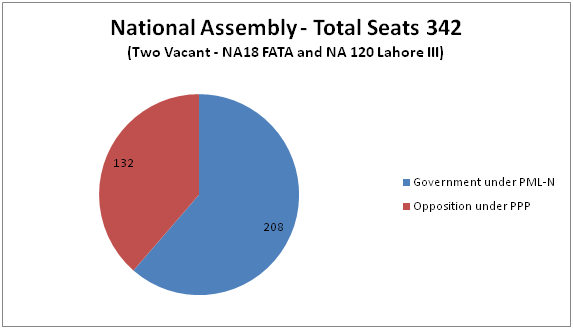 After the removal of Nawaz Sharif initially it was thought that Shahbaz Sharif, brother of Nawaz and Chief Minister of Punjab, would hold the office of the Prime Minister till the next elections to the National Assembly slated on 2018.[10] However, Shahbaz, not being a member of the National Assembly, would have to contest for the NA (NA-120 Lahore III). Till that point of time (45 days in total), PML-N with the advise of Nawaz Sharif selected an interim Prime Minister Shahid Khaqan Abbasi, who took office on August 1st. However, with the passage of time it was decided that Abbasi would continue as the Prime Minister of the nation till the next National Elections next year. Prime Minister Abbasi also made it clear that he was not just a ‘bench warmer’ for any sibling of the Sharif’s. Abbasi has taken a decision to strengthen PML-Ns position in the nation as well as fixing the anomalies in the relationship between the judiciary and the executive, within the executive and the civil-military relationship.[11]

There are also factions within the PML-N in Punjab, who do not want Shahbaz to leave the CM’s post from Punjab. They feel that it would weaken the position of Shahbaz in Punjab. They are of the view that instead of being an interim PM, Abbasi should continue to be the PM, till fresh elections are held. However, Abbasi’s dependence on Sharif while creating his inner cabinet shows that the importance of Sharif is not diminishing soon.[12]

Another reason for not selecting Shahbaz for the post of the Prime Minister is also associated with some challenges created by his son. Shahbaz suggested his son Hamza Shahbaz, the deputy Chief Minister of Punjab, as the probable successor of the Chief Ministerial position, if Shahbaz had to be the Prime Minister. Presently, the Punjab provincial assembly is being governed by an alliance led by PML-N along with Bahawalpur National Awami Party, Jamiat Ulama-e-Islam (F) and Pakistan Muslim League (Zia). Amongst the 371 total seats, the government coalition holds 317 seats, PML-N having 312 seats. The provincial elections are also due in 2018. But handing over the most important province to the son and the Prime Ministerial slot to the father, would have been a major risk for the Nawaz Sharif family. Hamza had also not openly defended Nawaz Sharif in the Panama Papers case, choosing not to comment too much on the issue.[13]

The manner in which the judiciary was involved in the removal of Sharif, and the controversial law that was used for such removal, means that most of the political parties have not been able to capitalize on the absence of Sharif from the helm of affairs. The NAB has hastened the proceedings against PPP co-chairperson Asif Ali Zardari along with late Prime Minister Benazir Bhutto who is accused of amassing wealth and assets both in Pakistan and abroad.[14] Similar cases have been pending against Imran Khan, Pakistan Tehreek-I-Insaf (PTI) chairman.[15] Will that strengthen individuals like Maulana Fazlur Rehman of Jamiat Ulema-e-Islam-Fazl (JUI-F) in the forthcoming months, or will it usher in fresh faces if the Supreme Court decides to permanently bar leaders convicted under the clause of sadiq and ameen.

It is now upto Prime Minister Abbasi on how he tackles the political conundrum, the growing crisis in between the organs of the government, while maintaining Pakistan’s political stand with its Eastern, Western and Northern neighbours, along with the souring relations with the West. The government’s strategy should be strengthening its relations with the military, maintain a stable strategic and political environment in the country while adopting the suggestions provided by international financial institutions for achieving rapid economic growth. It should focus on the maximum possible allocation of resources for economic development and betterment of the energy situation of the nation. The forthcoming months will remain extremely challenging for the civilian political leadership till June-July 2018, when the next general elections are held in Pakistan.

[1] Nawaz Sharif remains to be one of the first elected representative to be removed on grounds of not being “honest” [Sadiq] and “truthful” [Ameen] under Article 62(1)(f) of the Constitution.

[2] Tariq Mehmood, former president of the Supreme Court Bar Association, stated that a larger bench of the Supreme Court was seized with a number of cases, including those of Samina Khawar Hayat and Mohammad Haneef, in which the moot point was to determine whether disqualification under Article 62(1)(f) of the Constitution was perpetual or not. Former chief justice Anwar Zaheer Jamali, while hearing one of such cases, had wondered how anyone could be disqualified from participating in elections forever on the basis of Articles 62 and 63 of the Constitution, saying people could reform themselves to be qualified under the provisions after being disqualified at some point of time. Under Article 62(1)(f) no period of disqualification had been specified, but it would depend on the verdict of some cases that were pending to determine should the application of Article 62(1)(f) be restricted to the current election or to all times to come. “Legal experts divided on period of Sharif’s disqualification”, Dawn, July 29, 2017, https://www.dawn.com/news/1348338 (accessed on August 17, 2017)

[6] There were questions raised regarding the eligibility of the officers selected in the investigative team and their nature of involvement. “Pakistan faces new political turmoil as PM Sharif ousted in wealth probe”, Daily Mail, July 28, 2017, http://www.dailymail.co.uk/wires/reuters/article-4738748/Pakistan-PM-Sharif-dismissed-office-damning-probe-family-wealth.html#ixzz4pypW035g (accessed on August 17, 2017); Talat Masood, “Too early to rejoice”, The Express Tribune, August 2, 2017, https://tribune.com.pk/story/1471873/too-early-to-rejoice/ (accessed on August 17, 2017)

[10] The NA 120 is the vacant seat Shahbaz Sharif will be contesting for to be member of the NA so as to get elected as PM. This seat has become vacant due to the ouster of Nawaz Sharif. Petroleum Minister Shahid Khaqan Abbasi has been selected to be the interim Prime Minister (for a tenure of 45 days). PTI (33) (3 expelled but still members of NA; they will either abstain in voting or will vote for PTI, as they cannot vote for other candidate as per the constitution), MQM (24) (Asif Hasnain has changed party to Pakistan Sarzameen Party, but is a member of the NA on a MQM ticket