The Electoral Winds in Spain

It is likely that Spain is headed for a third successive hung parliament and there are chances that a right of Centre government may come to power in Spain as happened in the case of Andalusia region.

Spain, Western Europe’s youngest democracy, will have its third general election in less than four years on April 28, 2019. This election is crucial because Spain in many ways represents the last frontier of Socialist parties holding on to the reins of power in Europe with the far-right parties sweeping elections in many countries. The rise of the far-right in Spain for the first time since the death of General Franco has sparked fears of the country tilting towards the nationalist right. A crucial question that the results of the impending election will answer is whether Spain would be part of the trend that has manifested itself in many other countries? 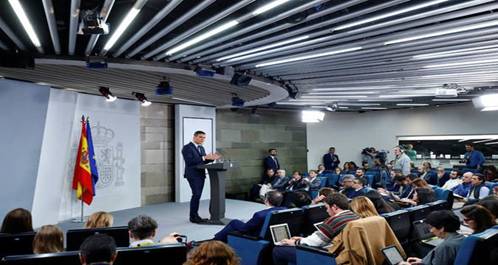 Run Up to the Elections

Partido Socialista Obrero Español (PSOE) or the Spanish Socialist Worker’s Party, which held the reins of power by wresting control from Mariano Rajoy, the Spanish Prime Minister in 2017, in a vote of no confidence was never expected to run its full term. It was hanging by the thread under the leadership of Prime Minister Pedro Sanchez with 84 (24%) of the 350 seats in the Congress of Deputies with the support of Basque and Catalan Nationalist parties. It is these Catalan parties that voted with the opposition on the issue of national budget that proved to be his undoing. But an important question then arises is ‘how did Sanchez run aground’?

Compared to the conservative People’s Party which has a tougher stance on Catalonia, Prime Minister Sanchez adopted a more conciliatory attitude towards Catalonia and argued that deliberations could be held with the Catalans within the rubric of ‘constitutional framework’. He had withdrawn the judicial appeals against the Catalan laws by the previous governments and his ministers advocated the release of those held in pre-trial detention.1He even initiated talks with regional leaders in Barcelona to defuse tensions as Madrid geared up for the trial of Catalan Separatist leaders. The minority government headed by Sanchez required the support of the Catalan parties. His softer approach earned him the wrath of opposition parties who termed him a ‘traitor’.2 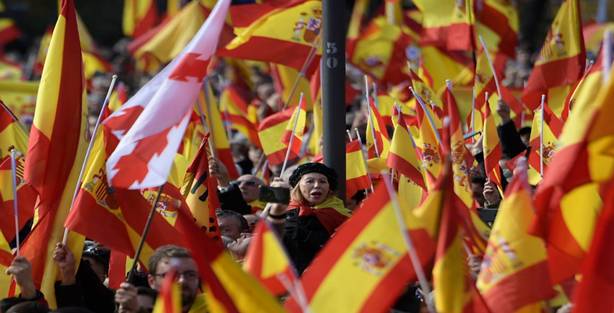 (Demonstration by Vox in Madrid against Catalan Separatist on 10 February 2019. Image: AFP via Getty Images)

In this precarious situation, the adoption of the national budget 2019 coincided with the trial of Catalan Separatists leaders in February 2019, which as expected, was resented by the Catalan pro-independence parties- the Catalan Republican Left and the Catalan European Democratic Party. Even though the government tried placating the Catalan parties by proposing 18.5% increase in public investment in Catalonia3in the budget but the Catalan parties4 voted with the conservative People’s Party (PP) and centre right Ciudadanos (Citizens party), defeating the budget by 191 votes to 158.5 This defeat led Sanchez to declare snap elections in a televised address emphasising that, “between doing nothing and continuing without the budget, and calling on Spaniards to have their say, I choose the second. Spain needs to keep advancing, progressing with tolerance, respect, moderation and common sense.”6 The demand of Catalan parties pertaining to self-determination was making it increasingly difficult for Sanchez to run the government.

Spain has had a stable two party system and has been ruled by one or the other of the two parties, namely the PSOE and PP. However, for the first time, there are five electoral parties in the fray, a trend that needs to be kept in mind. These five parties are the Socialists (PSOE), Podemos, Ciudadanos, People’s Party (PP) and Vox. Out of these five, Vox- an ultranationalist party was formed only in 2013 and is one advocating the rescinding of gender violence laws because they are biased against men. It has registered a meteoric rise in its fortunes on the question of Catalonian independence and immigration. The party advocates abolishing Spain’s system of decentralized governance and centralizing power in Madrid. They seem to be benefitting from the perception that both the Popular Party (under whose watch Catalan Referendum took place) and Socialists have proved inept in dealing with the Catalonia crisis. According to an opinion poll published by El Periodico newspaper, Vox could win up to 46 seats out of 350. Another newspaper La Vanguardia pegged Vox’s share to 16 seats. Spaniards have resisted the pull of the right so far but given the predictions for Vox, irrespective of the numbers, its entry into Spanish Parliament will be a first since the death of General Franco. 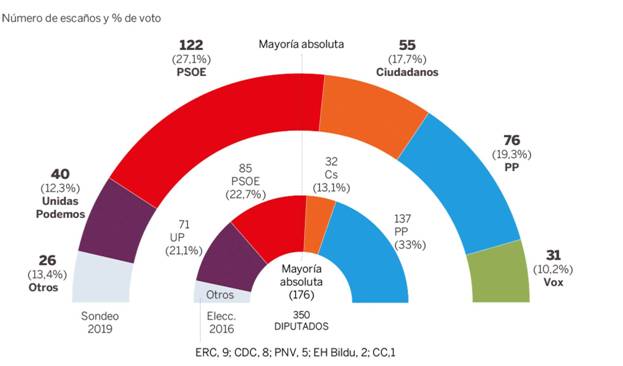 The incumbent PSOE will bank on socially progressive decrees passed under Pedro Sanchez on the issue of wages, paternity leave, addressing gender pay gaps and having a record number of women in his cabinet.8He also tried to deal with the issue of Catalonia with more empathy but was caught in a bind between acceding to their demands and upholding Spanish integrity. Nevertheless, the opinion polls give Sanchez a clear edge in parliament with PSOE projected to emerge as the single largest party. He is expected to win 122 (27.1%) seats according to an opinion poll published by El Pais daily. PSOE is followed closely by the People’s Party (PP) with 76 (19.3%) seats.

The PP on other side is said to be experiencing the flight of its support base to Vox and the Ciudadanos Party. In a bid to match the Vox rhetoric, PP has also begun to talk tough on issue of immigration, Catalonia and on the issue of abortion. Their current leader Pablo Cassado, who unlike Rajoy indulges in more public speaking and interviews, has stated that he would prefer a return to the restrictive abortion laws in 1985 rather than the current law which allows for abortion on demand during the first trimester. PP has also spoken against the universal healthcare restored by the PSOE government as against the restrictions imposed by PP government on irregular migrants. In an effort to woo voters, it is using social media applications such as WhatsApp to reach a wider audience.

Ciudadanos (Citizens Party) is not far behind. The party which described itself as a centrist liberal party is also trying to hold its ground against the rising right. The party is expected to play the role of kingmaker in any government formation in Spain as neither PSOE or PP appear to be single handedly achieving the majority of 176 even when factored with their alliance partners as in the case of PSOE and Podemos, and PP and Vox. PSOE’s partner Podemos is projected to win 40 (12.3%) seats.9 To stay in power, PSOE will need alliance partners but Ciudadanos has ruled out any prospect of cooperation with the PSOE. It has announced that, “no vote that goes to Citizens will serve to Sanchez to continue as president of the Government”.10Ciudadanos is a party that has its origins in Catalonia. The party though liberal in its position on economic issues finds it difficult to resonate with Sanchez’s position on Catalonia. Rather, it has a tougher nationalist stance on Catalonia. Many argue that ruling out alliance with the Socialists is Ciudadanos defensive strategy to stop the defection of voters to Vox.

The upcoming election, in this scenario appears to be a battle between PSOE on the one side and a combination of centre and right parties on the other. The opinion polls give Sanchez’s Socialist Party marginal advantage against his rivals, but returning to office seems difficult for him. His return to power will only be possible with the help of Basque and Catalan regional parties; the very parties that forced him to declare snap elections. In this scenario, Ciudadanos may align with PP and Vox at the national level and replicate the model they have tried in Andalusia region. In Andalusia, traditionally a socialist stronghold, even though PSOE gained the maximum number of seats, yet it was unseated by a combination of PP, Ciudadanos and Vox. However, what may work for Sanchez is that the vote bank of the socialists is not divided, while in the case of PP and Ciudadanos, they are threatened by the rise of Vox that is cutting into the votes of these parties.

Any analysis of Spanish election needs to take cognizance of the fact that these elections are being held under the shadow of the trial of the Catalan Separatist  leaders  and  hence, the issue of Catalan independence will continue to swing fortunes in this election. The fall of the socialist government, the rise of Vox, the defection of voters of PP and Ciudadanos have all been triggered by one event, Catalonia’s push for independence. Its 2017 breakaway bid is still raw. The society is divided between those who want reconciliation and those who want the government to take a hard-line stand. The region’s unsuccessful bid to secede from Spain has given a fresh boost to Spanish nationalism, which was dormant since Spain’s transition to democracy in 1970.11

Spain is the fifth largest economy in the Euro zone. It has emerged from the economic downturn in 2013, but it needs a stable government to continue on the path of economic recovery. Given the trends forecasted by pre poll surveys, it is likely that Spain is headed for a third successive hung parliament. The PSOE might be able to get the highest number of votes but the projected figure falls short of the majority required for government formation. There are chances that a right of Centre coalition government may come to power in Spain as happened in the case of Andalusia region.12 An unstable coalition government or a deadlock- the likely outcomes of these elections can lead to political instability which does not augur well for the country.

1Politico (2019), “Pedro Sanchez to Catalonia- Thank you, Next”, Accessed on 5 March 2019, URL: https://www.politico.eu/article/spain-pedro-sanchez-to-catalonia-independence-thank-u-next-quim-torra/

3 The Economist (2019), “The Catalan issue pushes Spain to the brink of yet another election”, Accessed on 7thMarch, 2019, URL:https://www.economist.com/europe/2019/02/16/the-catalan-issue-pushes-spain-to-the-brink-of-yet-another-election

4The separatists had said they would support the budget only if Sanchez was open to discussion on self-determination for the region.

8 Independent (2019), “Spain election: Voters split over how to bring country together after Catalonia crisis”, Accessed on 16 March 2019, URL: https://www.independent.co.uk/news/world/europe/spain-election-catalonia-referendum-pedro-sanchez-vox-a8826401.html

12 However, one differentiating feature from far-right parties in other countries and in Spain is that all parties in Spain favour European integration and are not ‘Eurosceptic’.