India-United States relationship has witnessed growth in the past few years in the defence sector. From a period of roadblocks and restrictions on India, the United States is actively seeking Indian defence partnership and export orders. The two nations are developing a defence relation for deeper military cooperation that will contribute to stability into the region. As the two nations engage with each other through trilateral and multilateral processes, the 2+2 dialogue process is a platform to engage bilaterally on issues that are of mutual concern to both nations.

The maiden 2+2 dialogue between India and the United States was held in India in 2018. A year on, the relations between the two democracies has grown in the defence sector with India buying US defence hardware, the two countries implementing the Communication Compatibility and Security Agreement, building closer cooperation on matters of global concern such as terrorism and working together towards the development of a free and open Indo-Pacific. This is not to say that they have not had differences especially in the trade sector with President Donald Trump implementing trade tariffs and terminating India’s preferential trade status. Nonetheless, differences have not become a roadblock to the overall growth that the relationship has witnessed in the past decade and has laid the foundations for the future trajectory of the relations.

India-US Relationship: An Overview of the Past Ten Years

After the civil nuclear deal (2005), the United States supported India’s membership to the four export control regime groupings in 2008. India has since then, except for the Nuclear Suppliers Group (NSG), become member of the Wassenaar Agreement, the Australia Group and the Missile Technology Control Regime (MTCR). In the economic sphere, taking the relations ahead, U.S. Treasury Secretary Timothy Geithner during his visit to India in 2010 launched the U.S.-India Economic and Financial Partnership with the then Indian Finance Minister Pranab Mukherjee. The ministerial level meetings laid the foundations for stronger bilateral economic relations between the two nations. India and the United States also held their first Strategic Dialogue (2010) encompassing mutual security and economic dimentions. Since then India has signed a Memorandum of Understanding (MoU) on cyber-security, banking and the energy sector, with emphasis on renewable energy, with the United States. The two nations established the security principles that would help guide the relations in 2015 by announcing the “Joint Strategic Vision for the Asia Pacific and Indian Ocean Region.”

Considerable progress has been made in the defence sector. From a period of roadblocks and restrictions on India, the United States is actively seeking Indian defence partnership and export orders. India is the largest defence equipment importer in the world and in the US, defence industry, including aerospace, plays a critical role in America national security policy. By some estimates, in just 2018, the US defence industry contributed close to US$ 929 billion to the US GDP. Overall, it employs closed to 2.5 million people in the US alone, forming 20 percent of the manufacturing base of the country.[i] The Trump administration has laid emphasis on the revival of the manufacturing industries in the United States, and the defence and aerospace industry play an important role in contributing towards this goal.

To enable transfer of defence equipment and technology to India, the United States recognised India as a major defence partner in 2016. The status allowed India to be treated at par with the United States treaty allies, while not being one itself. It paved the way for smoother procurement of weapons’ systems and other platforms, along with transfer of technology for India’s defence inventory. The two nations also signed an agreement for deeper military cooperation, with the defence relationship being acknowledged as ‘anchor of stability’ in the region.

The joint statement released during the first meeting between Prime Minister Narendra Modi and President Donald Trump in 2017, reiterated that a “...close partnership between the United States and India is central to peace and stability in the region.”[ii] The two leaders also agreed to further strength cooperation in the defence and security sector. The United States offered the sale of ‘Sea Guardian Unmanned Aerial System’ to enhance India’s capabilities and promote shared security interests. The Sea Guardian is an armed drone that will be used for maritime surveillance off Indian coasts. ‘The Trump administration has approved the sale of armed drones to India and has offered integrated air and missile defence systems aimed at helping the country boost its military capabilities and protect shared security interests in the strategically important Indo-Pacific region.’[iii] 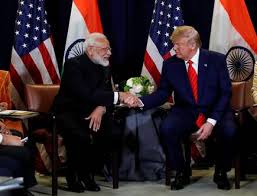 A study of the India-US strategic relations in the past few years, points to a shift in understanding the threats that arise from building their respective maritime domain awareness.

As land connectivity is bolstered, it needs to be augmented with the security of sea lanes. The oceans continue to be the highway for international trade and commerce. The peace and safety in the waters of the Indo-Pacific and the Indian Ocean in particular is of vital for both India and the United States. It is with this view in mind that the two nations have realised that “no area of defence cooperation holds more promise than maritime cooperation. India is increasingly concerned about the Chinese naval presence in the Indian Ocean, particularly when viewed through the prism of China’s steady escalation of tensions in the South China Sea. [iv] The United States national defence strategy has stated that China is a strategic competitor which is intimidating its neighbours through its predatory economic and military strategies.

India and the United States are engaged in the region to address non-traditional threats such as anti-piracy operations in the Indian Ocean region, addressing the problems of trafficking and cooperating as critical responders in case of humanitarian and/or natural disasters. To provide seamless cooperation the two nations have also agreed to share data on surveillance and intelligence.

Deepening the partnership allows India to develop its capabilities to be a ‘net security provider in the region’. For the United States, India is a partner that can help reduce the strain on the American security apparatus and share the security burden.

The impetus for building closer cooperation was taken forward by the first 2+2 dialogue held in India in 2018. The dialogue recognised “...the growing defence ties between the two countries, growing military to military interactions, joint exercises and growth in bilateral defence trade and qualitative improvement in levels of technology and equipment offered by the United States. India welcomed its inclusion into the list of countries for licence free export and re-export and transfer under Licence Exception Strategies.”[v]

Before the 2019 dialogue the two nations have taken steps to further build the security partnership. The United States administration has cleared the sale of naval guns, helicopters and other equipment to India with the stated goal of strengthening the security interests of a ‘strategic regional partner’. The Indian government has approved a request by the Indian navy for additional maritime surveillance aircrafts. The approval of the sale is a clear indication of the convergence in the interest of the two nations. 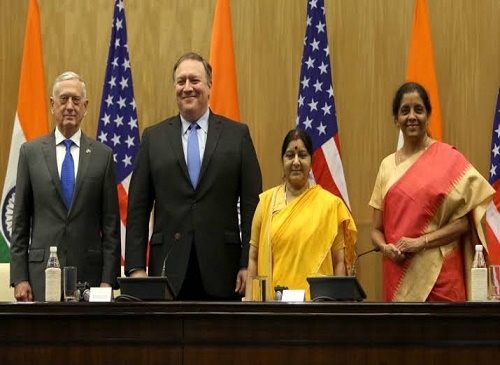 The 2019 Dialogue held in the United States emphasised on the “...deepening bilateral strategic and defence cooperation, exchanging perspectives on global developments, and shared leadership in the Indo-Pacific region.”[vi] The 2019 Dialogue along with the India-US Maritime Security Dialogue (2019) have identified the shared security concerns and priorities of the two nations in Indo-Pacific region. It has also laid the process of multilateral engagements that will help the two nations to achieve their maritime security objectives within the ambit of the broader India-US strategic vision. As stated by Mr. S. Jaishankar, Ministry of External Affairs, “Operationally, it is only logical that instead of trying to set up new architecture, we work with architecture that already exists. ...While the nations of the eastern Indian Ocean and States on the connecting seas leading to the Pacific are defining their vision of the Indo-Pacific, there is room for a western Indian Ocean version of this concept too.”[vii] India is keen to build an end to end architecture that will cover all areas of shared interests of all in the region. 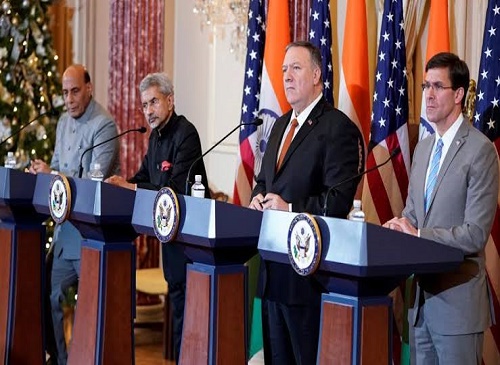 The underlying principle for India has been to ensure that the region “remains open and free for inclusive partnerships with all within the parameters of sovereignty, equality and rules based system.”[viii] The strategic importance of free and open sea lanes have gained significance in the face of competing claims over territorial waters. They will gain even more importance as the oceans are harnessed for renewable energy and development of blue economy.

The dialogue between the two important ministries of the government encompassing a range of issues allows unhindered space to discuss and inform the other side of respective policy decisions and requirements. It allows them to discuss bilateral, regional and global threat, build converging strategies to combat terrorism, advance maritime security and strengthen people to people connect.

There is little doubt that the 2+2 dialogue has provided India and the United States with a platform to further propel the bilateral relations to meet the opportunities and challenges of the future.

[i]Figures have been taken from the 2019 state of the American aerospace and defense industry published by the Aerospace Industries Association, an association of American defence and aerospace companies. It is available at https://www.aia-aerospace.org/wp-content/uploads/2019/06/AIA-2019-Facts-and-Figures.pdf, Accessed on 23 Dec. 2019