The foundation of the United States –Saudi Arabia relations is largely based on the security partnership shared between the two. As Saudi Arabia starts to reset its relations with Russia and build a partnership with China, the Trump Administration and the US Congress need to build coherent policies to overcome the perception that the United States is an unreliable partner.

The United States (U.S.) has views the Kingdom of Saudi Arabia as a strategic partner in the ever-turbulent Middle East and as a bulwark against the growing influence of Iran.“Saudi Arabia’s unique role in the Arab and Islamic worlds, holding of the world’s second largest reserves of oil, and its strategic location all play a role in the long-standing bilateral relationship between the Kingdom and the United States.”[i]The relations have been able to weather many challenges in the past, including the 9/11 terrorist attacks in which fifteen of the nineteen hijackers were Saudi citizens. Nonetheless, as President Donald Trump focuses on an ‘America First’ policy, the US administrations disruptive foreign policy decisions and the differences between the White House and the US Congress on US’ Saudi policy, has promoted to Saudi Arabia to diversify its foreign policy towards China and Russia, and away from a dependence on the United States. The United States needs to make an effort to make some changes to its alliance with one of its most important partners in a turmoil hit region.

The United States relations with Saudi Arabia have been based on security cooperation. United States’ military cooperation with the Kingdom peaked during the Gulf War (1991) when US troops were based there and the Kingdom allowed its territories to be used for refuelling of jets and transport of essential provisions for troops. It would be safe to say that it forms the foundation of the partnership between the two countries. “Saudi Arabia is the United States’ largest Foreign Military Sales (FMS) customer, with over $129 billion in active cases. Through FMS, the United States has supported three key security assistance organisations in Saudi Arabia—the Ministry of Defense, the National Guard, and the Ministry of Interior.”[ii]

In May 2017, President Trump visited Saudi Arabia on his first official overseas visit-a sign of the priority the Kingdom and the region had in United States foreign policy under his administration. 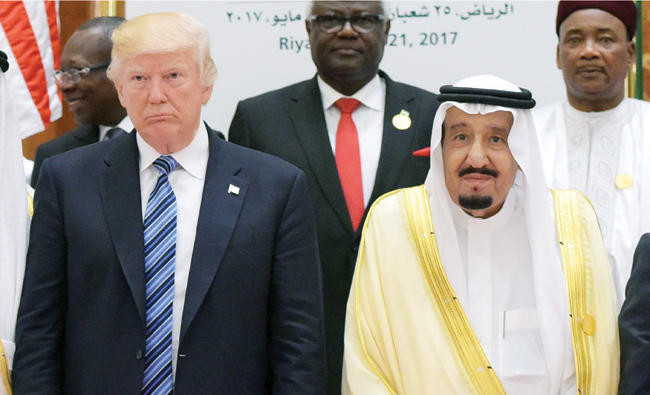 The visit was seen as an opportunity to reset the relations that had witnessed differences over the Iran nuclear deal (2015) signed by President Barack Obama. During the visit, President Trump signed a Joint Strategic Vision Statement with King Salman bin Abd al-Aziz Al Saud promising close collaboration to counter violent extremism, disrupt the financing of terrorism, and to advance defence cooperation. They also signed a “defence package for almost US$110 billion worth of defence capabilities. This package of defence equipment and services supports the long-term security of Saudi Arabia and the Gulf region in the face of malign Iranian influence and Iranian related threats. Additionally, it bolsters the Kingdom’s ability to provide for its own security and continue contributing to counterterrorism operations across the region, reducing the burden on U.S. military forces.”[iii] Since then, the role of Saudi-led military coalition in aggravating the perilous conditions in Yemen’s civil war has led the U.S. Congress to question the continued military assistance to Saudi Arabia, which relies on American weapons to conduct its war. U.S. military equipment was used by the coalition in a series of attacks that killed many civilians, many of them children. A CNN investigation[iv] further stated that Saudi Arabia and its coalition partners had transferred U.S. military equipment to militias in fighting in Yemen to buy their loyalties. This violates the terms of agreement with the United States and poses a challenge for American troops if the technology and weapons are redirected to Iran. These revelations were made even as the U.S. Congress expressed its outrage over the brutal killing of Mr. Jamal Khashoggi, a journalist critical of Saudi Arabia’s monarchy, in Turkey. In July 2019, the House of Representatives voted on three resolutions to block the sale of weapons and equipment to Saudi Arabia and the United Arab Emirates (UAE) - led coalition citing human rights violations and the rising number of civilian deaths in Yemen. President Trump used his veto powers by declaring a national emergency over tensions with Iran to step aside objections raised by the Congress and approved the sale of US$ 8 billion worth of military equipment to Saudi Arabia, UAE and Jordan.

The Challenges before the US-Saudi Alliance

Shifting geopolitical interests and emerging economic opportunities has provided Saudi Arabia with an opportunity to diversify its foreign policy with their own ‘Pivot towards Asia”. This coupled with the uncertainty over United States foreign policy under President Trump, his transactional approach to relations and the withdrawal of the United States from trade agreements and other multilateral agreements and the ‘America First’ approach has led to a perception that the United States cannot be relied upon. Saudi Arabia is resetting its relations with Russia and deepening its relations with China-two nations that are strategic competitors of the United States.

Russia and the Kingdom have largely been on opposites sides of the negotiating table. While Russia is supportive of Iran and the Iran nuclear deal, Saudi Arabia has hostile ties with Iran and was one of the main parties that urged President Trump to withdraw from the nuclear deal. Russia has supported President Bashar al-Assad’s government while Saudi Arabia has supported the insurgent groups in the civil war in Syria. Russia is also working towards a political solution to the Yemen war, which is also in the interest of Saudi Arabia. In contrast, the United States has announced its decision to withdraw troops from the Syria, abandoning allies in a crisis. Whereas the United States continues to be the net security provider in the region, there is a perception that security of the Middle East is no longer of strategic importance for the former. This contrasts with the continued support Russia has provided its allies.

In 2017, King Salman visited Moscow, a first ever visit by a Saudi monarch to Russia, an indicator of Russia’s recognition as a major party in Middle Eastern politics. They are in talks to work together in the oil and gas sector, with Saudi Arabia exploring the option of acquiring stakes in Novomet, Russia’s largest oil and gas subcontractor. Saudi Arabia is also looking for opportunities to finance non-energy sectors in Russia such as infrastructure development through the Russia-Saudi Arabia Investment Fund. Reciprocally, Saudi Arabia is keen for Russian investment in the Kingdom’s ‘Vision 2030’ plan, which is aimed to diversify the Saudi economy from oil to other sectors. 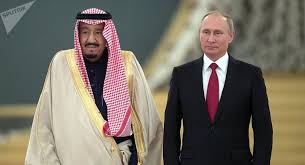 President Vladimir Putin during his visit to Saudi Arabia (2019) proposed a defence relation between the two nations, including the sale of military hardware from Russia such as the S-400 surface to air missile. A defence partnership with Russia would complicates its relations with the United States, it major defence partner at the moment. The United States has refused Turkey, a NATO ally, to participate in its F35 programme because of Turkey persisting with its purchase Russia defence equipment.

As the United States becomes more self-sufficient as an exporter of oil, China has emerged as the largest market for Saudi oil. Nonetheless, unlike the United States, China is developing economic linkages with the region as well as Saudi Arabia. This was reflected in the China-Arab States Cooperation Forum, to leverage its economic development as a tool to help combat the security and humanitarian crisis facing the region. 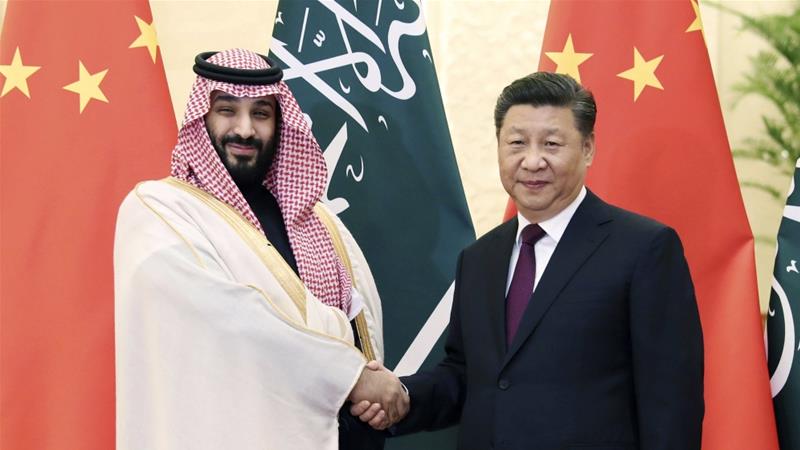 Saudi Arabia is China’s largest partner in the Middle East. In February 2019, Crown Prince Mohammed bin Salman met with President Xi Jinping during his tour of Asia. “This meeting came at a time when both China and Saudi Arabia are under increasingly harsh criticism — particularly on the issue of human rights — from the West and thus are eager to find political support as well as business opportunities from new partners.”[v]Beijing and Riyadh signed a US$28 billion trade deal that included plans for Saudi Arabia to build a US$10 billion petrochemical complex in China that will refine and process Saudi oil. As China’s economic leadership grows in the region through control over infrastructure projects such as rail and road as well as port development, it may in the future prove to a logistical challenge for the United States.

The United States needs to also disperse the perception that it is withdrawing from the Middle East. The United States strategic interests in region have changed as a result of the natural gas revolution in America and it is looking to scale back its military presence in the region. This scale down needs to be augmented with diplomatic and economic outreach.

The growing differences between the White House and the US Congress on policy decisions regarding Saudi Arabia and the region in general has meant that the traditional partners in the region are unsure of United States’ commitments. The United States’ partners and allies in the region are also looking to diversify their foreign relations from a heavy dependence on the United States. While it is the sovereign decision of Saudi Arabia to pursue foreign relations with other nations, the United States needs to take steps to reach out to its allies in the region to safeguard the American global and security interests. “The Middle East’s central location between Europe, East Asia, and Africa makes it geographically vital to U.S. interests. The rise of China had not changed that. U.S. lines of communication and supply between Europe and Asia pass directly through the Middle East. U.S. maritime strategy requires sailing carrier and expeditionary strike groups, submarines, and logistic ships between combatant commands, and passing through the Suez Canal is far more efficient than rounding the Cape of Africa.”[vi] And while the United States is no longer dependent on oil from the region, it allies and partners around the world need uninterrupted and stable prices energy from the region. Disruption in the trade and security in the region would have global consequences.

A reduced engagement with the region by the United States provides Russia with an opportunity to build political alliances that support a balance of power favourable to its interests. The United States needs to build a long-term policy for its engagements with the region, keeping in mind the changing geostrategic realities on ground. It needs to calculate Russia’s ambitions and China’s expanding outreach to the region. The Trump administration has focused on strengthening U.S.-Israel relations, fighting the ISIS and supporting Saudi Arabia and the UAE in their efforts to isolate Iran and its partners. Nonetheless, there has been no coherent policy as was evident from its policies towards Palestine, shifting the U.S. embassy in Israel to Jerusalem, withdrawing support from the Kurdish forces that helped fight the ISIS and announcing the withdrawal of U.S. forces and now scaling it back again.

[vi]Seth Cropsey and Gary Roughead, “A U.S. Withdrawal Will Cause a Power Struggle in the Middle East,” Foreign Policy, https://foreignpolicy.com/2019/12/17/us-withdrawal-power-struggle-middle-east-china-russia-iran/, Accessed on 03 January 2020.